DRIVING THE WEEK: On Tuesday, President Obama will host a small group of Jewish leaders at the White House to discuss the Iran agreement. Also on Tuesday, Israeli Prime Minister Benjamin Netanyahu will address American Jews via a webcast organized by JFNA and the Conference of Presidents. In addition, AIEF is bringing a group of Democratic members of Congress, led by Democratic Whip Steny Hoyer, to Israel this week. Thursday is the GOP’s first presidential debate of the 2016 season.

BEHIND THE SCENES: “Pro-Israel Lobby Accepts White House Briefing — On Its Own Terms” by John Hudson: “In Washington, most lobbying groups need to beg the White House for a meeting with the President of the United States. But if the lobbying group in question is AIPAC, the most powerful pro-Israel shop in the country, it’s the White House that does the begging… The first invitation couldn’t accommodate AIPAC and the more than 600 activists it flew in from around the country — so the White House kept trying.”

“The briefing clearly didn’t go as the administration officials intended. According to one person in the room, AIPAC officials refused to allow a question and answer session — an unusual restriction to impose on top officials of McDonough, Sherman and Szubin’s stature… The lack of questions gave some people the impression that AIPAC was afraid to give its activists too much exposure to the Obama administration’s arguments in support of a deal. AIPAC disputes that version of events entirely.” [ForeignPolicy]

TOP TALKER: “Growing signs Schumer will oppose Iran deal” by Manu Raju and Burgess Everett: “More than 10,000 phone calls have flooded his office line the past two weeks, organized by a group looking to kill the deal. Another group has dropped seven figures on TV in New York City to pressure Schumer and other lawmakers to vote against the plan. The powerful AIPAC has put its muscle behind an effort to lobby the New Yorker against it.”

“People who have spoken with the senior New York senator believe the pressure campaign is having an effect: They say there is a growing sense inside and outside the Capitol that Schumer will vote against the deal when the Senate considers it in September. The bigger question many have now is this: How hard will he push against it?” [Politico]

“Cardin a key figure in debate over Iran nuclear deal” by John Fritze: “Cardin is “in an incredibly unenviable position,” said Ronald Halber, executive director of the Jewish Community Relations Council of Greater Washington, which has not yet taken a position on the agreement. “There’s not a moment of peace that poor guy is getting.” “There’s a lot of interest, lots of letters,” Cardin said in an interview on Capitol Hill last week after attending a three-hour hearing on Iran — the latest of several held in recent weeks. “The majority of my day is spent on this.” [BaltimoreSun]

“An Iran-Deal Skeptic Becomes a Supporter” by Jeffrey Goldberg: “Adam Schiff, in a telephone call over the weekend, told me that, based on an “extensive review,” he has decided to come out in favor of the deal. He said he plans to formally announce his support later on Monday, but that he has already informed the White House of his intentions. His decision should carry some weight with national security-minded Democrats, and with still-undecided members of the House Jewish caucus.” [TheAtlantic] • “Elizabeth Warren says she’ll back Iran nuclear deal” [BostonGlobe]

Ted Cruz spoke at Nessah Synagogue in Beverly Hills on Saturday: After being introduced by Rabbi Shmuley Boteach, Cruz, wearing a white kippah which subsequently fell off until he was handed a bobby pin, began his remarks, “You know the thing about it is, ten gallon hats stay on easy. It is truly a blessing to be welcomed into your synagogue on this Sabbath. You know, this week’s Torah reading covered the Ten Commandments, a topic rarely discussed or followed in D.C.”

–On Iran: “One consequence of this deal if it is consummated is that the U.S. will become the world’s leading financier of radical Islamic terror… Sadly, a fellow Republican, Mitt Romney, sent a tweet this week saying that acknowledging that fact was over the line and the rhetoric was not helpful. Well… the truth is not rhetoric.”

–On Jerusalem: “Let me finally say, in January of 2017, there will be a new President in the White House. In 2017, if I am fortunate enough to be elected President, the U.S. will finally move our embassy to Jerusalem. Thank you, God bless you, and next year in Jerusalem.” H/T Aron Chilewich

Hillary Clinton’s Speeches: “Hillary topped out at $400,000 for a speech to the Jewish United Fund/Jewish Federation of Metropolitan Chicago. Her standard rate was $225,000.” [FirstDraft]

2016 WATCH: Maureen Dowd — “Potent friends of America’s lord of latte, Howard Schultz, have been pressing him to join the Democratic primary, thinking the time is right for someone who’s not a political lifer. For the passionate 62-year-old — watching the circus from Seattle — it may be a tempting proposition. After coming up from the housing projects in Brooklyn, Schultz reimagined Starbucks and then revived it. He has strong opinions, and even position papers, about what he calls the fraying American dream.” [NYTimes]

“New Jersey’s Monmouth County Is A Political Fundraising Hotspot” by Heather Haddon:“As with the Hamptons, inhabitants are turning to politics this summer, with the 2016 presidential race looming. Candidates for the White House are descending on Monmouth County to fatten their campaign war chests at private clubs facing the Navesink River estuary, along with inland estates sitting on former horse farms.” [WSJ]


**Good Monday Morning! Enjoying the Daily Kickoff? Please share us with your friends & tell them to sign up at [JI].  Have a tip, scoop, or op-ed? We’d love to hear from you. Anything from hard news and punditry to the lighter stuff, including event coverage, job transitions, or even special birthdays, is much appreciated. Email [email protected]**
RISING STAR: “Alex Shashou, the Harry Potter of Hotel Stays” by Steven Butler: “For some, a hotel is an indulgence in luxury living, and for others it’s a necessary evil. For Alex Shashou, it was more like a playground. So perhaps it’s not surprising that a kid who played in the back of the house — the kitchen, the mail room and the laundry — is leading a technological effort to integrate how hotels manage and deliver services while creating a better experience for hotel guests… Although he grew up in the U.K., his family is from, well, everywhere: His grandfather was Iraqi, while his father was Brazilian, and his maternal grandparents were Russian and Czech. (“I’m Jewish, and we were kicked out of many countries,” he explains.)” [Ozy]

BUSINESS BRIEFS: “Icahn approached Ryan Kavanaugh for studio takeover” [NYPost] • “Jerome Kohlberg Jr., Pioneer of the Private Equity Industry, Dies at 90: “When he joined the Swarthmore board of trustees he described himself as the college’s first Jewish Quaker. In 1976 he founded Kohlberg, Kravis, Robert and Co., partnering with Henry Kravis and George Roberts, two younger cousins who had begun their careers under his mentorship.”” [NYTimes; VineyardGazette] • “Walt Disney Experts Rebut Dogged Anti-Semetic Allegations” [AP]

STARTUP NATION: “Israeli Drone Maker Gets Startup Makeover for Cyber Arms Race” by Gabrielle Coppola: “Defense companies like Elbit are learning they need a bit of startup culture to win a piece of the $35 billion corporate cybersecurity business. Elbit’s new cyber unit, called Cyberbit, is trying to carve out a niche in corporate data security, a market that will surpass $40 billion in revenue by 2018.” [Bloomberg] • “Israel’s Nice Systems sells video surveillance unit for $100 million” [Reuters] • “Would You Leave Israel for Silicon Valley for 20 Million? — Staff of Pebbles offered bonanza but have to move to California after Facebook buys startup.” [Haaretz]

Middle East Profiles: “The daughter of a Jewish dynasty goes to Gaza City” by Charlotte Edwardes: “She’s the daughter of one of the world’s most famous Jewish dynasties. So why is Kate Rothschild risking kidnap in downtown Gaza? Kate Rothschild – heiress and former Goldsmith bride – is leaning over the balcony of our hotel in Gaza City, having a fag. Below, to the thud and jangle of Arabic music, women are swimming fully clothed in the pool, and behind us, across the road, is a Hamas military training camp.” [TheTimes]

“Meet the Pyromaniac Playboy Leading Hezbollah’s Fight in Syria” by Alex Rowell: “The Frank Abagnale Jr. of jihad has found yet another preoccupation in the last few years. According to sources.., the man who also goes by the name Safi Badr is currently leading the Party of God’s military intervention against the Syrian uprising, personally sitting in on meetings between President Bashar al-Assad and Hezbollah Secretary-General Hassan Nasrallah. It’s a distinction that earned the “Specially Designated Global Terrorist” a fresh dose of American sanctions just last week.” [DailyBeast]

TALK OF THE TOWN: “Orthodox Jewish tenants sue Lefrak over electronic key fobs” by Kathianne Boniello: “The road to hell is paved with electronic key fobs. At least that’s according to observant Jews in Lefrak City, who claim a recent renovation project replaced traditional, metal keys with electronic devices that simply aren’t kosher during Sabbath.” [NYPost]

TALK OF OUR NATION: “In Poland, Searching for Jewish Heritage” by Joseph Berger:“When I was growing up, my mother filled me with visions of her hometown, Otwock in Poland, describing it as a kind of Brigadoon without actually using that American word. In an era when anti-Semitic discrimination seemed laced into the national fabric, the Jews of Otwock managed to squeeze much sweetness out of their hardscrabble lives through timeless religious habits and the pleasures of a resort that attracted bourgeois vacationers and Hasidim. My sister and I recently visited the town for the first time.” [NYTimes]

NYTimes Wedding: “Micole Horowitz, Yaron Weizman: Micole Faye Horowitz, a daughter of Marla A. Horowitz and Avri B. Horowitz of Scarsdale, N.Y., was married Thursday to Yaron Ya’akov Weitzman… The groom works in Manhattan as an editorial assistant at Slam, a basketball magazine, and as a freelance sportswriter. The groom’s mother is the executive director of the Frisch School, a Jewish high school in Paramus, N.J., of which Rabbi Ciner is the principal. The groom’s father works in Manhattan as the director of government affairs of the Simon Wiesenthal Center, the Jewish human rights agency based in Los Angeles.” [NYTimes]

DESSERT: “Dead man squawking: How NYC’s kosher chicken king’s luck ran out” by David J. Krajicek: “A century ago, the city’s $28 million-a-year kosher chicken business was based in rambling clusters of stalls in the West Washington Market, near Gansevoort St. in Greenwich Village. Each year, 70,000 tons of live chickens were trucked in crates to the wholesale market from New Jersey rail yards. Nearly all of the birds landed in pots on the East Side, feeding the ample Jewish population there. A grift known as overcropping had become endemic in the trade. Just before birds were sold, wholesalers would feed hungry chickens a final meal of bran cut heavily with sand, grit and gravel, adding as much as 25% to their weight.” [DailyNews] 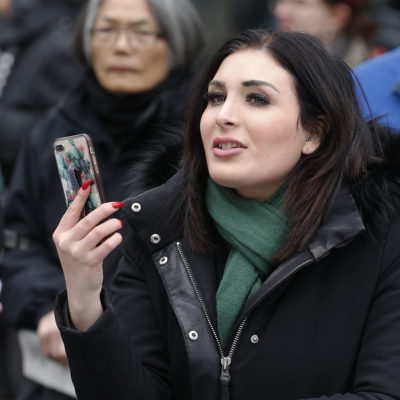