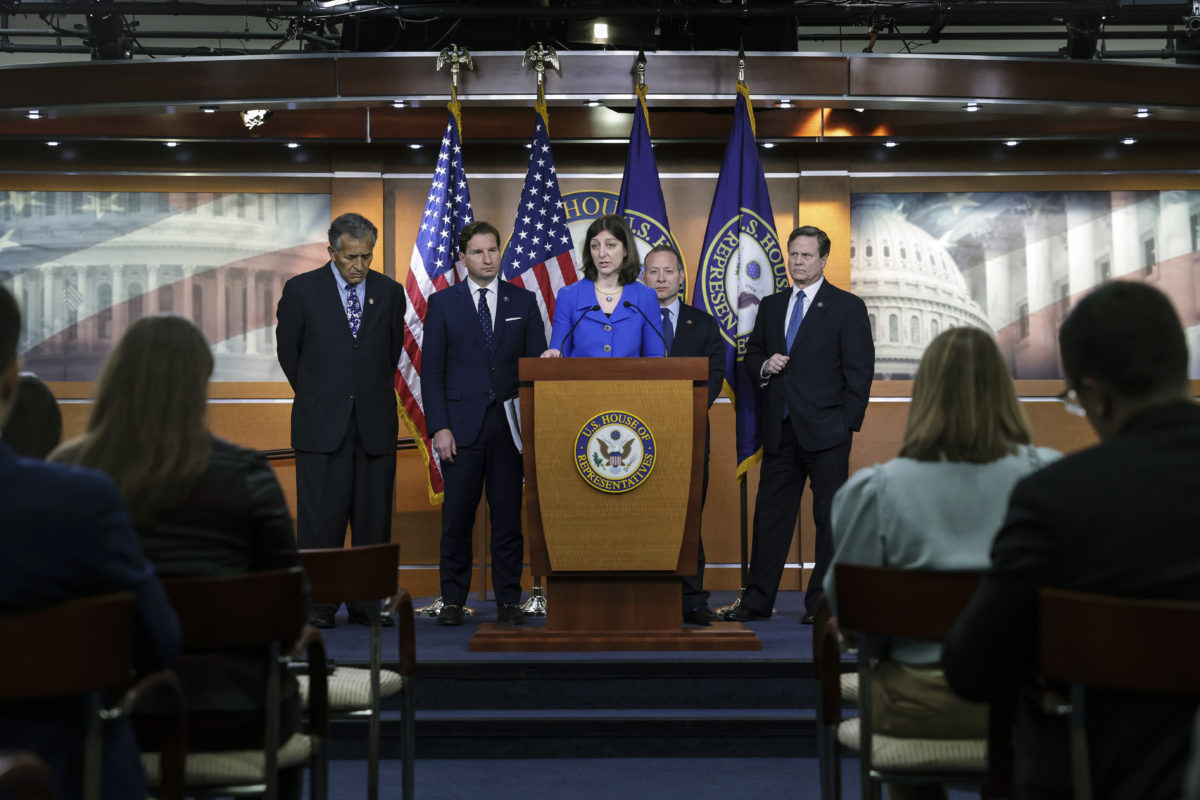 Eighteen House Democrats came together in a joint statement and press conference on Wednesday to voice concerns about the ongoing talks with Iran over its nuclear program, but left unclear whether they would all vote against a deal if or when it comes before Congress.

Two members of the group — Reps. Brendan Boyle (D-PA) and Val Demings (D-FL) — had not previously expressed criticisms of the anticipated deal. Reps. Kathleen Rice (D-NY) and Ritchie Torres (D-NY) have separately expressed concerns to JI, bringing the total number of House Democrats who have publicly raised concerns about the talks to 20.

“As a 27-year law enforcement officer and chief of police, I know a habitual offender when I see one. Iran’s corrupt leaders are habitual offenders, sponsors of terror and a threat to U.S. national security, Israel and stability around the world,” Demings, who is running for Senate in Florida, said in a written statement. “I continue to support all efforts to destroy the Iranian government’s terror networks, break up their ballistic missile program, disrupt their meddling in Latin America and gut their nuclear program.”

It’s unclear, however, whether all 20 would vote against a deal. The five members who attended the press conference — Gottheimer, Luria, Norcross, Vargas and Phillips — emphasized that the group of 18 is not all in agreement.

“As a group we have a variety of concerns, everywhere from concern about the negotiations all the way to on the spectrum of outright opposition to reentering the deal,”  Luria  said. “We understand that while the recent negotiations have not concluded, we feel that we can’t stay quiet about the unacceptable and deeply troubling turn that these talks have reportedly taken.”

“This isn’t a whip operation. This is not a group trying to generate opposition to the deal by any stretch of the imagination,” Phillips added.

Some other members who opposed the deal in 2015 are staying mum for now.

News reports indicate that the final major sticking point in the ongoing talks in Vienna is that Iran is insisting that the U.S., as part of a new agreement, withdraw the Islamic Revolutionary Guard Corps’ designation as a Foreign Terrorist Organization.

“The IRGC is a terrorist organization with blood on its hands from every corner of the world. I think their record speaks for itself,” Deutch said.

Rep. Ted Lieu (D-CA), who voted against the deal in 2015, declined to comment on the talks, citing a lack of knowledge of what the draft deal entails, and referred JI to his 23-page analysis of the original deal published in 2015.

The five members who attended the Wednesday press conference called for a “longer and stronger” deal than the original 2015 agreement — saying they do not oppose diplomacy with Iran outright, expressed concerns about potentially delisting the IRGC and protested Russia’s involvement as a mediator in the negotiations.

“I believe deeply in diplomacy,” Phillips said. “But diplomacy has to be built on a foundation of potential force. And that’s what this is all about. Iran must know the consequences of their inaction, of their inability or unwillingness to abide by any potential agreement.”

Concerns about the deal’s limited duration and the IRGC designation were echoed in written statements issued by the members who did not attend the press conference.

Pressed on what the lawmakers saw as the path to the better deal they said they support, Norcross argued that the Biden administration should hold out for more concessions from Iran, but did not offer a backup plan in the event that negotiations fail entirely.

“You don’t give in early… We increase and keep the sanctions that are on there because they’re at the table for obvious reasons. The sanctions are having an effect,” he said. “Is it having enough effect to actually impact the negotiations? Well, we’ll see what they come out with.”

Even if the deal’s opponents pick up a majority in the House, they likely will not have the 60 votes in the Senate necessary to block its implementation, much less the two-thirds majority needed in both chambers to override a presidential veto of congressional action blocking a deal.

But Democrats who attended the news conference were also split over whether they expected the administration to provide Congress a chance to review and potentially try to block the deal under the Iran Nuclear Agreement Review Act (INARA).

Gottheimer said his “understanding is there’s been that commitment… we’ve heard there’s an agreement to have that vote.” Luria said she had heard “mixed messages.”

The State Department declined to provide any firm commitment in response to a recent JI inquiry, saying that it would “carefully consider the facts and circumstances” and is “committed to ensuring the requirements of INARA are satisfied.”

Norcross acknowledged that the administration can enter a deal without congressional approval, but said lawmakers are strongly committed to oversight of the deal.

Around 15 House Republicans on the House Foreign Affairs Committee held their own press conference on Wednesday opposing the deal and calling for continued “maximum pressure” sanctions. The Republicans dodged questions about whether they’ve coordinated with the House Democrats criticizing the negotiations or whether they think they could rally the two-thirds majority needed to block the deal.

Foreign Affairs Ranking Member Michael McCaul (R-TX) went on to speculate that the IRGC FTO designation could be a “poison pill” that causes a significant number of Democrats to oppose a new agreement.

McCaul said Republicans are drafting a measure to bring to the House floor legislation that seeks to guarantee congressional review of a new deal, and predicted that “a lot of Democrats… are with us” on that issue. He said Republicans would also seek to force a floor vote on a resolution disapproving of a new deal and pledged that they would pass such legislation if they take the House in the midterms later this year.

In contrast with the Democrats, who largely called for sanctions to be used to facilitate a stronger deal, the Republicans framed maximum-pressure sanctions as their end goal, with the intent of containing Iran’s nuclear program.

Rep. Joe Wilson (R-SC), the ranking member of the Middle East subcommittee, added, “I sincerely hope the young people of Iran can make an influence with a new government.”

Wilson said he was “concerned” that maximum pressure has not previously been fully applied, explaining, “We should have identified whoever they were trading with, and put pressure not just on the dictatorial regime in Tehran, but on any country that would be actually trading with them — there should be a ripple effect. And companies and businesses.”

Asked whether this meant he believed the Trump administration had fallen short in its enforcement of maximum pressure, Wilson responded that “all allied governments have not done all they can do.”