From Southern California to Staten Island, we take a look at the competitive races to watch as results trickle in 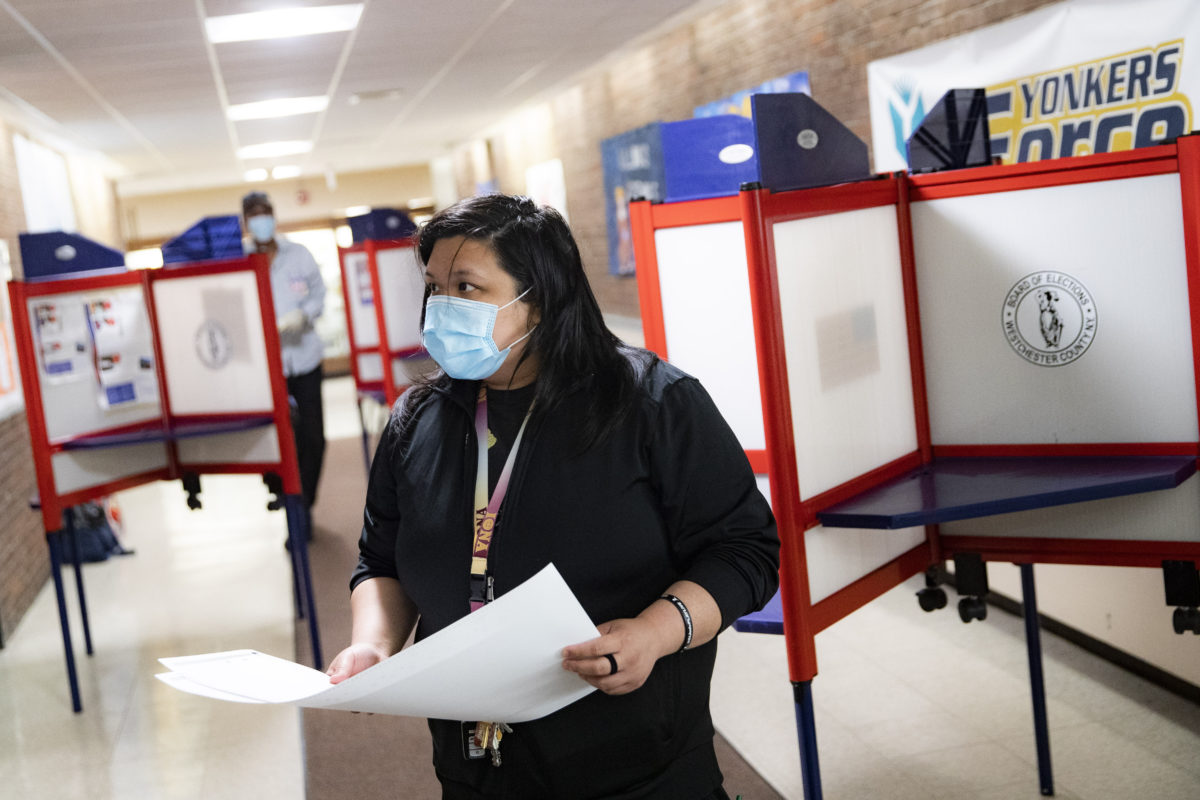 A voter wears a protective mask while casting their vote in New York's primary election at a polling site in Yonkers on June 23, 2020.

Around the country today, Americans will cast their votes in federal, state and local elections — if they haven’t already. With millions of mail-in ballots to count, many Senate and House races could take time to be officially called, especially those predicted to come down to very narrow margins. Here are some of the key races Jewish Insider has covered closely this year and will be watching today:

Southern California: Will it be too close to call in SoCal? With Rep. Duncan Hunter’s (R-CA) resignation and Rep. Susan Davis (D-CA) announcing her retirement, the 50th and 53rd congressional districts fielded wide primary fields. In the 50th, former Rep. Darrell Issa (R-CA) holds a narrow lead over Democrat Ammar Campa-Najjar, who lost by 3.5 percentage points to Hunter in 2018. Issa and Campa-Najjar — who has both Palestinian and Mexican heritage and whose grandfather was allegedly involved in the attack on Israeli athletes at the Munich Olympics — have sparred over their respective positions on Middle East geopolitics. In the neighboring 53rd district, San Diego City Council President Georgette Gomez and Sara Jacobs, both Democrats, came out on top in California’s jungle primary this spring. The two have tussled over their progressive bona fides, with Gomez earning the endorsement of Justice Democrats, but losing support after going public with her pro-Israel policy positions. Jacobs is the granddaughter of Qualcomm founder Irwin Jacobs, and has largely self-funded her campaign.

Nebraska 2nd: Will Kara Eastman bring home the Bacon this year? That’s the question on the minds of voters in Nebraska’s 2nd congressional district, where Eastman is challenging Rep. Don Bacon (R-NE) for the second time, after losing to the former Air Force brigadier general in 2018 by two percentage points. Eastman has been endorsed by a number of heavy-hitters across the Democratic spectrum, including former President Barack Obama, former Vice President Joe Biden, Sens. Bernie Sanders (I-VT) and Elizabeth Warren (D-MA) and Reps. Jan Schakowsky (D-IL) and Jamie Raskin (D-MD).

New Jersey 2nd: New Jersey’s 2nd congressional district is the race to watch in the Garden State, where most seats are predicted to go to Democrats. But in the district that encompasses the entire southern portion of the state — where former Democratic Rep. Jeff Van Drew (R-NJ), switched parties earlier this year and pledged his support for President Donald Trump — Van Drew is locked in a tight race against Amy Kennedy, wife of former Rep. Patrick Kennedy (D-RI). If she wins, Kennedy will be the only member of the political dynasty in Washington following Rep. Joe Kennedy’s (D-MA) failed Senate bid in Massachusetts.

New York 1st: One thing is for certain: The next representative from New York’s 1st congressional district will be Jewish. Three-term Rep. Lee Zeldin — one of two Jewish Republicans in the House — is being challenged by college chemistry professor Nancy Goroff, who beat her primary opponent by less than 700 voters. Recent polling gives lifelong Long Islander Zeldin a slight edge in the district, which includes the entire eastern portion of the island. Zeldin has a narrow fundraising lead and had more cash on hand to spend during the final weeks of the race, which may push him over the finish line Tuesday night.

New York 11th: First-term Rep. Max Rose (D-NY) is neck and neck with Nicole Malliotakis in New York City’s only purple district. Rose has risen to prominence as one of the few Purple Heart recipients on Capitol Hill, and spent two weeks earlier this year deployed with the National Guard at the beginning of the COVID-19 pandemic. Malliotakis, who has served in New York’s State Assembly since 2011, was the Republican nominee in the 2017 New York City mayoral election, and lost to Bill de Blasio by almost 40 points. Rose has gone to great lengths to distance himself from the mayor, going so far as to release a six-second ad in which he proclaims, “Bill de Blasio is the worst mayor in the history of New York City.”

Texas 10th: In his 15 years representing Texas’s 10th congressional district, Rep. Mike McCaul (R-TX) has worked his way up the ladder to become the ranking member of the House Foreign Affairs Committee. He’s being challenged by Mike Siegel, a progressive Democrat who lost the 2018 race to McCaul by five percentage points. Siegel is hoping a second blue wave will push him to victory, as other Democrats in the red state, including Candace Valenzuela and Gina Ortiz Jones, are seeing their districts lean towards Democrats. The race is now rated a tossup by the Cook Political Report. If McCaul falls short, the House Foreign Affairs Committee will lose both its ranking member and chairman following Rep. Eliot Engel’s primary defeat over the summer.

Alaska Senate: In Alaska, Sen. Dan Sullivan (R-AK) holds a slight lead over Al Gross, the former orthopedic surgeon and commercial fisherman who entered the race as an independent but has received significant backing from Democrats in the lower 48 hoping to wrestle control of the Senate. Sullivan has remained a fairly popular official in the state, earning the endorsement of the Anchorage Daily News last week, but Gross is hoping the independent-minded nature of Alaska voters — who sent Sen. Lisa Murkowski (R-AK) back to the Senate in a write-in campaign after she lost her 2010 primary — will propel him to victory. A Sullivan campaign ad over the weekend, which featured Gross holding a wad of cash and surrounded by $100 bills as well as a shadowy image of Sen. Chuck Schumer (D-NY) looming in the background, generated controversy and condemnation.

North Carolina 11th: When Mark Meadows took a position as chief of staff to the president, his seat — reliably Republican — opened up, but the party favorite (and Meadows’s personal choice) fell short in the primary, losing to Madison Cawthorn, the then-24-year-old upstart who has said he wants to be the Republican Party’s version of Rep. Alexandria Ocasio-Cortez (D-NY) and usher in a new generation of young GOP leaders. Cawthorn, who has made waves with controversial social media posts and questions about his academic and professional careers, has picked up support from the president — even appearing at the RNC in August — and is still favored to win over Moe Davis, an attorney and retired Air Force general. While Davis is the clear underdog, he may benefit from newly redrawn district lines, which brought the liberal enclave of Asheville into the district. Cawthorn’s controversies have not been without consequence — once reliably red, the district has moved from “Likely Republican” to “Lean Republican” in the months since Cawthorn became his party’s nominee.

Arizona Senate: Former astronaut Mark Kelly, husband of former Rep. Gabrielle Giffords (D-AZ), has held a steady lead over incumbent Sen. Martha McSally (R-AZ) over months of polling in Arizona’s special Senate election. The two are battling over who will represent the state in the final two years of the term Sen. John McCain (R-AZ) was elected to in 2016, a year and a half before his 2018 death from glioblastoma. McSally has struggled to gain momentum in a historically red state that is beginning to trend blue, and has not benefited from the same support seen for other GOP senators hoping to keep their seats. In an appearance at a Trump rally in Arizona last week, McSally was quickly ushered on stage and given a minute to speak — less stage time than several out-of-state Republican legislators in town for the event.

South Carolina Senate: Sen. Lindsey Graham (R-SC) was still a political neophyte when he flipped a historically blue congressional district in 1994 before heading to the Senate a decade later. Now, Graham is fighting to keep his seat representing the historically red state amid a serious challenge from Jaime Harrison, a lobbyist and Democratic operative who has never held elected office but has given the longtime senator his first competitive Senate race.

Georgia: In line with presidential polling in recent weeks, both Senate elections — the regular election between Sen. David Perdue (R-GA) and Jon Ossoff, and the crowded special election to replace Sen. Johnny Isakson (R-GA) — are expected to be close, with the special election race almost certain to head to a run-off in January. That race will see Pastor Raphael Warnock, businessman Matt Lieberman, Rep. Doug Collins (R-GA) and Sen. Kelly Loeffler (R-GA), who was chosen to replace Isakson earlier this year, battle for the chance to finish out Isakson’s term. Most congressional races in the state are likely to be called early, with Carolyn Bourdeaux leading Rich McCormick in the race for the Georgia 7th open seat and QAnon conspiracy theorist Marjorie Taylor Greene running unopposed after her Democratic opponent dropped out of the race.

Michigan Senate: In the battleground state of Michigan, Republican candidate John James, an African-American Iraq War veteran, is challenging incumbent Sen. Gary Peters (D-MI) in a closely watched race that has drawn the attention of national GOP leaders. Last week, James benefited from a $4.6 million cash infusion from the Senate Leadership Fund — a super PAC affiliated with Senate Majority Leader Mitch McConnell — as Republicans make their final push to scuttle Democrats’ hopes of flipping the Senate this cycle. The 39-year-old Detroit native is a formidable candidate and has managed to give Democrats a scare as polls have occasionally shown a competitive contest. But Peters has maintained a consistent lead heading into Election Day and appears to be in a strong position to defend his seat. In 2018, James ran against Sen. Debbie Stabenow (D-MI), losing by a margin of 6.5 percentage points.