Shapiro in the spotlight 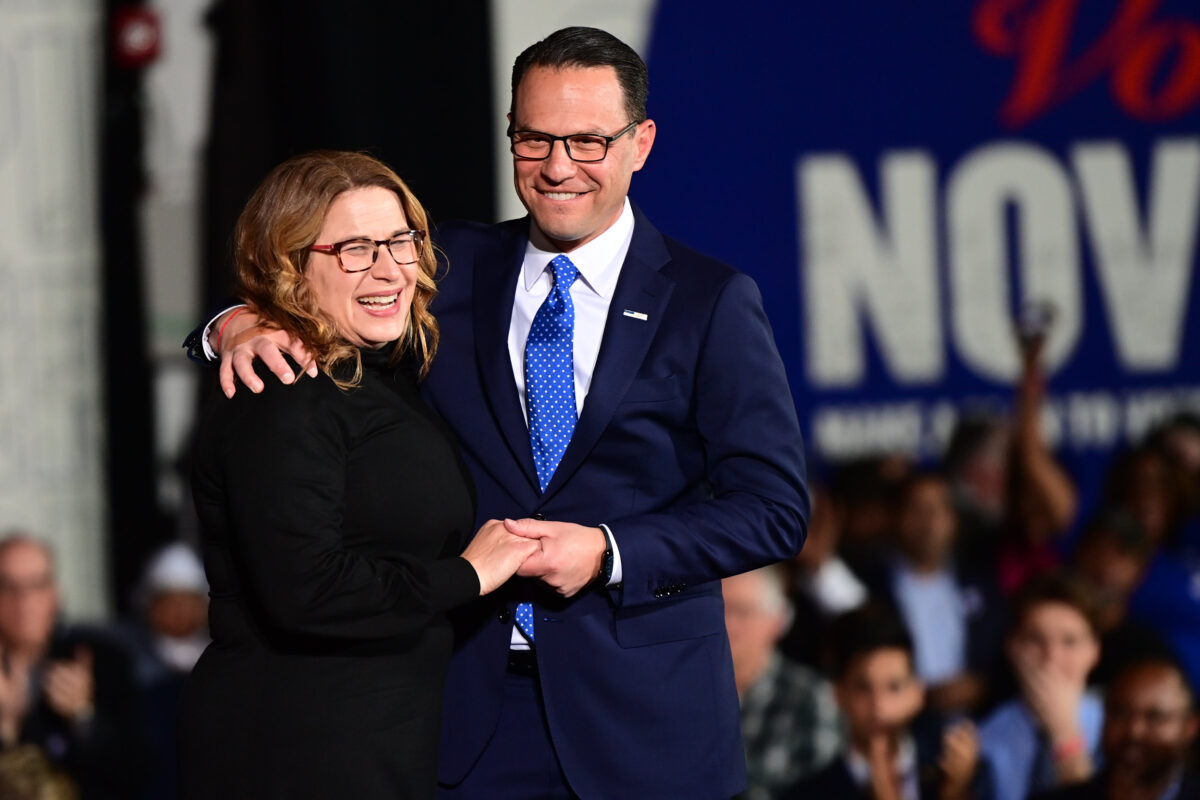 OAKS, Pa. — As anxious Democrats around the country waited for election results to come in on Tuesday night, a jubilant crowd of more than a thousand was in a celebratory mood from the moment they walked into Josh Shapiro’s election night party at a convention center on the far edges of the Philadelphia exurbs.

While vulnerable Democrats elsewhere in the state struggled in close races that remain undecided, Shapiro was declared the victor by the Associated Press shortly after midnight, leading Doug Mastriano by more than 500,000 votes.

“I spoke a lot about my faith in this campaign. My family and my faith call me to service and they drive me home,” Shapiro told a cheering crowd in a triumphant victory address. “You’ve heard me read Scripture before, that no one is required to complete the task, but neither are we free to refrain from it, meaning each of us has a responsibility to get off the sidelines, to get in the game and to do our part. And so I say to you tonight, that while we won this race — and by the way, won it pretty convincingly … the job is not done. The task is not complete.”

Guests mingled throughout the night alongside a hearty spread of food, including charcuterie, cheese, fruit and vegetables, and a table containing heaps of leftover Halloween candy. Supporters of the governor-elect partied to a bass-pumping blend of early 2010s pop and classic rock. A coach bus decked out in Shapiro branding, a relic of a campaign bus tour across the state, sat at one end of the hall. People wrote messages to Shapiro and signed their names in Sharpie. A massive screen showed results coming in from around the nation on CNN, and guests burst into applause when the network called the race for Shapiro.

In conversations with Jewish Insider, Jewish Democrats at the party noted Shapiro’s strength as a candidate — and the weaknesses of his opponent, a far-right state legislator who has advanced conspiracy theories about the 2020 election.

“I think that Shapiro is going to win resoundingly, because I still believe in the better angels of humanity, and I think Mastriano panders to the lowest and the worst,” Rabbi Greg Marx, senior rabbi at the reform Congregation Beth Or in Glen Maple, told JI early in the night.

Shapiro came out to address the still-packed crowd at 11:30 p.m.

“Real freedom prevailed here tonight in the Commonwealth of Pennsylvania. I stand before you tonight, thanks to all of you, in the birthplace of our democracy, in the cradle of liberty, and look you in the eye and say because of you, our democracy endures,” said Shapiro, who ran a campaign that focused on a broad range of economic and social issues, as well as protecting Pennsylvania’s elections. “We value our freedom. We cherish our democracy. And we love this country.”

His remarks did not mention John Fetterman, the Democratic Senate candidate who was holding his own party in Pittsburgh and whose victory over Dr. Mehmet Oz would be called by AP several hours later, albeit by a slimmer margin.

Over the course of the campaign, Oz had hammered Fetterman for his approach to criminal justice, calling Fetterman soft on crime and arguing that he will make the state less safe. State Rep. Jared Solomon, a Democrat who represents northeast Philadelphia, noted that Shapiro largely avoided falling into the same trap as Fetterman and other national Democratic figures by leaning on his experience as attorney general.

“He is an AG, so he has those credentials, law and order, but also he’s talking about the issue while he’s running for governor, so he’s not shying away from it,” Solomon explained. “I think a lot of times Democrats tend to not want to address the issue at all.”

As governor, Shapiro will have to work with a Republican-controlled state legislature, where Mastriano will remain a state senator. But Shapiro’s supporters point out that he won endorsements from several Pennsylvania Republicans.

“I think it’s widely accepted, on both sides of the aisle, that Josh will be an effective governor,” said Brett Goldman, a co-founder of Democratic Jewish Outreach Pennsylvania and a lobbyist for the cannabis industry. “He’s built a lot of relationships with Republican legislators, and they respect him as a colleague.”

Solomon added that Shapiro prioritized outreach to people who are not straight-ticket Democratic voters. “Democrats are up against some really strong headwinds,” said Solomon, who added that reaching across the aisle is part of Shapiro’s “brand.”

Earlier Tuesday, Shapiro cast his ballot with his family at their neighborhood polling place in Abington, in Philadelphia’s Main Line suburbs.

“I’m incredibly humbled to be receiving the kind of support we’re receiving from Republicans, Democrats, independents, and it’s a coalition that will, God-willing, not only help us win today, but help us govern in the future to bring people together,” Shapiro told reporters on Tuesday morning.

His election night party was on his home turf in Montgomery County, where he nurtured his own political career, starting in the statehouse. Scores of supporters, benefactors and mentors from Shapiro’s nearly two-decade political career in the county and the state were on hand to claim some degree of credit for Shapiro’s rise — and to speculate about his future.

“People on the national stage are going to really learn who Josh Shapiro is,” said Noah Marlier, a Montgomery County elected official.

Marcel Groen, a former chairman of the Pennsylvania Democratic Party whom a friend described as a mentor to Shapiro, said, “I think I have a pretty good idea of where he’s headed.” When asked whether he thinks Shapiro wants to run for higher office, Groen responded: “He doesn’t, but I do [want him to].”