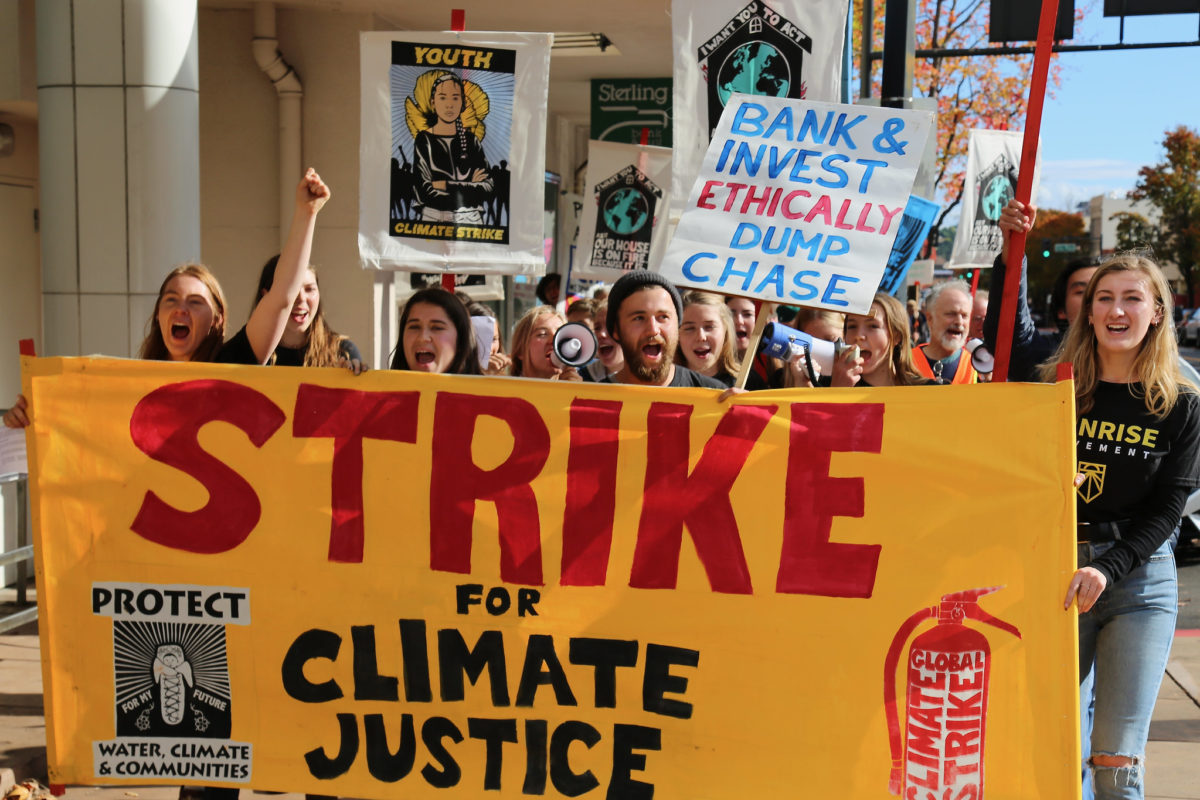 Sunrise Movement activists participate in a protest in Northern California on Dec. 6th, 2019.

For progressive advocacy groups, this was supposed to be a make-or-break week on voting rights. After the Senate failed to advance the Freedom to Vote Act on Wednesday, a group of runners, walkers and bikers are set to depart West Virginia today on the Freedom to Vote Relay, culminating in a large Capitol Hill rally in support of voting rights when participants arrive in Washington, D.C, on Saturday.

Instead, the event has become steeped in controversy after the Washington chapter of the Sunrise Movement — an influential progressive environmental advocacy group — released a statement on Tuesday announcing it would not participate in the event “due to the participation of a number of Zionist organizations.” The statement also announced that the movement would no longer join coalitions with Zionist organizations, naming the Religious Action Center of Reform Judaism (RAC), the National Council of Jewish Women (NCJW) and the Jewish Council on Public Affairs (JCPA).

The group rooted its reasoning in its support for Washington, D.C., statehood. “We will continue to fight for statehood for DC in the United States and for the liberation of Palestine,” the chapter’s statement said. “Given our commitment to racial justice, self-governance, and indigenous sovereignty, we oppose Zionism and any state that enforces its ideology.”

Sunrise Movement DC has stood by its statement in the face of criticism from Jewish activists and organizations that the sentiment is antisemitic. Yesterday, the group’s Twitter account retweeted a local activist who wrote, “anti zionism =/= [does not equal] anti semitism. hope that clears things up #FreePalestine.”

“This idea that you are told that you have to reject your support for Israel to participate in American public life on issues that you care about, that is what’s antisemitic and anti-democratic,” said Joel Rubin, the executive director of American Jewish Congress who previously served as Bernie Sanders’s Jewish liaison during his 2020 presidential run. “This is a rally to support democratic rights, and one organization is trying to get other organizations banned from using their democratic rights.”

None of the Jewish organizations named by Sunrise Movement DC have a core mission focused on Israel.

“If you look at NCJW, for example, nowhere on their website does it say that they’re a Zionist organization,” said Hadar Susskind, president and CEO of Americans for Peace Now, an organization that advocates for a two-state solution. “This is not boycotting the ZOA [Zionist Organization of America] or AIPAC or even [Americans for Peace Now]. This is boycotting groups because they are Jewish and state a general … support of Israel, which is the position of 90% of the American Jewish community.” (A recent Pew Research poll found that 80% of American Jews view caring about Israel as crucial to their Jewish identity.)

Susskind said such a view “crosses any line.”

“To say that any group that is in any way supportive of Israel should be excluded from our civic life is unacceptable,” said Susskind.

The national staff of the Sunrise Movement did not respond to multiple requests for comment to clarify whether they support the Washington chapter’s position. Jewish Insider also did not receive a response to multiple messages sent to the Declaration for American Democracy Coalition, the umbrella arm for the more than 230 organizations supporting the relay.

The Sunrise Movement has significant clout in progressive spaces and a major grassroots following. It endorses very few candidates, explaining on its website that the organization “support[s] candidates who, if elected, would represent a significant break with the status quo for their district.”

A handful of members — including Reps. Jerry Nadler (D-NY) and Grace Meng (D-NY) — condemned the statement. “Refusing to participate in civic life with Jewish groups — especially those groups who are committed to social justice here in the US, in Israel and around the world — is misguided, unproductive, offensive and wrong,” Nadler tweeted.

In separate statements to Jewish Insider, senior leaders at the RAC, NCJW and JCPA expressed commitments to dialogue and coalition-building but did not criticize the Sunrise Movement by name nor call the group’s stance antisemitic. When asked specifically what they thought about the Sunrise Movement statement and its language about Zionism, all three declined to elaborate.

“It’s unfortunate that any organization would refuse to join together to protect voting rights,” said Rabbi Jonah Pesner, director of the RAC. “As an organization committed to social justice and our progressive Zionist values, we will continue to work toward the passage of comprehensive voting rights legislation.”

“We fight for access to the ballot, an end to gender-based violence, increased equity, and for women to build power despite systemic barriers at every turn. All of this work is done in coalition,” NCJW CEO Sheila Katz told JI. “Our commitment to working across lines of difference includes our willingness to engage in dialogue with groups that take issue with our policies.”

Melanie Gorelick, senior vice president at JCPA, said the organization “will continue our ongoing engagement on voting rights efforts in coalition with interfaith and diverse communities, including our involvement in the Freedom to Vote rally.”

Kevin Rachlin, J Street’s vice president of public affairs, expressed his support for “the critical work of the Sunrise Movement in combating the urgent dangers of climate change.”

But, Rachlin told JI, “we find the statement by the local Sunrise DC Chapter to be saddening, harmful and wrong,” he said. “Seeking to bar liberal pro-Israel and Zionist groups and individuals from progressive coalitions and spaces disrespects and alienates a large portion of the American Jewish community — and does nothing to actually help the Palestinian people, combat occupation or promote peace. Progressive advocates for Palestinian rights and other important causes should seek to engage and share views with liberal Jewish institutions — not treat them with dismissive contempt.”

Update at 12:29 p.m. ET on 10/21/21: After the article was published, Rep. Mondaire Jones (D-NY) condemned Sunrise Movement DC’s “call for the exclusion of these Jewish organizations” in a statement to JI. “With our democracy in crisis, we need everyone to stand up for the right to vote, free and fair elections, and the transformative legislation this moment demands,” he said. “We must focus on building a broad coalition to support our democracy, not excluding groups for unfair and arbitrary reasons. I condemn the call for the exclusion of these Jewish organizations from this event.”