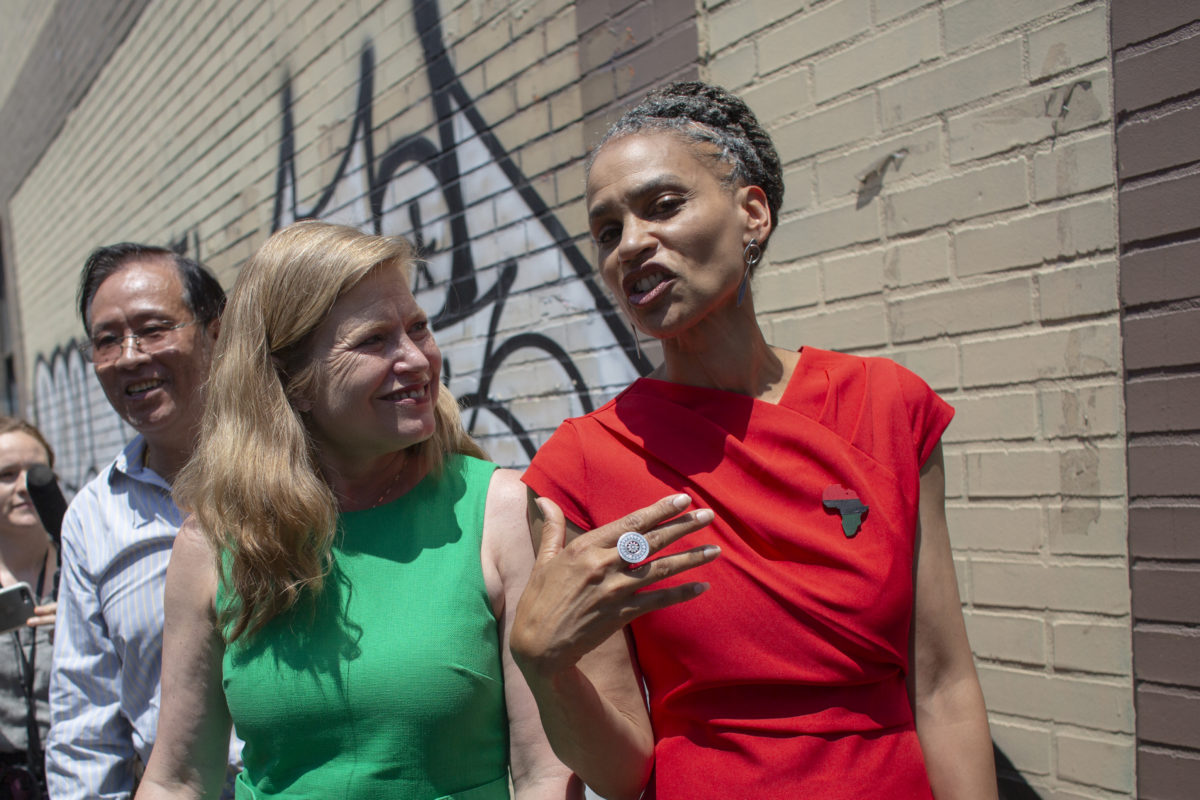 New York City mayoral candidates Kathryn Garcia and Maya Wiley speak at the unveiling of a mural in Chinatown on June 20, 2021 in New York City. Garcia and Andrew Yang are campaigning together in the lead-up to primary Election Day on June 22.

New Yorkers who didn’t cast their ballots during the week of early voting will head to the polls today to choose the likely next resident of Gracie Mansion. Eight Democrats and two Republicans are battling for a spot on the November ballot, with the winners facing an unevenly matched general election in the solidly blue city — the winner of the Democratic primary is all but assured victory in November.

Mayoral Matchup: Brooklyn Borough President Eric Adams, entrepreneur Andrew Yang and former sanitation commissioner Kathryn Garcia are all seen as top contenders to succeed de Blasio. Maya Wiley, who previously served as counsel to the de Blasio administration, shored up support among progressive voters and legislators amid the collapsing campaigns of fellow progressives Scott Stringer and Dianne Morales. Wall Street executive Ray McGuire and former Obama administration HUD Secretary Shaun Donovan failed to gain significant traction in the crowded race, though McGuire picked up endorsements from celebrities, as well as Rep. Gregory Meeks (D-NY). Wiley, who was polling near the top of the pack in some of the last surveys before Primary Day, earned endorsements from progressive heavy hitters such as Sen. Elizabeth Warren (D-MA) and Rep. Alexandria Ocasio-Cortez (D-NY). The last days of campaigning saw Yang and Garcia teaming up for joint events that stopped short of cross-endorsements, but it remains to be seen if their pairing is enough to stop Adams, who has consistently polled near or at the top of the list. Yang and Adams have battled for support from the city’s Orthodox Jewish community, while Garcia made a pit stop at the Masbia soup kitchen in Borough Park on Monday.

Prosecutor push: There are nine candidates vying to succeed Cy Vance, Jr. as Manhattan district attorney, but two — former federal prosecutors Tali Farhadian Weinstein and Alvin Bragg — have run away from the pack, with recent polls showing a neck-and-neck race. Either candidate would make history: Bragg as the first Black district attorney, and Farhadian Weinstein as the first woman to hold the role. Farhadian Weinstein, who was born in Iran and fled the country with her family at the age of 4, has been dogged by controversy over tax payments, and has come under criticism for putting more than $8 million of her own money into her campaign earlier this month. Trailing in the race are Eliza Orlins, Dan Quart, Liz Crotty, Tahanie Aboushi, Diana Florence and Lucy Lang.

Borough beat: Four of the five borough presidents currently in office will be termed out at the end of this year. In Manhattan, nine candidates are in the race to succeed Gale Brewer, including Councilmember Mark Levine (who earlier this month called for a sizable increase in funding to the Office for the Prevention of Hate Crimes), Councilmember Ben Kallos, State Sen. Brad Hoylman and former congressional candidate Lindsey Boylan. In Brooklyn, a dozen Democrats, including Councilmembers Robert Cornegy and Antonio Reynoso and Assemblymember Jo Anne Simon, are hoping to succeed Adams.

Will progressives pack a punch? That’s the question today following months of grassroots organizing and campaigning on the part of progressive and far-left activists. With most of the City Council members vacating their seats due to newly imposed term limits, the Democratic Socialists of America and other groups are throwing their support behind a number of open-seat candidates backing issues like the defunding of police departments, the Boycott, Divestment and Sanctions movement against Israel and renters’ rights. The DSA came under significant criticism earlier this year for a candidate survey that asked individuals seeking the group’s endorsement to agree not to travel to Israel. Tuesday’s elections will be an indicator of the DSA’s popularity in the city.

Ranked-choice rollout: Ranked-choice voting, a process by which voters rank their top five candidates and the lowest-performing candidates are eliminated one by one until someone reaches the 50% threshold, was introduced city-wide — with the exception of the Democratic primary for Manhattan district attorney — after being used in a special election in Queens earlier this year. Beginning after polls close tonight, the Board of Elections will run weekly rounds of ranked-choice analyses until a candidate in each race reaches 50%.