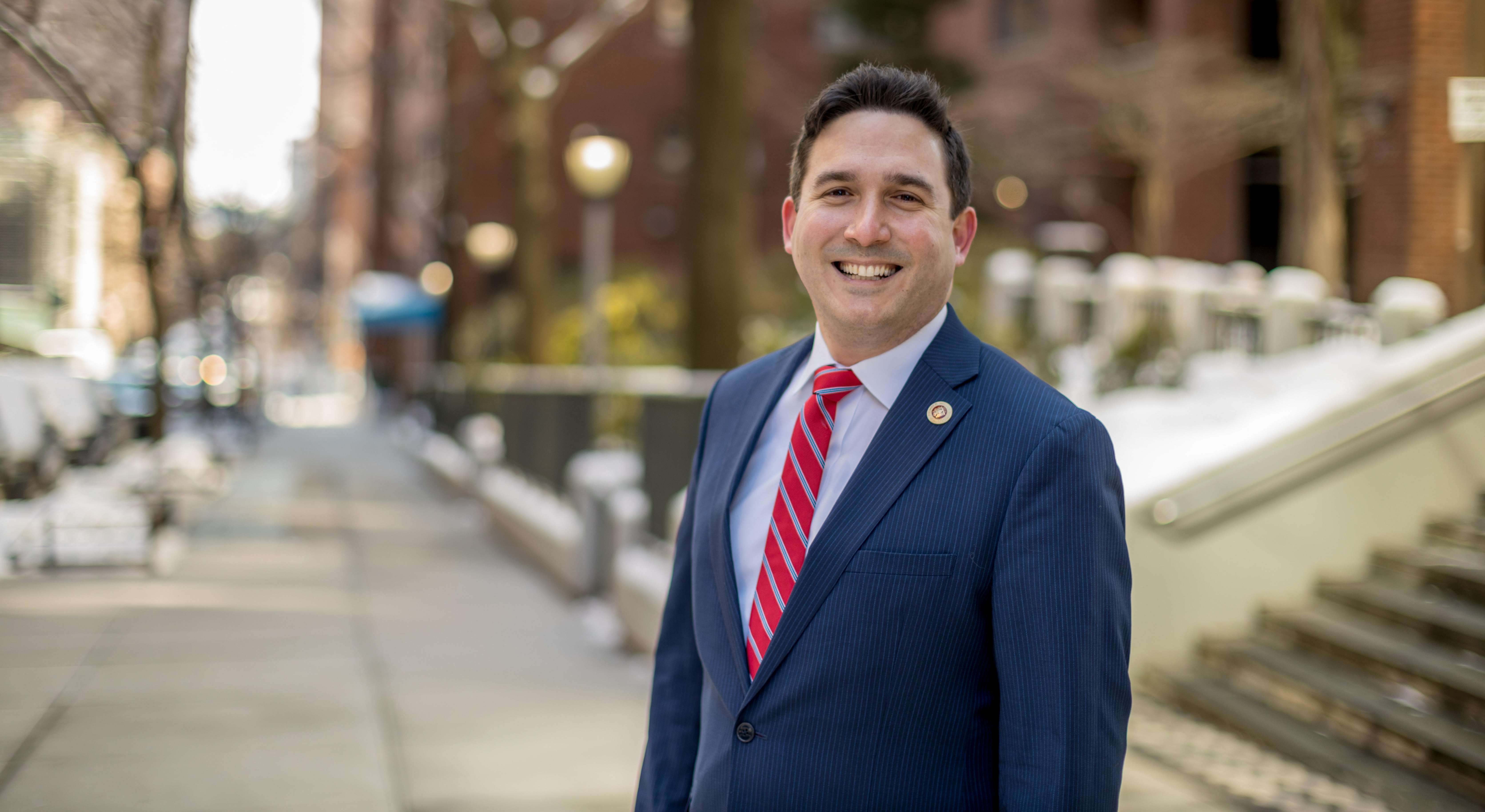 The New York City councilman, who once considered becoming a rabbi, is now running for Manhattan borough president

When Ben Kallos graduated from college, he found himself weighing two opposing career goals: lawyer or rabbi. As a former yeshiva student immersed in Talmud, he had always connected deeply with Judaism. But Kallos had long harbored a desire to pursue law, an ambition he remembers expressing to a teacher at his Jewish day school as a 12-year-old.

“I felt a calling for both,” Kallos recalled in a recent interview with Jewish Insider. “What one person said to me is, ‘First you sin, and then repent.’” He chose the law, but then, perhaps fittingly, given the advice once offered to him, opted for politics.

His first bid for public office, in 2013, earned him a seat on the New York City Council, where he represents the Upper East Side and East Harlem, among other neighborhoods. Now, the 40-year-old Democrat is hoping he can put off repenting for a while longer as he runs for the more high-profile role of Manhattan borough president. “I feel constrained by the boundaries of my district,” he said, “and this is a real opportunity to do more for the entire borough.”

But even as he seeks higher office, Kallos emphasized that his actions are still informed by a higher calling, in spite of his decision not to pursue the rabbinate. “I know that I have Hashem on my side doing the right thing,” said Kallos, a self-proclaimed “Conservadox” Jew who is a member of both Park East Synagogue and Congregation Or Zarua on the Upper East Side.

Rabbi Scott Bolton, who leads Or Zarua, seconded that assessment, describing Kallos as “a Jewishly soulful person” who “sees the big picture and cares about every detail.” The councilman, he added, “senses that his job is for Manhattan and New York City, but he thinks about that in terms of really serving every soul.”

“As the next borough president, I would meet every single person in Manhattan,” claimed Kallos, who lives with his wife and daughter on the Upper East Side. “One person at a time.”

With no available public polling, it is difficult to assess whether Kallos has an edge in the crowded race to succeed Gale Brewer, who is running for her old seat on the City Council as she prepares to retire at the end of her term. The primary field includes a number of formidable candidates, such as New York City Councilman Mark Levine, state Sen. Brad Hoylman and Lindsey Boylan, a former congressional candidate and ex-aide who recently accused Gov. Andrew Cuomo of sexual harassment.

But Kallos believes he will rise to the top thanks to his record serving constituents. He recently helped open a new supermarket-style food pantry on the Upper East Side, he noted, an initiative that originated from a personal resolution to address the homelessness crisis he made to himself on Yom Kippur when he first took office. “Most people think that Yom Kippur is the worst day of the year because it’s a fast day,” he said. “But for me, I see it as an opportunity.”

“We’ve built new schools in my district, but schools are overcrowded everywhere, and I need to build more schools for our kids,” Kallos said. “We’ve invested almost a billion dollars rebuilding parks in my district and East Harlem, but we need parks equity throughout the borough of Manhattan. I put a new trash can on every corner in my district to really clean things up, but this borough has gotten filthy. And so in my seventh year on the council, people in my district are no longer complaining about things in the district. Now, they’re concerned about conditions all over the borough and all over the city and how we’re going to recover. In order to lead that recovery, I need to be borough president.”

Though the position is largely ceremonial, it can be a powerful perch depending on the occupant. “The job is what you make of it because its powers are limited and they’re largely advisory,” said Robert W. Snyder, the Manhattan borough historian. “But what a borough president chooses to do with those advisory powers can matter, and it can be a bully pulpit if a borough president wants to make use of it that way.”

“They can do a lot of advising on land use and City Council members will take close notice of that,” Snyder added. “In Manhattan, where real estate matters in a big way, those advisory powers can be really significant.”

Kallos, a member of the Progressive Caucus who has refused donations from the real estate industry throughout his tenure on the City Council, suggested that he would use his bullhorn to advocate for a wide number of reforms around such issues as affordable housing and climate change. “I know exactly what the borough president’s powers are, and I would use every single one of them,” he said, “from community board appointments to legislation to all sorts of different powers.”

“Anywhere else in America, you hear stories about people struggling to get out of a small town, but here in New York City, we’re struggling to stay, and I think we can fix it,” he told JI. “I think it has a lot to do with the fact that elected officials have spent generations saying, ‘Oh, there’s an affordable housing crisis and that’s what we’re gonna do.’ But then they took money from real estate developers and then sold out their communities. And things are only getting worse.”

By his own account, Kallos has always regarded government somewhat skeptically — a view, he said, that springs in many ways from his Jewish faith. The seven Noahide laws, for instance, influenced his decision not to take outside income as a city councilman, he told JI. “In modern-day America, when we legislate, you have all these corrupting influences.”

During his time working as chief of staff for Jonathan Bing, a former Democratic state assemblyman, Kallos led an effort to put state legislators’ voting records online so voters could more easily hold their representatives accountable. “Ben was for reform before being for reform was cool,” Bing said in an interview. “That’s really been a hallmark of his career.”

Rep. Carolyn Maloney (D-NY) and the author Mark Green, who served as New York’s first public advocate from 1994 to 2001 and ran for mayor against Michael Bloomberg, have both endorsed Kallos for Manhattan borough president.

“I found Ben to be a very effective and thorough assistant when he did research for me over a couple of years, but I’ve been blown away how he’s taken it to a different level when he’s the principal,” Green, who employed Kallos as his policy director, told JI. “Chess masters and great coaches can think further ahead than their rivals, and Ben is constantly trying new things and thinking way ahead while always keeping his eye on the prize — whether it’s votes in an election or votes in the council. His drive, his planning and his decency have enabled him to stand out in the council and in the Manhattan borough president’s race.”

Kallos is optimistic that he will get the chance to enact his vision. “I want to see a worker-led recovery,” he said. “I want to invest in New Yorkers.”

He said he would build on the momentum established by Brewer, with whom he worked closely as a city councilman. “Otherwise we’re looking at everything that we’ve won, everything that we fought for just getting repealed.”

And if he doesn’t win, there’s always the path not taken for him to consider. “Seminary may still be in my future,” he told JI. “It depends on how things go. I see my service and politics and government as doing the real work of tikkun, and the idea of seminary being something that might be one of my more selfish acts. That one would be for me.”