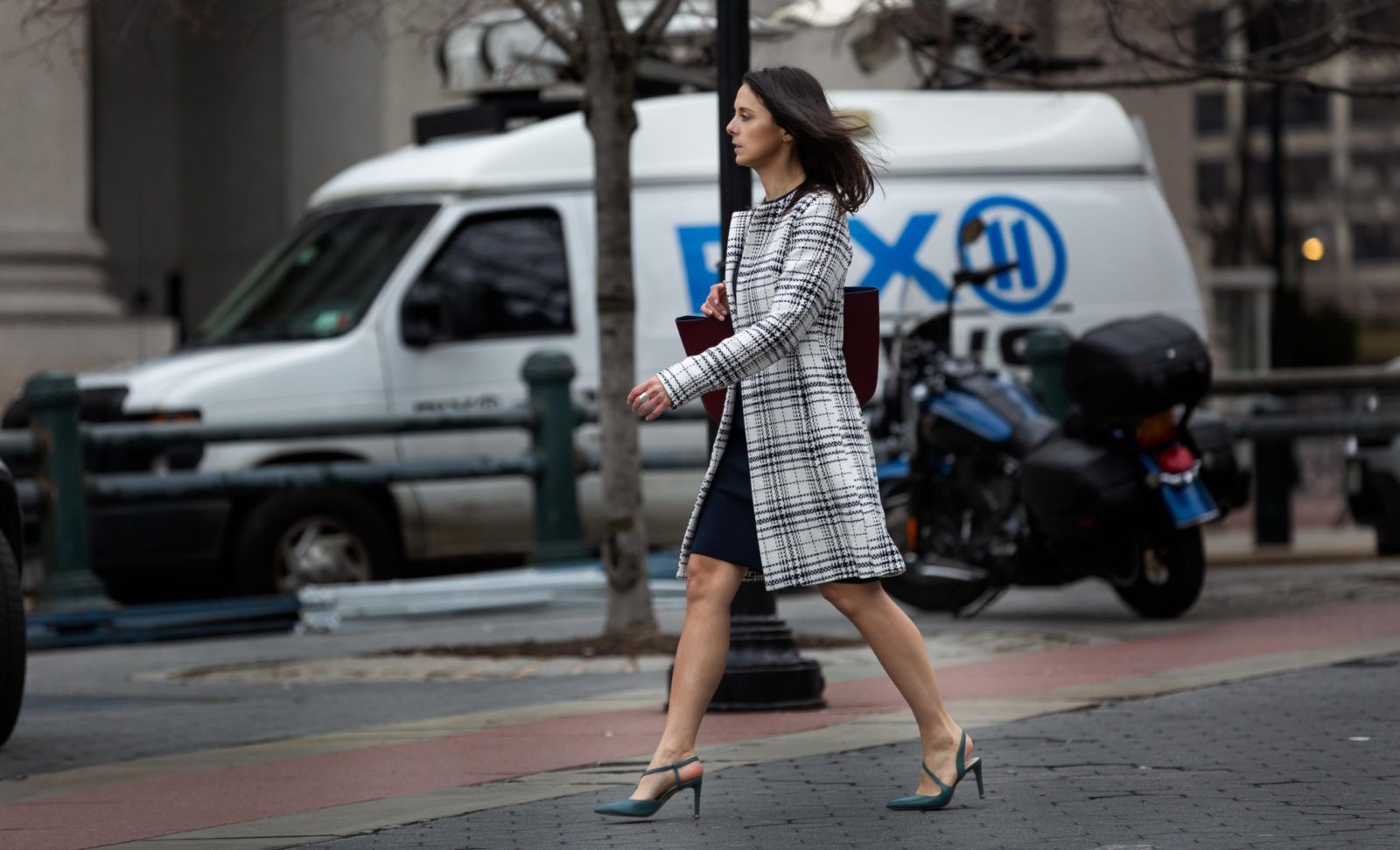 When Eliza Orlins announced her bid for Manhattan district attorney on March 5, she had no way of predicting that the entire city would be on lockdown within a matter of weeks. “This has certainly not been the campaign I anticipated running,” the 37-year-old public defender told Jewish Insider.

Despite the pandemic, Orlins has found that the issues that drew her to become a candidate in the first place have only become more urgent amid protests against systemic racism and police brutality. While Orlins anticipated knocking on doors and handing out pamphlets in subway stations ahead of the 2021 election, she has instead been engaging in a different type of activism, having attended demonstrations in Brooklyn and Manhattan almost every day since late May.

“It felt like a necessity to be there,” Orlins said, noting that she has long been involved in such demonstrations. “It’s actually unbelievable how issues that I’ve cared about for so long are finally getting the national attention that they deserve. I love seeing the possibility of massive change happening right now.”

Whether Orlins will be the one to help effect such change — at least at the legal level — depends on her chances of defeating Cyrus Vance, Jr., the powerful Democratic incumbent who has held the district attorney’s seat in Manhattan since 2010. Orlins has a long and challenging race ahead of her in a crowded field that includes New York Law School professor Alvin Bragg and civil rights lawyer Janos Marton.

The primary race isn’t until June 2021, but Orlins believes she is the right candidate for the moment. As an attorney at the nonprofit Legal Aid Society for the past decade, Orlins, who recently took a leave of absence to focus on her campaign, has represented more than 3,000 people charged with crimes but unable to afford a lawyer.

That experience has provided her with a granular view, she told JI, of an unjust system at work. “The reality is if someone’s locked up for three years, three months, three weeks or even three days, they’re exponentially more likely to reoffend or get rearrested,” Orlins said, calling out Vance’s office for its “incredibly punitive” approach to sentencing.

“It’s dehumanizing on every level,” she said, “and I’ve seen the way that this affects families.”

Orlins’s friends describe her as hyper-competitive and extremely righteous, qualities that will undoubtedly benefit her on the stump.

“She’s been fearless about pressing for discovery, pressing through hearings,” said Adam Meyer, a staff attorney at the Legal Aid Society who shared an office with the candidate. “She would always fight to make sure that she could get as much information for her clients as possible.”

At 21, she made her first appearance on “Survivor,” a show she had watched — and admired — since its premiere. She nearly won but was voted off the island of Vanuatu on the third-to-last day. She was asked to return for a second season, filmed in Micronesia, a few years later, and was quickly dispatched.

Orlins looks back fondly on her “Survivor” days, but she is careful not to make too big a deal out of them. “Some people play basketball outside of work,” Orlins said matter-of-factly. “I guess I like reality television.”

More recently, Orlins competed on “The Amazing Race.” In a scene in which she and her partner are eliminated from the show in dramatic fashion, she shows her characteristically combative style. “I hate them so much,” Orlins says of her opponents, breaking down in tears on screen. “I don’t ever want to see their faces again.”

Though Orlins mentions her “Survivor” appearance on her campaign page, she bristles when asked to delve too deeply into her sideline into reality television. She said she has been asked to appear on other shows but was never interested.

“The truth is, I’ve spent far more of my time in the trenches in front of judges than I’ve spent in front of cameras,” she said. “It’s a very small part of who I am, and I think that I’ve dedicated over a decade of my life to being a public defender and fighting for people who are charged with crimes.”

Erin Schrode, a young progressive activist who traveled to Israel with Orlins through the Schusterman Foundation’s REALITY program in 2018, said Orlins has taken advantage of her TV exposure to advocate for the causes she cares about.

“Eliza has used her platform to stand up for her values,” Schrode told JI. “When people come up to her, she’ll get them to talk about justice, bail and incarceration and her clients.”

Brian Corridan, a former “Survivor” contestant who became friends with Orlins through the TV show’s alumni network, echoed that sentiment.

“For those of us who are a bit more removed from the municipal sphere and have fewer day-to-day encounters with bureaucratic government intricacies, it’s hard for her to really leave us uneducated about it,” he said. “She holds our feet to the fire.”

Born in New York, Orlins spent portions of her childhood in Hong Kong and Beijing, where her family adopted her younger sister, Sabrina. (Orlins’s father, Stephen A. Orlins, is president of the National Committee on U.S.-China Relations.) Orlins says her sister first attuned her to the idea that not all races were treated equally.

“I knew at a very young age that my sister was not white,” she said. “I went and got her from school one day, when we were in elementary school, and she was crying because kids had made fun of her, pulling their eyes to the side and using Chinese racist slurs against her. I just remember feeling so upset by that.”

That experience, coupled with the knowledge that her Jewish grandmother had escaped Nazi persecution by fleeing Paris during World War II, imbued in Orlins a strong sense of social justice.

“It always was ingrained in me from a young age that we have to stand up for those who are persecuted,” she said.

If elected, Orlins told JI that she would work to decriminalize consensual sex work as well as low-level drug possession, instead giving treatment to those who suffer from substance abuse.

Still, Orlins believes that some meaningful advances have been made in recent weeks, such as the state’s decision to repeal a law known as 50-a, which has kept police misconduct incidents from being publicly disclosed.

“The reason, I think, why police officers are out there abusing people is because they know there are no consequences,” Orlins said.

She supports Vance’s decision to not prosecute protestors for low-level offenses, but is quick to add that his announcement is “too little too late.”

“This is a person who has locked people up for petty minor low-level offenses for over a decade,” Orlins said. “And to now try to get positive press by making this announcement that he’s not going to prosecute protesters when these are cases that would likely end up getting summonses anyhow, it’s really just a political stunt.”

Anna Durrett, a spokeswoman for Vance’s campaign, defended the district attorney’s record in a statement to JI.

“DA Vance is focused on continuing to make New York City’s justice system fairer for all New Yorkers, but particularly those who have been historically impacted by our criminal justice system,” Durrett wrote. “DA Vance has ended the criminal prosecution of tens of thousands of low-level offenses and successfully reduced gang and gun violence. He has also built Manhattan’s Family Justice Center for victims of domestic violence and invested hundreds of millions of financial crime forfeiture dollars into Manhattan communities to strengthen families and prevent crime. As he has throughout his career, DA Vance is continuing to reduce crime to historic lows, while also moving our criminal justice system forward.”

Orlins, however, believes that Vance’s time is up, arguing that the protests indicate voters are ready for a change.

She believes that her legal work gives her a leg up on her opponents, noting that a number of progressive, high-profile district attorneys around the country have been elected in recent years, and they all had backgrounds as public defenders, including Larry Krasner in Philadelphia and Chesa Boudin in San Francisco.

In the meantime, Orlins said she will continue to attend protests against police brutality as she gears up for a long campaign cycle, though she added she would be doing so even if she were not a candidate. “Just saying ‘I’m not racist,’ it’s not enough,” she said. “You have to be actively anti-racist, which means you have to be intentionally trying to dismantle structural racism.”

“My priority,” Orlins concluded, “is overhauling the criminal-legal system in New York that doesn’t keep us safe.”