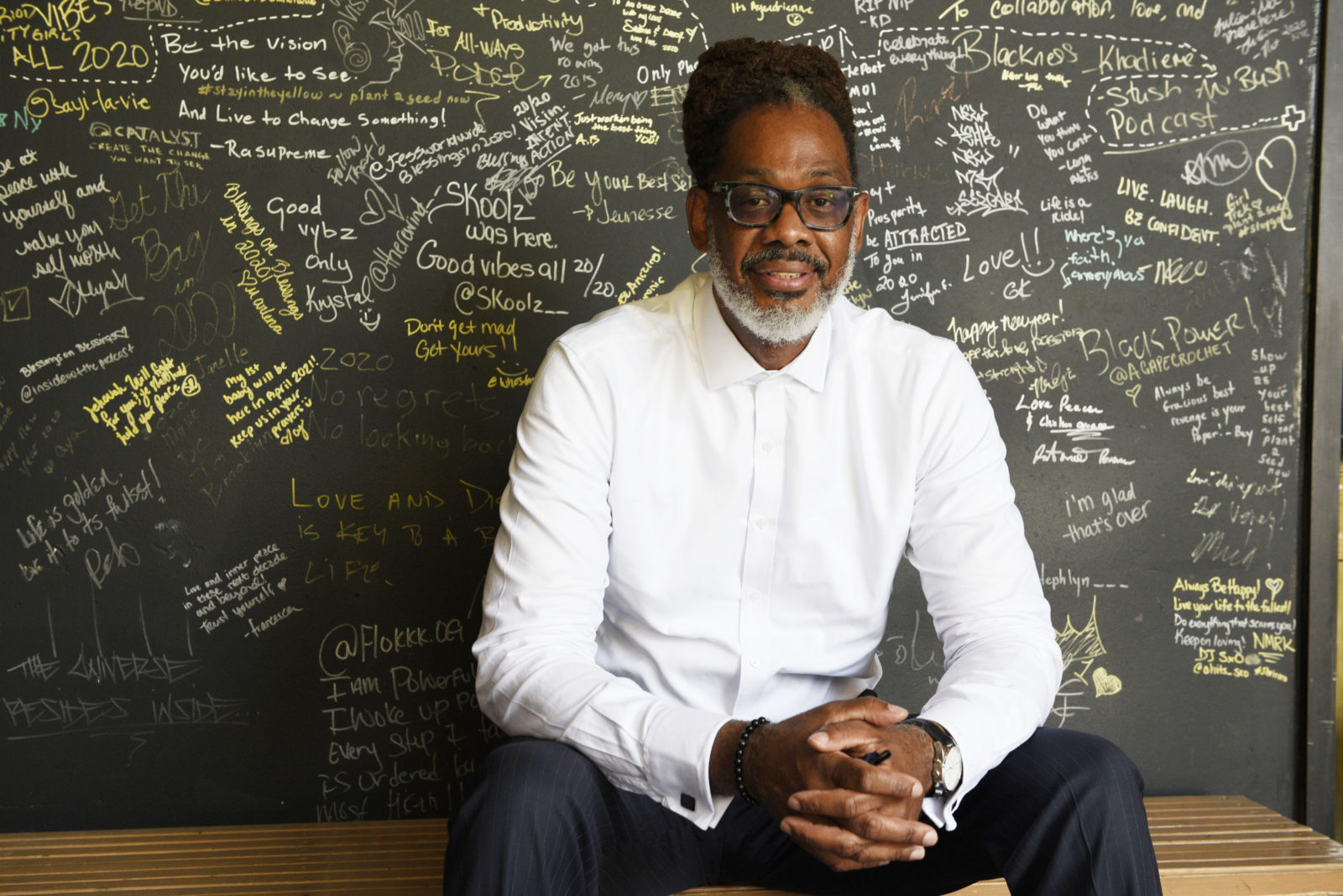 With his towering 6-foot-10 frame topped by a bundle of impressive dreadlocks, Robert Cornegy, Jr., a New York City councilmember who until recently claimed the title of tallest politician in the world, was hard to miss as he sauntered into Basquiat’s Bottle, a trendy bar and restaurant on a commercial drag in the Brooklyn neighborhood of Bedford-Stuyvesant.

“This is one of the restaurants that’s kind of central to the community,” Cornegy, 55, told Jewish Insider on a recent Sunday afternoon, settling in at a table in the back while contemplating an order of shrimp and grits.

Cornegy, whose district includes Bedford-Stuyvesant as well as Crown Heights, is now competing for the more high-profile role of Brooklyn borough president — and he has been savoring the opportunity to step away from Zoom, hit the pavement and make a more personal impression on potential voters with just weeks remaining until the June 22 Democratic primary.

“Because I’m such an attraction, I’m used to meeting people and engaging people,” said Cornegy, who wasn’t boasting so much as accurately characterizing his striking height. “I’m on the doors, I’m in the streets, I’m in bars, I’m in restaurants talking to people. When people generally get a chance to speak to me and know me, whether they’re with me or not, they walk away with a solid impression.”

But Cornegy is relying on more than just his memorable presence as he jockeys to succeed Eric Adams, the outgoing borough president and mayoral hopeful. In recent months, Cornegy has established himself as a leading contender in the crowded field of more than a dozen candidates, tying for first place in one poll alongside fellow city councilmember Antonio Reynoso, with Assemblymember Jo Anne Simon, who leads in fundraising, not far behind.

While Reynoso has pulled in support from a number of leading progressives, Cornegy is carving out a center-left lane, having earned endorsements from several prominent Jewish community leaders as well as influential celebrities including Tracy Morgan and Spike Lee.

Facing term limits in the City Council, where he has served since 2014, Cornegy believes that he is best qualified to usher his home borough into a post-pandemic era, citing his current role leading the housing and buildings committee as well as his prior experience chairing the small business committee.

“During the pandemic, it became incredibly evident to me that whoever was going to lead this borough had to have a solid understanding for the recovery process of small business and job creation and responsible development,” said Cornegy, who is also chairman of the council’s Democratic Conference. “While we try to fight for affordability in an ever-increasing, unaffordable borough, the person couldn’t be just a ‘no, no, no’ person. It had to be somebody who was willing to fight the hard fight around affordability and who had some acumen within that.”

The borough presidency is largely ceremonial, holding some substantive duties like community board appointments and zoning and land use recommendations. But Cornegy says he is excited by the role because it nevertheless represents a powerful platform.

“We have the largest bully pulpit probably in the state outside of the mayor of New York and the governor,” he argued, indicating that the primary pillars of his campaign are job growth, affordable housing and public safety — perhaps the issue on which he is most passionate.

The city councilman was an active presence last summer at social justice demonstrations in his district, where a Black Lives Matter mural was painted in bright yellow letters onto a block-length stretch of Fulton Street he helped turn into a pedestrian plaza. But while Cornegy advocates for increased policy accountability, he has distanced himself from efforts to defund or abolish the police.

“I don’t think it’s mutually exclusive to demand reform and accountability in the criminal justice system — I’m a Black man in America — while still supporting a platform for solid public safety,” said Cornegy. “I don’t think you have to abandon one for the other.”

He says his constituents are largely in agreement with his views. “My community, the community of Bedford-Stuyvesant and northern Crown Heights, has never demanded abolishing or defunding the police,” said Cornegy, who believes that police officers should live in the neighborhoods they work in and advocates for the establishment of a mental health emergency response unit. “They’ve demanded policing in their communities that didn’t violate their civil and human rights, and I think most people would agree with that as a narrative.”

Still, Cornegy has found himself at odds with progressives who support more sweeping reforms. “He’s trying to signal that he understands policing is a problem, but almost every elected official is saying that,” said Alex Vitale, a professor of sociology at Brooklyn College and the author of The End of Policing. “He does support some small investments in non-police public safety strategies, but those proposals are very small in scale and don’t reduce the burden of policing.”

Cornegy took issue with such criticism, noting that he is deeply engaged in reform efforts, pointing to his sponsorship of a chokehold criminalization bill as well as his support for ending qualified immunity, which has long protected police officers from wrongdoing.

“I can go all the way back where we’ve been witnessing this regularly in our communities and trying to find a substantive way for long-term, substantial change, and have been working towards that,” he told JI. “I think that there was a little bit of a disregard for that hard work that some of us have put in.”

Others have appreciated his approach. “Security is a major issue, especially considering all the anitsmeitic incidents,” said Leon Goldenberg, a prominent Orthodox Jewish real estate executive and talk radio host in Midwood who, as a member of the Flatbush Jewish Community Coalition, recently endorsed Cornegy.

If elected, Cornegy said he will use the borough president’s office as a “sanctuary” for victims of hate crimes while working to assemble a task force for attacks within Brooklyn. “In order to get a hate crime designation, it takes almost an act of god,” said Cornegy, who adds that he will encourage Brooklyn’s district attorney to act more forcefully on such designations. “This kind of hatred, unchecked, only escalates.”

Cornegy has longstanding ties with Brooklyn’s Orthodox Jewish community thanks in part, he said, to his support for causes like security funding of yeshivas. “My agenda for public safety certainly encompasses the Orthodox community and my narrative around public safety,” he said.

Such relationships, he says, have only accrued over time. “I celebrate the fact that, yes, while I’ve gotten Orthodox support,” Cornegy said, “it has come out of hard work together.”

“I’ve worked on behalf of an issue that was germane to a particular demographic, and so that demographic now feels confident that, as a Black man, I could still have Jewish issues or Hispanic issues or Polish issues. I have a Polish contingency,” Cornegy told JI. “But those are all forged out of doing work that positively impacted those communities. So there’s this kind of feeling that, ‘OK, he’s Black, but he has a larger view of what the needs of public communities outside of his own are, and potentially can advocate on our behalf as well.’”

“I would say his claim to fame is he’s really a consensus builder,” said David Greenfield, the CEO of the Met Council and a former city councilman who served alongside Cornegy. “In Brooklyn, which is a big, complicated, complex borough, he’s done a good job bringing people together.”

The son of a Southern Baptist minister who grew up in Bedford-Stuyvesant, Cornegy — now a father of six — played basketball at St. John’s University, went to the Final Four and then played professionally overseas for 15 years. He spent some of that time playing in Israel in the early ’90s — while also living briefly on a kibbutz because he wanted to immerse himself in the culture — an experience he describes as formative. “I played on teams where they were professional athletes and still served in the military,” he recalled. “When I would ask why, there was a level of patriotism that existed that I didn’t even think existed in the United States.”

“I’m a patriot,” Cornegy said. “I love the United States of America. But I hadn’t seen that before.”

Cornegy described the recent violence between Israel and Hamas as “incredibly disturbing,” adding: “I was there, and I understand protecting your homeland from people who really have to do that on a consistent basis.”

“Because we’re such a diverse borough, it is always on my mind how to bring peace here, at least, because you’ll see that there are conflicts that are happening on our homeland because of what’s happening there,” Cornegy told JI. “That disturbs me a lot, because for the most part, here in the borough, we kind of live cohesively together, and I’m always thinking about what can I do as the Brooklyn borough president to alleviate some of that pressure that people are experiencing.”

That impulse was on display, on a smaller scale, at Basquiat’s Bottle in Bedford-Stuyvesant the other day, when a kitchen worker approached Cornegy to thank him for providing a free suit for his graduation not long ago. And although the city councilman only had a glass of water, he still bought a round of drinks for the wait staff — he abstained — rather than leaving the restaurant without having ordered anything.

It was clear that Cornegy was enjoying his status as a kind of community fixture as he campaigns for the opportunity to expand his web of connections.

Cornegy gained some prominence outside of Brooklyn when, having undergone a rigorous vetting process, Guinness World Records deemed him the world’s tallest politician a couple of years ago. But he lost his crown after an insurance commissioner in North Dakota beat him by a centimeter. “A centimeter,” Cornegy emphasized, sounding a note of amused annoyance, “and some obscure elective role that I’ve never even heard of before.”

He didn’t seem too bothered by it, though. “I’m still the people’s champ here in New York,” he said. “I’ll take that.”