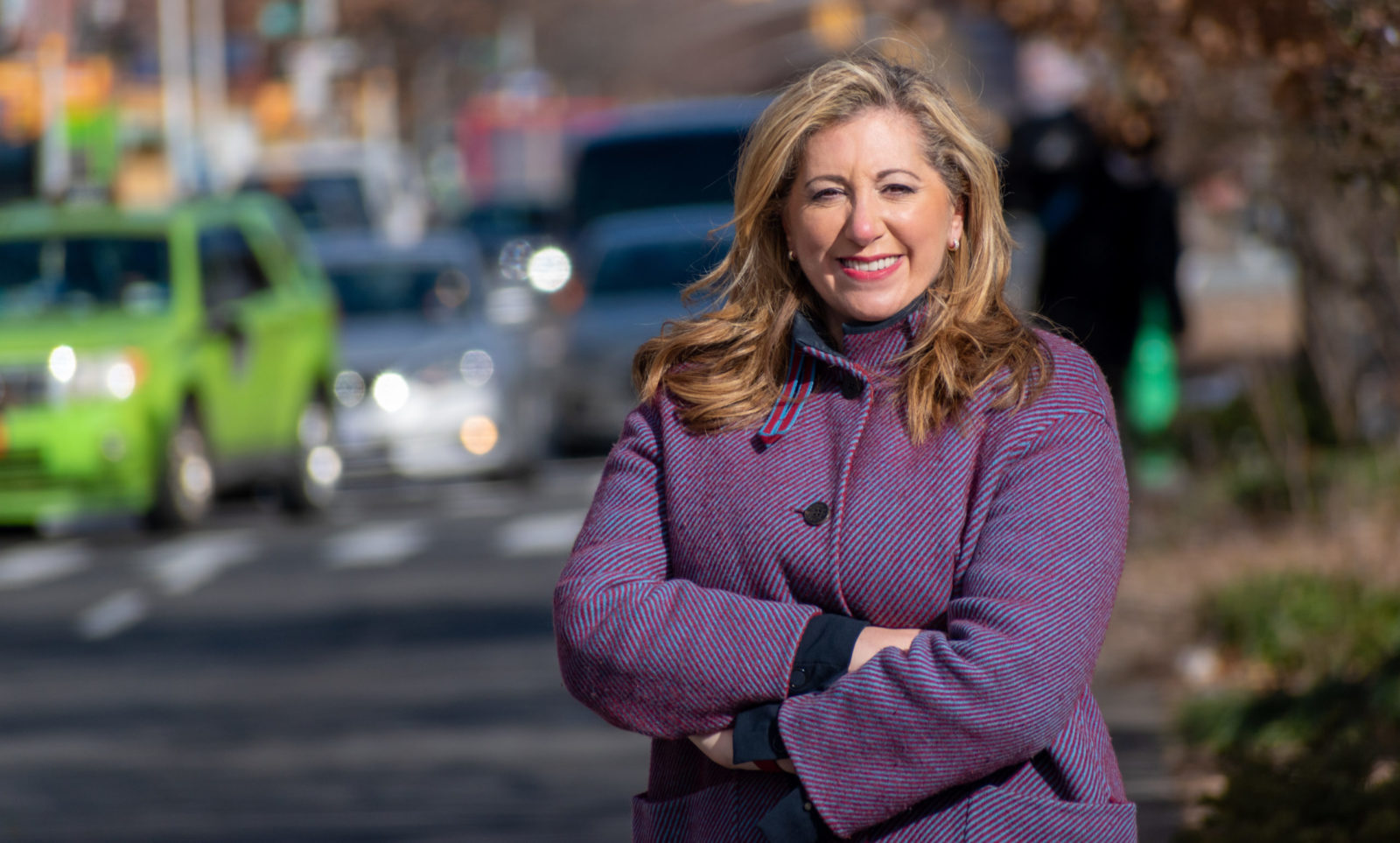 Former Assistant District Attorney Diana Florence is distancing herself from her most recent boss, Cyrus Vance, Jr., despite having worked under him for a decade

In Manhattan’s crowded district attorney race, there have been few kind words spared, if any, for Cyrus Vance, Jr., the long-serving Democratic incumbent who announced earlier this month that he would not seek reelection. Though he is now leading a high-profile investigation into former President Donald Trump’s finances — one that is likely to be inherited by the next DA — Vance has drawn scrutiny for previously declining to prosecute Trump’s family members as well as disgraced film mogul Harvey Weinstein, while requesting a downgraded sex-offender status for Jeffrey Epstein.

Diana Florence, one of eight Democratic candidates competing in the June primary, has emerged as one of Vance’s most outspoken detractors — and she claims to speak from experience, having worked under him for about a decade. “I’m running on my record of 25 years of standing up to power and bringing landmark, record-breaking cases,” Florence told Jewish Insider in a recent interview. “I did that in spite of Cy Vance.”

The 50-year-old former assistant district attorney stepped down from her position as the head of Vance’s formidable Construction Fraud Task Force last January after she was accused of withholding evidence in a series of bribery and corruption cases. “I made an inadvertent mistake,” she acknowledged. “I owned it, because that’s what leaders do.”

Still, Florence didn’t go quietly, charging in her resignation letter that her unit had been “stripped” of “resources” and that she had faced a “hostile work environment” and “bullying conduct.”

In an interview with JI, Florence sought to distance herself even further from Vance, aligning herself with his predecessor, Robert Morgenthau, who died in 2019 and presided over the office for 35 years. “I spent the bulk of my career under him,” said Florence, who worked for Morgenthau from 1995 until his retirement in 2009. “He taught me that serving the public is a privilege, and it’s my honor to have fought alongside people who never thought they’d win.”

Barbara Thompson, Morgenthau’s former longtime communications director, seconded Florence’s self-assessment. “She was what we could call a Morgenthau assistant,” said Thompson, who now works as a treasurer on Florence’s campaign. “She was hired by him and trained under him while he was district attorney.”

Vance’s office did not respond to a request for comment.

It remains to be seen whether Florence will succeed in her effort to separate herself from Vance, who is also a protegé of Morgenthau’s, at a time when any connection with him may be seen as a liability. Lucy Lang, the only other candidate in the race who worked under Vance, has taken a similar if more restrained approach, telling JI in an October interview that, if elected, she would not tolerate “even the appearance of impropriety.”

The other candidates in the race include former federal prosecutors Tali Farhadian Weinstein and Alvin Bragg as well as former public defender Eliza Orlins.

But Florence is confident that her track record will outshine her opponents, pointing to her involvement in a variety of wage theft, domestic violence and construction cases.

Five years ago, Florence secured a major manslaughter conviction against a general-contracting firm after Carlos Mencayo, a 22-year-old undocumented Ecuadorean worker, was buried alive at a construction site in the Meatpacking District. “My approach,” Florence said, “has always been about prioritizing the people in a given case and looking at the cases beyond the four corners.”

“I’m running to prioritize crimes of power, not crimes of poverty,” she told JI, going on to list sexual assault, domestic violence, gun trafficking, labor crimes, tenant harassment and police accountability as her main areas of focus. “Those are the crimes that I will prioritize in the office.”

Pursuing such crimes, she told JI, would have ripple effects beyond the precincts of the district attorney’s office. “When we prosecute corruption crimes, we can recover stolen money from taxpayers, which we can immediately reinvest into our housing, our health care, our transportation systems, our schools — and that’s how we ultimately break the cycle of inequality in the city.”

As the descendant of Holocaust survivors on her father’s side, Florence said she was concerned about the recent uptick in hate crimes against Jews as well as Asian-Americans. She characterized the current DA’s approach to hate crimes as “reactive,” countering that the office would need to take a “proactive” role in addressing incidents of antisemitism and other forms of bigotry.

“We need to go after hate groups in their pocketbook,” she said. “During World War II or just before it, there were neo-Nazi groups here in New York. They were not-for-profits, and they were prosecuted. We can proactively look at these hate groups and attack their funding and figure out if they’re doing money laundering or other financial crimes. That’s one way to really attack hate groups and really stop them in their tracks.”

Florence’s cousin was Yitzhak Moda’i, the late Israeli politician who served in a number of influential ministerial roles. She said he instilled in her a dedication to public service — as did his wife, Michal Har’el, a former president of the Women’s International Zionist Organization and an advocate for victims of domestic violence. “Michal did a lot of work with opening domestic violence shelters,” Florence recalled, “When I was a domestic violence prosecutor, we spent a lot of time talking about that.”

“One particular case that I’m really proud of involved a husband who attacked his wife with the backside of a hammer,” Florence said. “It was a serious case that came in undercharged. It came in as a simple assault.”

Florence said she elevated the case to attempted murder, working closely with the victim as well as her two young daughters, who witnessed the crime, as they prepared for the trial. Just before jury selection, Florence told JI, the husband pleaded guilty.

It was a transformative moment, according to Florence, who said that while the mother has since died, Florence has kept in touch with her children. “I’ve seen how, even though they had a traumatic situation, it really was able to become a turning point for their lives,” Florence explained. “Their lives were better for being part of the justice system.”

Florence, who was born in Manhattan, matriculated at the University of North Carolina at Chapel Hill in the late 1980s with the intention of pursuing a career in classical singing. “I very quickly realized that the apex of my talent was getting into college, but ultimately my path was not to pursue music, and I decided to go to law school thinking that I would be a public defender.”

But she changed her mind while working at a public defense clinic representing day laborers in North Carolina. “What I saw was that the prosecutor was the person in the process that had the quickest way to justice,” she said. “One decision by the prosecutor could make the difference between a good resolution or catastrophe for the individual, and so I realized that I wanted to be a prosecutor because I wanted to change the system from within.”

Now that she is running for one of the most high-profile prosecutorial roles in the country, Florence has given herself the somewhat daunting task of overhauling an office that many view as in need of renovation.

But despite her criticism of Vance, Florence suggested that there was at least one aspect of his legacy she would seek to continue.

In a statement to JI, Florence said she would be well-equipped to take on the Trump investigation if voters choose her to succeed Vance, who has been in office since 2010.

“I am the only candidate in the race who has successfully prosecuted powerful real estate interests, the industry that jump-started Donald Trump’s career,” Florence boasted. “As Manhattan DA, I will follow the facts without fear or favor, never bowing to power or acting only after public outcry.”

Still, the allusion to one of Morgenthau’s favorite lines — “without fear or favor” — was an indication that she wouldn’t be giving her most recent boss much credit for the case.

“The deference to power under Cy Vance was unprecedented,” Florence said, “and it is anathema to what I learned under Morgenthau.”