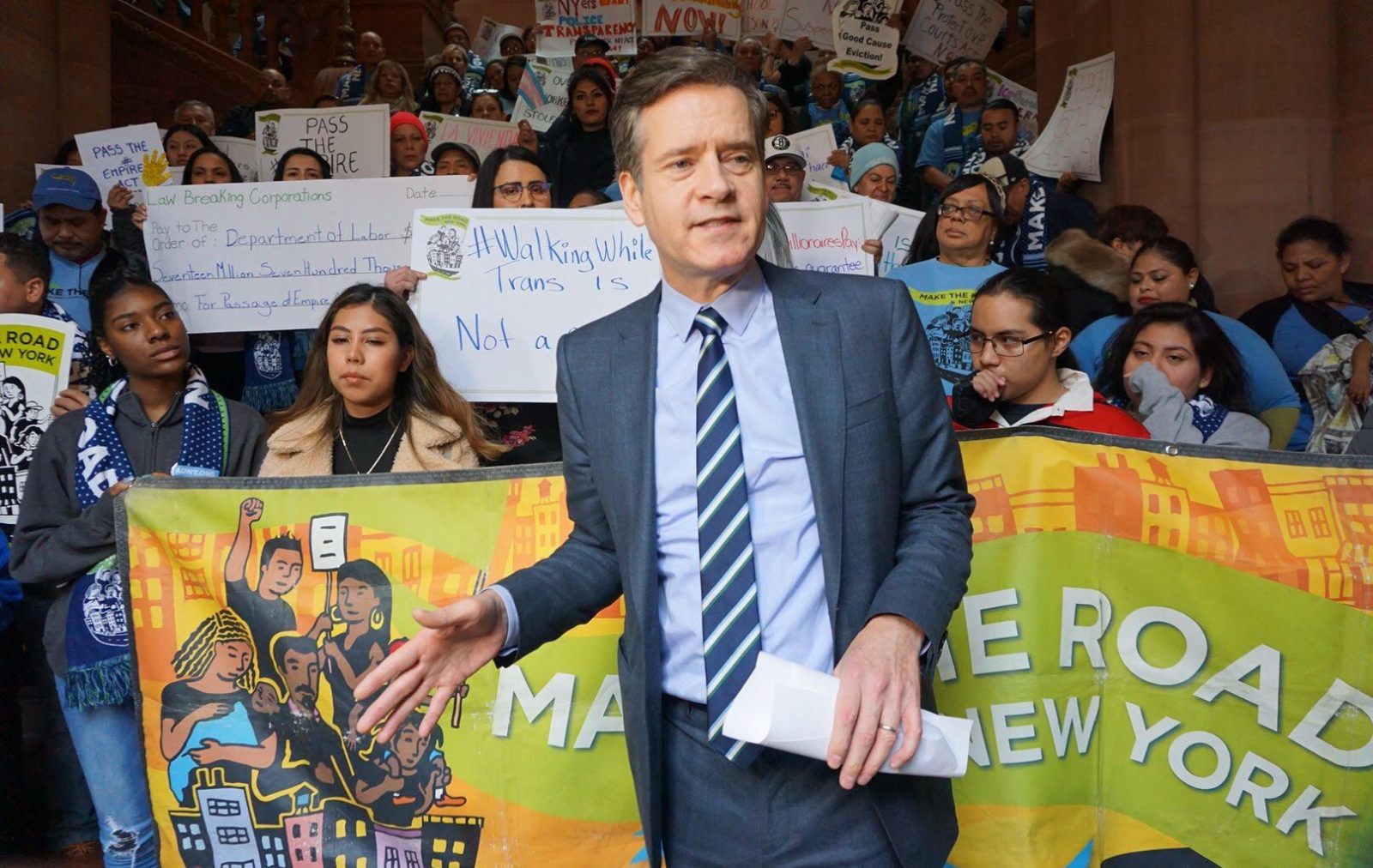 Brad Hoylman sets his sights on the Manhattan borough presidency

Like any new transplant, New York State Sen. Brad Hoylman was initially disoriented by the abrupt change of scenery when he decamped to Manhattan from rural West Virginia 27 years ago. “It was a bit of ‘fish out of water’ for me,” Hoylman recalled recently in an interview with Jewish Insider. “I was lucky enough to win a scholarship and get out of West Virginia and find myself sleeping on a couch in a friend’s apartment in Gramercy.” Soon enough, however, he acclimated to his new environment. “I met my husband shortly thereafter, and we’ve been together ever since,” he said. “We live on the same block where we first moved in together on 10th Street.”

Hoylman had, in a manner of speaking, managed to carve out a piece of small-town Appalachia in the bustling borough of Manhattan, immersing himself in local civic life as he worked his way up from the block association to the community board. “I really believe in community boards,” he said. “They’re our think tanks.” Finally, he landed at his current perch in Albany, where he represents a vast swath of Manhattan covering such neighborhoods as Greenwich Village, Chelsea, Hell’s Kitchen and Times Square in the state Senate.

Recently, though, the 55-year-old has been feeling homesick after nearly a decade of upstate politicking. Now, he is seeking a new job that will allow him to engage on a more intimate level with his adopted city: Manhattan borough president. “These elections are a time for us to both reset our values and double down on local participation,” Hoylman said. “It’s been an honor to be in the Senate for close to 10 years, and I’m looking forward to coming home and continuing that service at the city level.”

Hoylman, who would be the first openly LGBTQ borough president, is competing in a crowded field to succeed outgoing incumbent Gale Brewer, now running to reclaim her old seat on the City Council. His opponents include City Councilmembers Mark Levine and Ben Kallos, as well as Lindsey Boylan, a former congressional candidate who has accused Gov. Andrew Cuomo of sexual harassment, and Elizabeth Caputo, a former Upper West Side community board chair.

In many ways, the position represents a potential return to form for Hoylman, who will be tasked with making community board appointments and land-use recommendations, among other duties, if he is elected. But because the role is largely advisory, it also symbolizes something of a tonal shift for a legislator who boasts of having passed more than 100 bills during his time in the Senate and who now serves as the powerful chair of the Senate Judiciary Committee.

Hoylman acknowledged that the title he is pursuing may not always be as lofty as the one he is hoping to vacate, despite its significantly higher profile. “Someone once said to me, ‘Well, you’ll have to buy a really big pair of scissors for all those ribbon cuttings,’” he joked. “I think that’s actually a very optimistic viewpoint given our local economy and the number of small businesses that are shuttering. But yes, there is ceremony — there is the bully pulpit.”

Still, in the interview with JI, Hoylman argued that the job had great potential. “For me, coming from a very small town and being interested in government and politics my whole life, working on a community board, you really get an understanding of how civic life is organized,” he said. “The borough president plays a big role in that regard. I’ve always had enormous respect for the position as, essentially, planner-in-chief for the borough.”

“The borough president plays a role in everything from legislation to public hearings to overseeing city services to weighing in on issues of public education,” Hoylman added. “Each and every one of those aspects are under a hot white light right now as we try to find our way through this COVID crisis and address a lot of the inequalities that have been stripped throughout the pandemic. And as a legislator, after having been on a community board for 10 years, and then moving to full-time public duties as a state legislator, I feel like I’ve got the record, frankly, to demonstrate to Manhattan voters that I can do the job.”

Hoylman argued that he had achieved substantive results in Albany, pointing in particular to an assortment of recent legislative accomplishments including bills increasing police transparency, restricting price gouging on personal protective equipment and, last month, repealing a law against “loitering for the purposes of engaging in prostitution” that advocates claimed disproportionately affected transgender women of color.

“He loves policy and really digs into it,” said Scott Wiener, a California state senator who has known Hoylman since their first year at Harvard Law School and was recently inspired to introduce the same anti-discrimination bill in the Golden State after his friend got it passed in New York. “Whatever he can possibly do as borough president, he will do the most and then some.”

Hoylman laid out a series of bold policy proposals as he discussed his vision for the office. One such plan he described as an in-house data collection system dubbed “Borough STAT,” a kind of dashboard that would allow Manhattanites to determine how city services are being deployed in their neighborhoods. Hoylman added that he would ban lobbyists and elected officials from serving on community boards, which he regards as a conflict of interest, while instituting what he calls a “Manhattan Marshall Plan,” that would empower local communities to set their own priorities around social services and land use, among other things.

Perhaps his most personal proposal would initiate a borough-wide screening of all kindergartens for children with dyslexia and other learning disabilities — an effort he characterizes as one that is low-cost, takes little time to implement and is highly effective.

“We’ve been teaching our children to overcome dyslexia for the better part of a century, but for whatever reason, not every school is equipped for this type of regimen,” said Hoylman, who learned last year that his 10-year-old daughter is dyslexic, a condition that affects around 20% of the U.S. population. “Let’s give parents the information first and try to work on some solutions once we understand the gravity of the problem.”

Sally Shaywitz, who runs the Yale Center for Dyslexia and Creativity, said she had spoken with Hoylman about his plan and believes it will be game-changing for young children who experience feelings of profound inadequacy when they are undiagnosed. “I can’t tell you how excited I am that Brad is so interested in doing this, and will do it,” she said. “There are a lot of people who talk big but don’t act. He’s someone who talks but acts. I think he would be a wonderful gift to the children of Manhattan.”

Hoylman has often advocated on behalf of children in his time as a legislator. One of his proudest moments, he said, was when he passed a bill called the Child Victims Act. Signed into law in 2019, it allows adult survivors of child sexual abuse to file claims against their abusers or the institution, such as a school or church, that protected the abuser.

The state senator lives in the West Village with his husband, the filmmaker David Sigal, and their two daughters. Before the pandemic, they were regular attendees at Congregation Beit Simchat Torah, an LGBTQ synagogue in Manhattan. Hoylman, who was raised Catholic, converted to Judaism two years ago, a decision he made after his children were born through surrogacy.

“We had always gone to [services on the] High Holy Days, but I thought it was time to make it official now that we had children,” Hoylman said. “So, during the legislative session, I went through a conversion course with my husband. My husband thought I was going to be missing a lot of the classes we attended together, but we actually did not, and it was a real bonding experience. It really renewed our understanding of each other, and we had our children officially converted as well [at] the Upper West Side mikvah.”

Hoylman described the process as a kind of “awakening” that helped confirm his devotion to public service. “It wasn’t an overnight conversion, I can guarantee you,” he said. “But it was really one of the most poignant and moving experiences I think I’ll ever have.”

“Being Jewish is very deep in his soul and very important to him,” said Rabbi Sharon Kleinbaum, the spiritual leader of CBST, who led Hoylman’s conversion. “It was a matter of his aligning his identity really deeply with the Jewish people.”

Shortly after the 2016 presidential election, Hoylman was the target of an antisemitic pamphlet sent to his home, which was also defaced with swastikas. “The antisemitism directed at my family was most certainly kind of stunning,” he said. “It, I think, represented what was unleashed after Trump’s election, and we saw the culmination, of course, during the Capitol insurrection.”

But the hate crime, he said, didn’t deter him. “Partly because I’m gay, partly because I’m Jewish, my husband’s Jewish, my family is, and partly because I stand up to bullies — I’m proud of that,” Hoylman told JI. “Whether it’s the NRA, anti-vaxxers, Big Tobacco, the real estate lobby — I’ve taken on Donald Trump himself. I’ve taken on some of those big fights. It energizes me. I feel that that’s something I hope Manhattanites recognize in this campaign, that they have a fighter on their side who gets things done and has a record of accomplishments to back it up.”

Hoylman averred that his faith has grounded him in his personal and professional life as he seeks higher office. “I really take a lot from my understanding of Judaism and my family’s experience to the office with me when I’m a state senator,” he told JI, “and hopefully when I’ll be a borough president.”