Kushner heading for Mideast as peace deal in question 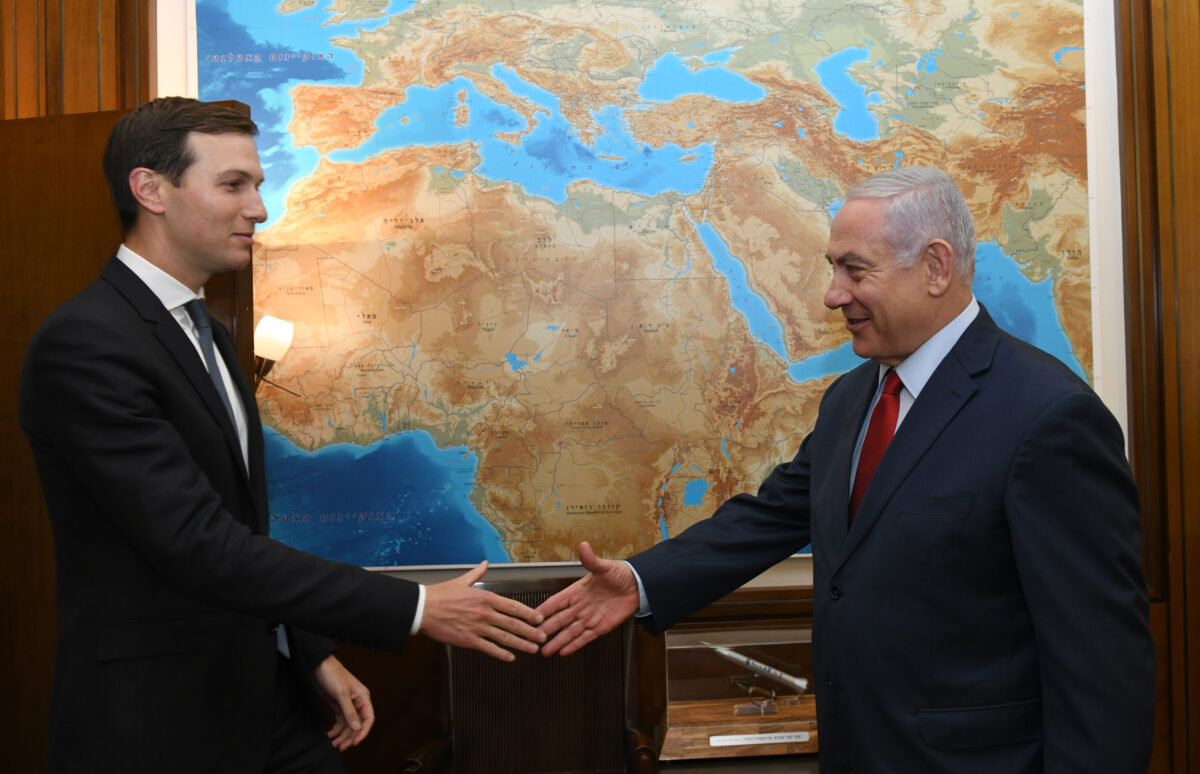 Jared Kushner is expected to visit Jerusalem on Sunday to meet with Israeli Prime Minister Benjamin Netanyahu and Blue and White leader Benny Gantz and discuss the rollout of the peace plan. Kushner will be joined in Israel by advisor Avi Berkowitz and Iran envoy Brian Hook. Outgoing Mideast peace envoy Jason Greenblatt will not be part of the delegation, and is expected to leave his post by the end of the month.

Why is matters: Kushner’s arrival comes at a very politically sensitive time. Netanyahu failed to form a government, and his rival, Gantz is now tasked with building a coalition. But it’s unclear whether any government can be formed, or if yet another election will delay stability well into the spring. The White House will therefore have to decide whether to once again postpone the release of the peace plan.

Losing patience? In an interview with Arutz Sheva last week, U.S. Ambassador to Israel David Friedman said that Washington is “desperately” waiting for a new government to be formed to release the plan and “do so in a way where we’re able to relatively immediately be able to gauge a response from the Israeli government.” An administration official tells JI’s Jacob Kornbluh that “no doubt there is frustration about the prolonged political crisis in Israel, but the decision to wait until it is resolved is correct and not under debate.”

Do Israelis still trust Trump? “The peace plan could have been the glue that helps form a unity government, but not after Syria,” Shimrit Meir, an Israeli analyst and commentator, explains. “The Israeli public is moving quickly from a ‘please continue to shower us with your gifts’ attitude to a ‘stay away from everything that has to do with us’ one.”

Former U.S. Ambassador to Israel Daniel Shapiro tells JI: “The fiasco in Turkey — in which Vice President [Mike] Pence caved to all of Erdogan’s demands, the Syrian Kurds got screwed, and Trump claimed a great victory — tells us everything we need to know about Trump’s dealmaking. The substance is irrelevant. He’ll claim any deal, no matter how base the humiliation, is the ‘greatest deal ever.’ Given the chance, he would do the same on Iran. Why Israelis, Palestinians, or really anyone would feel confident about engaging in a negotiation under his sponsorship is beyond me.”

Predetermined outcomes: A U.S official tells JI that the decision to withdraw from Syria or the impeachment inquiry “doesn’t really much affect how the plan will be received. It was always going to be rejected instantly by the Palestinians and applauded by the Israelis.” However, the official suggested, “the Trump administration’s clout is not what it was a couple of years ago,” especially if the plan is presented in 2020 or late 2019 — as the presidential election nears.

Aaron David Miller, a senior fellow at the Carnegie Endowment for International Peace, explained: “Even without what I call the mother of all distractions — the end result of the impeachment inquiry and the likelihood of a Senate trial — between the coalition tumult in Israel, the battering and hammering that Trump is taking from his allies with respect to his betrayal of the Kurds, and the unlikelihood that this plan would ever have materialized as an operational blueprint to actually launch a negotiation, I think that this trip is just an effort to demonstrate a sort of proof of life station-identification.”

Top-op: Former Ambassador to Israel Martin Indyk writes in the November issue of Foreign Affairs that Trump has “nothing to show for his efforts to counter Iran or promote peace in the Middle East. Instead, his policies have fueled the conflict between Iran and Israel, alienated the Palestinians… and split the Gulf Cooperation Council, possibly permanently.”