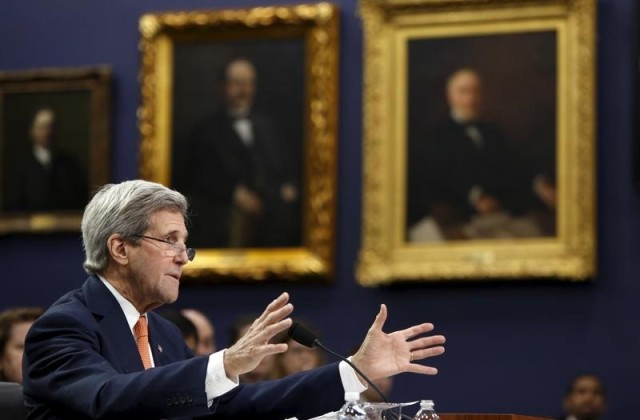 President Trump accused former Secretary of State John Kerry of encouraging the Iranians to rebuff his overtures to negotiate a new nuclear deal during a press conference at the White House on Thursday.

“What I’d like to see with Iran? I’d like to see them call me,” Trump said. “You know John Kerry speaks to them a lot. John Kerry tells them not to call. That’s a violation of the Logan Act. He is talking to Iran  — and has been. He has had many meetings and many phone calls and is telling them what to do.”

Trump further suggested that the Justice Department should prosecute Kerry for violating the Logan Act, “but my people don’t want to do anything” that’s political.

Last year, the Boston Globe reported that the former secretary of state was holding meetings with the main partners in the JCPOA to save the international accord. In September, Kerry admitted that he’s sat down with Iranian Foreign Minister Javad Zarif “three or four times” abroad since leaving office.

According to Trump, the Iranians would be wise to engage in talks with the U.S. in exchange for sanctions relief and “put them back into good shape” following the U.S. withdrawal of the 2015 nuclear deal and reimposition of economic sanctions. “We can make a fair deal. We just don’t want them to have nuclear weapons,” he said. “[That’s] not too much to ask.”

“We are not looking to hurt Iran,” Trump continued. “I want them to be strong and great and have a great economy, but they are listening to John Kerry, who has violated a very important element of what he’s supposed to be doing. They should call, and if they do, we are open to talk to them. We have no secrets.”