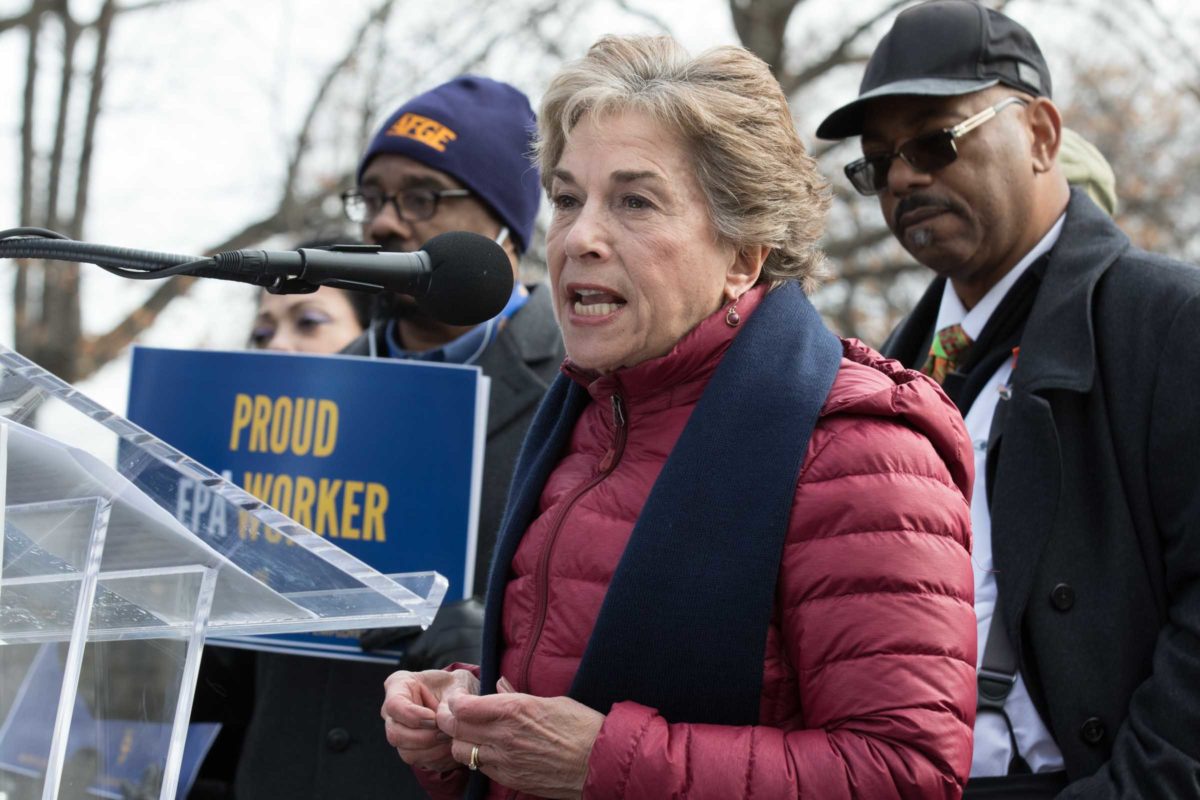 A draft of a letter to Blinken obtained by Jewish Insider, which is being led by Rep. Jan Schakowsky (D-IL), and has been signed by Reps. Mark Pocan (D-WI), Andy Levin (D-MI), Jamie Raskin (D-MD) and Pramila Jayapal (D-WA), urges Blinken to “consider multiple definitions of antisemitism, including two new definitions that have been formulated and embraced by the Jewish community,” pointing to the Nexus Document and the Jerusalem Declaration on Antisemitism.

The IHRA definition, first developed in the mid-aughts by a collective of government officials and subject experts, was used as guidance by successive Republican and Democratic administrations dating back to the George W. Bush administration, and codified by a 2019 executive order from former President Donald Trump. The push to codify the definition was born out of a 2014 meeting in then-Senate Majority Leader Harry Reid’s (D-NV) office.

While there is some overlap between the two more recent definitions and the IHRA working definition of antisemitism — which has been adopted by dozens of countries, many of them European — both the Jerusalem Declaration on Antisemitism, a majority of whose signatories are academics, and the Nexus Document, which was authored by U.S.-based academics, allow more space for criticism of Israel. The Jerusalem Declaration describes the Boycott, Divestment and Sanctions movement as “not, in and of themselves, antisemitic.”

The Nexus Document pushes back on the idea — included in some of the IHRA definition’s associated examples — that applying double standards to Israel is inherently antisemitic. The Nexus Document argues instead that “paying disproportionate attention to Israel and treating Israel differently than other countries is not prima facie proof of anti-Semitism” and that “there are numerous reasons for devoting special attention to Israel and treating Israel differently.” The Jerusalem Declaration similarly argues that boycotts of Israel are not inherently antisemitic.

“While the IHRA definition can be informative, in order to most effectively combat antisemitism, we should use all of the best tools at our disposal,” the letter argues. The letter will remain open for signatures until Tuesday.

Left-wing Jewish groups, including J Street, have been vocal about their concerns with the IHRA definition.

Abe Foxman, the former director of the Anti-Defamation League who led the organization while the IHRA definition was being developed, argued that this criticism stems from disagreements with Israeli policy, rather than legitimate issues with the IHRA definition itself.

“The common denominator of all the groups who don’t like the current definition are groups that have issues with Israel,” Foxman said. “[The IHRA definition] included a new dimension of antisemitism which was anti-Israel and anti-Zionism because in the last 20 years or so, antisemitism metastasized to use Israel as a euphemism for attacking Jews.”

In a letter to the American Zionist Movement in February, Blinken said that the Biden administration “enthusiastically embraces” the IHRA definition, indicating that efforts to implement alternative definitions may struggle to gain traction at the State Department.

Foxman told JI that he is concerned that considering other definitions of antisemitism, as Schakowsky’s letter urges, would “water down” the State Department’s efforts to fight antisemitism and could also lead the range of other governments and private institutions that have adopted the IHRA definition to reconsider doing so.

“Opponents of this definition argue that it would encroach on Americans’ right to freedom of speech,” Deutch wrote. “But this definition was drafted not to regulate free speech or punish people for expressing their beliefs, however hateful they may be. It would not suddenly make it illegal to tweet denial of the Holocaust or go on television accusing Jews of being more loyal to Israel than the United States. But it would identify those views as anti-Semitic.”

Read the full text of the letter here:

We write to thank you and the entire Biden Administration for your commitment to fighting against the rising threat of antisemitism, both globally, and here in the United States. We applaud your prioritization of combatting this ancient hatred. In carrying out this critical work, we urge you to consider multiple definitions of antisemitism, including two new definitions that have been formulated and embraced by the Jewish community.

In 2016, the International Holocaust Remembrance Alliance (IHRA), of which the United States is a member, adopted a non-legally binding definition of antisemitism. The Department of State began using this working definition at this time. In September of 2018, the Trump Administration announced that it was expanding the use of the IHRA definition to the Department of Education. This was followed by the 2019 “White House Executive Order on Combatting Antisemitism” that formally directed federal agencies to consider the IHRA working definition and contemporary examples of antisemitism in enforcing Title VI of the Civil Rights Act.

While the IHRA definition can be informative, in order to most effectively combat antisemitism, we should use all of the best tools at our disposal. Recently, two new definitions have been introduced that can and should be equally considered by the State Department and the entire Administration. The first is the Nexus Document, drafted by the Nexus Task Force, “which examines the issues at the nexus of antisemitism and Israel in American politics.” The Task Force is a project of the Knight Program on Media and Religion at the Annenberg School of Communication and Journalism at USC. The definition is designed as a guide for policymakers and community leaders as they grapple with the complexities at the intersection of Israel and antisemitism.

Another valuable resource is the recently released Jerusalem Declaration on Antisemitism (JDA).  The JDA is a tool to identify, confront and raise awareness about antisemitism as it manifests in countries around the world today. It includes a preamble, definition, and a set of 15 guidelines that provide detailed guidance for those seeking to recognize antisemitism in order to craft responses. It was developed by a group of scholars in the fields of Holocaust history, Jewish studies, and Middle East studies to meet what has become a growing challenge: providing clear guidance to identify and fight antisemitism while protecting free expression.

These two efforts are the work of hundreds of scholars and experts in the fields of antisemitism, Israel and Middle East Policy, and Jewish communal affairs, and have been helpful to us as we grapple with these complex issues. We believe that the Administration should, in addition to the IHRA definition, consider these two important documents as resources to help guide your thinking and actions when addressing issues of combatting antisemitism.

Once again, we thank you and President Biden for prioritizing this important matter and urge you to use all tools at your disposal to combat the threat of antisemitism.