The congressman was grilled on his Middle East policy positions in a meeting with The Chicago Tribune editorial board, according to audio obtained by JI 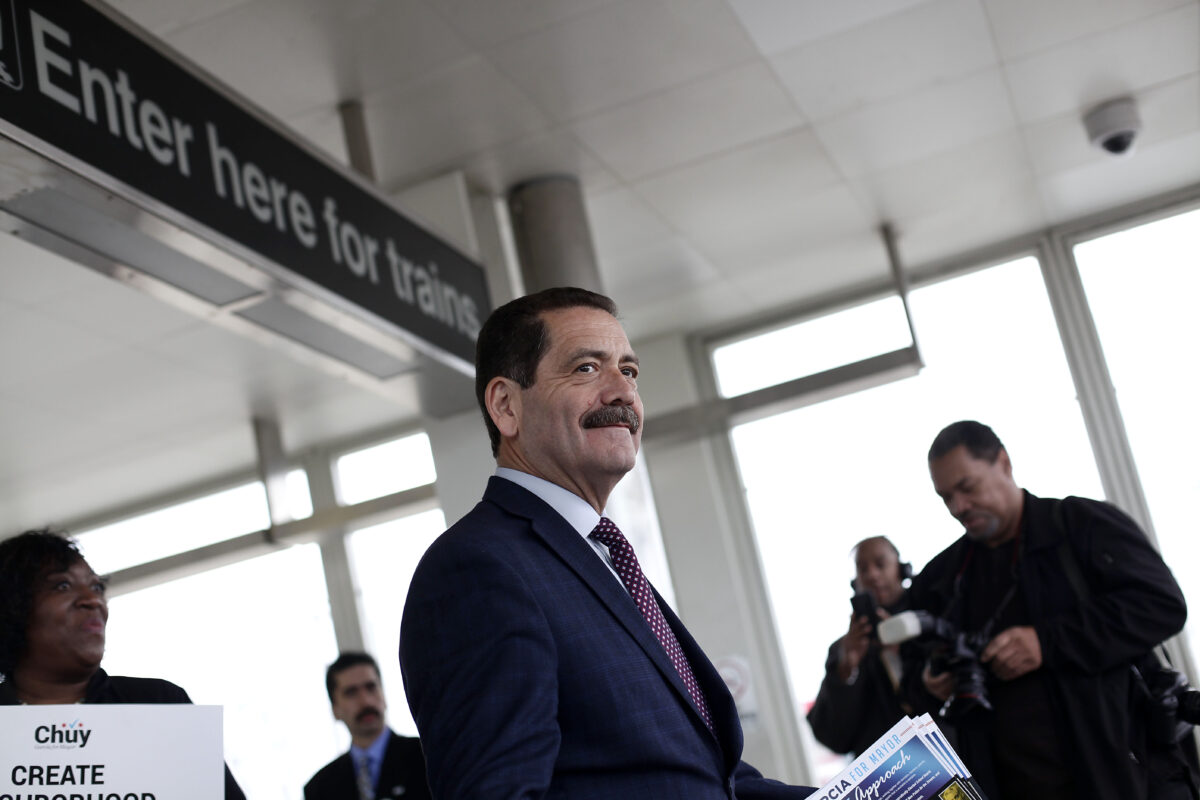 Rep. Jesús “Chuy” García (D-IL), a leading Democratic challenger to Chicago Mayor Lori Lightfoot, faced a tough line of questioning over his congressional record on Israel in a candidate interview with the editorial board of The Chicago Tribune on Monday, according to audio of the exchange obtained by Jewish Insider.

During the 90-minute meeting at the Tribune’s offices, where Lightfoot and another top rival, Cook County Commissioner Brandon Johnson, were also present, the conversation turned to Middle East policy when an interviewer voiced concerns from Jewish community members about García’s approach to Israel, which has on occasion strayed from the Democratic mainstream.

In 2019, for example, García was among just 16 House Democrats who opposed a resolution condemning the Boycott, Divestment and Sanctions movement against Israel. In 2021, the congressman, who frequently aligns with his party’s far-left flank, joined an even smaller minority of eight Democrats who voted against the approval of $1 billion in supplemental aid for Israel’s Iron Dome missile-defense system following the May flare-up of violence between Israel and Hamas in Gaza.

“Some in that community saw your early years in Congress, your alignment with the Squad, various votes that were taken as reflecting squishy support for Israel, and some even perceive that as antisemitic,” the Tribune interviewer told García, noting that “some prominent members” of the Jewish community “have at least tacitly said, given that record, this is not the candidate for Jewish Chicago.”

Asked if he believed that was a “fair assumption,” García, a staunch progressive who served in state and local politics before his election to Congress in 2018, pushed back against such reasoning, arguing that it was “not a fair characterization” and explaining that he has had “relationships and friends and allies in the Jewish community going back almost 50 years.”

The 66-year-old congressman touted, among other things, an award he received “almost 15 years ago” from the Jewish Council on Urban Affairs and pointed to a “close relationship” with a rabbi and congregation at “a synagogue on the Southwest Side of Chicago near Marquette Park,” which he did not name.

“My history with Jews in Chicago is long, is deep, is rich, and they’ve influenced my political thinking,” García went on, citing “allies in politics” such as Rep. Jan Schakowsky (D-IL), a Jewish Democrat from Chicago, “former members” of the city council and elected officials in the Illinois state legislature. “No one of them will tell you that there is any iota of antisemitism or anti-Israel sentiment,” García averred.

The Tribune interviewer followed up by asking the congressman, who is one of eight candidates challenging Lightfoot next month in Chicago’s mayoral election, to directly address some of his past votes relating to Israel.

“I took one vote on Iron Dome against it because it was not part of a regular process,” García said in the interview, echoing criticism from progressives who objected when Rep. Steny Hoyer (D-MD), the former House majority leader, forced a standalone vote after the funding had been removed from a separate bill. “The Iron Dome funding had been approved through the regular order. Steny Hoyer brought it to the floor.”

Elaborating on his thinking, García said he has voted against the National Defense Authorization Act “most of the time” because he believes “the defense budget is bloated,” adding: “That was the sentiment.”

He assured the Tribune editorial board, though, that the omnibus spending package that passed the House “before the year was over” had “included $3.3 billion in military funding for Israel, including full funding for Iron Dome.”

García is also a co-sponsor of legislation, introduced in 2021 by Rep. Betty McCollum (D-MN), that called for placing restrictions on U.S. military aid to Israel.

The congressman made no mention of his opposition to the anti-BDS resolution passed in 2019, but in a statement at the time of the vote, said he objected because it did “not advance the goal of a negotiated peace process” between the Israelis and the Palestinians.

Even before his election to Congress, García had been vocally opposed to such efforts. As a member of the Cook County Board of Commissioners in 2015, he was highly critical of a resolution urging a Chicago pension fund to divest from companies that support boycotts of Israel, saying it was “one-sided” because there had been “no mention of the illegal settlements, the plight of refugees especially in Gaza and many other unilateral and illegal acts that the Israeli government has permitted to be taken by settlers and others.”

Since he entered the House, García has continued to speak out against the Israeli government. In 2020, for instance, he suggested in social media comments that Israel’s planned annexation of parts of the West Bank was “a clear move towards the establishment of an apartheid system.”

In a floor speech two years ago amid mounting violence between Israel and Hamas in Gaza, García suggested that Israeli evictions of Palestinian homes and “the hostilities around Al Aqsa Mosque” in Jerusalem “seem to have provoked the latest escalation in violence,” while  arguing that the U.S. must “take a hard look at how the situation has changed in recent years.”

He called on the Biden administration to “reverse” former President Donald Trump’s “detrimental actions and take steps to ensure that U.S. aid to Israel cannot be used for the seizure or destruction of Palestinian homes.”

A spokesperson for García’s campaign said he was unable to respond to JI before publication of this article.

García was the only candidate to field questions related to Israel during the Tribune interview earlier this week. The newspaper’s own coverage of the meeting, which did not mention the Middle East policy discussion, made clear that there was otherwise no shortage of contentious moments as Lightfoot traded accusations with García and Johnson, who are among the mayor’s most formidable opponents. The rest of the candidates met with the newspaper’s editorial board last week, the publication wrote.

In an email statement to JI, Chris Jones, the Tribune’s editorial page editor, said the board “met with all the mayoral candidates and asked a variety of questions of the candidates.”

“We place a particular importance on issues brought to us by our readers,” he said of the board’s exchange with Garcia on Israel. “Just because we ask a question on a topic does not, of course, imply anything about our own position.”

The editorial board has not yet made an endorsement in the race.

While U.S. mayors traditionally have no direct influence over foreign policy decisions, issues concerning Israel in particular have sometimes factored into local elections, perhaps most notably in New York City, home to the largest Jewish population in the world outside the Jewish state itself.

In Chicago, where there are approximately 320,000 Jewish residents — a sizable and growing number —  it is not wholly surprising that García’s record on Israel has now come under scrutiny, even as he seeks to transition to city government.

During her time as mayor, Lightfoot, who had not previously held elective office, has met on at least two occasions with Yinam Cohen, Israel’s consul general to the Midwest, to promote ties between Israel and Chicago, according to social media posts.

In contrast with her predecessor, Rahm Emanuel — Chicago’s first Jewish mayor, who has long been committed to pro-Israel causes — Lightfoot does not, however, appear to have been particularly outspoken on such issues.

Recent polling suggests that García is a leading contender in the hotly contested race to unseat Lightfoot, who is campaigning for a second term in the Feb. 28 election. The congressman, who won a third House term this past November, previously ran for mayor of Chicago in 2015, losing to Emanuel, the Democratic incumbent, in a runoff. García announced his new mayoral bid days after the midterms.

As the exchange concluded on Monday, the Tribune interviewer asked García to confirm if the congressman had, during their conversation, been “speaking supportively of Israel and its right to exist.”

“Yes, absolutely,” García said, noting that he has “been aligned with” the liberal Israel advocacy group J Street, which has previously endorsed him. “I totally believe in a two-state solution, and the question has never been posed to me before.”