Jerusalem tensions spill over as Hamas and Israel exchange fire 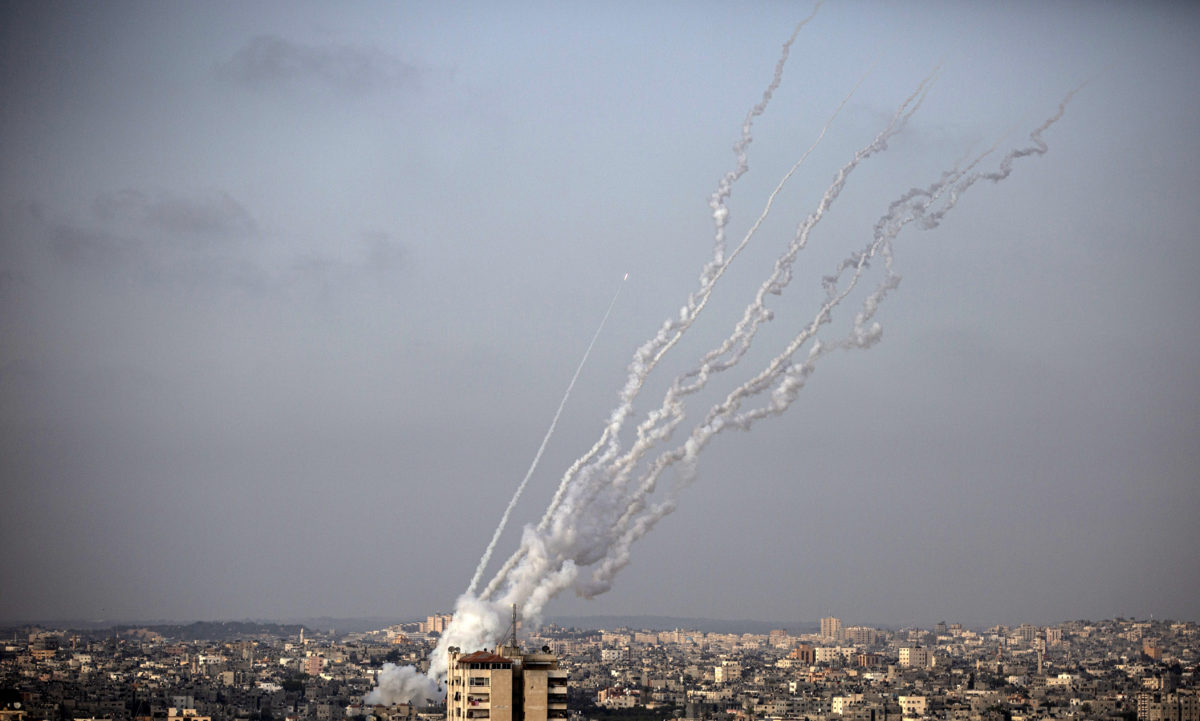 Rockets are launched from the Gaza Strip towards Israel, Monday, May. 10, 2021. (AP Photo/Khalil Hamra)

More than 300 rockets were fired at Israel from Gaza in less than 18 hours, including the first missiles aimed at Jerusalem since the 2014 war.

Jerusalem burns: Monday, which marked Jerusalem Day, kicked off with violent clashes atop the Temple Mount between Palestinian worshipers and Israeli police officers. Tensions in the city have been high for weeks over the now-delayed legal ruling on the potential eviction of dozens of Palestinians from the Sheikh Jarrah neighborhood of Jerusalem. Palestinians threw rocks at police outside al-Aqsa Mosque and police responded with rubber-tipped bullets and stun grenades. Hundreds of Palestinians were wounded and more than 20 police officers were hurt. As the clashes raged, Palestinians threw rocks at a passenger vehicle just outside the Old City, causing it to crash into some of the gathered crowd, which then attacked the driver. Later, Palestinians threw fireworks at a muted Jerusalem Day celebration at the Western Wall, resulting in a tree atop the Temple Mount catching fire.

Rockets fly: As tensions seethed across Jerusalem yesterday and threatened to spill over in protests around the country, Hamas issued a warning to Israel: Withdraw all forces from the Temple Mount and Sheikh Jarrah by 6 p.m. Shortly after the deadline, a barrage of seven rockets from Gaza was fired toward Jerusalem. Hamas and Palestinian Islamic Jihad continued to fire rockets at southern Israel throughout the night and this morning, including a heavy barrage at Ashdod that hit an apartment building this afternoon. A rocket that hit a home in Ashkelon early this morning wounded at least six people, one seriously, and school was canceled for students across most of southern Israel today. The IDF continued a steady stream of air strikes on Hamas sites in Gaza in response. According to the Gaza Health Ministry, 25 Palestinians have been killed, including at least nine children and more than a dozen Hamas operatives.

Spilling over: Violent protests among some Israeli Arabs raged in cities across Israel last night as tensions escalated. In Lod, Ramle, Haifa, Nazareth and other towns, Israeli Arabs clashed with police and on some occasions with Jewish counter-protesters, and dozens were arrested. In Lod, an Israeli-Arab man was shot dead during a protest last night and two others were wounded. Two Jewish suspects from the city were arrested on suspicion of being involved in the shooting. Defense Minister Benny Gantz approved calling up 5,000 reservists to the IDF to boost the military presence on the Gaza border and throughout the West Bank.

Political pause: Ra’am chief Mansour Abbas halted all coalition negotiations yesterday amid the violence, putting a hold on Opposition Leader Yair Lapid’s plans to announce a government as early as this week. Analysts suggested the speed bump is indicative of the larger problems that could face such a government in the future. “The rioting in Jerusalem and the rockets from Gaza only serve to highlight the shaky grounds on which the alternative, Netanyahu-free government would be built,” wrote Lahav Harkov in The Jerusalem Post. Former Israeli Ambassador to the U.S. Michael Oren told JI on Sunday that “if the Arab parties are supporting riots in Jerusalem in which policemen are getting seriously hurt, it’s going to be really hard for someone like Naftali Bennett to cooperate with them in a government… It also indicates the problematic effect of, everytime we’re going to have some kind of security issue with the Arabs, the government is liable to fall.”

World reacts: Secretary of State Tony Blinken said yesterday that the U.S. is “very deeply concerned about the rocket attacks that we are seeing now, that need to stop, and need to stop immediately.” He also expressed concerns about “provocative actions” on the Temple Mount and said “all sides need to de-escalate and reduce tensions.” The U.N. Security Council weighed issuing a statement expressing “grave concern” over tensions and calling on Israel to halt any evictions, but the U.S. reportedly held up a formal statement. U.K. Foreign Secretary Dominic Raab condemned “the firing of rockets at Jerusalem and locations within Israel” and called for “an immediate de-escalation on all sides.” Thousands protested in Jordan against Israel yesterday, and Turkey and Egypt issued condemnations of Israeli actions.

Weighing in: Sen. Chris Murphy (D-CT), who leads the Senate Foreign Relations Committee subcommittee that oversees the Middle East, called on leaders on both sides to “commit to a path of de-escalation” during a call with reporters on Monday. “This constant ratcheting up of violence may serve political interests, but it could lead to chaos that is ultimately going to get a lot of people killed,” Murphy continued. “Hamas needs to stop rocket attacks but Israel needs to stop the forcible eviction of Palestinians from their homes.” During the call, Murphy also weighed in on prospects for broader peace and the Iran nuclear negotiations. Read more here.

Capitol reactions: Sen. Chris Coons (D-DE) called for a de-escalation of tensions and condemned the “ongoing violence” in Jerusalem, singling out “Hamas’ recent attacks on the holy city.” In a follow-up tweet, he voiced concern over “evictions in East Jerusalem, settlement expansion, and home demolitions,” which he called “unilateral actions that place a two-state solution further out of reach.” Rep. Ritchie Torres (D-NY) posted that the latest rocket fire “underscores the need for missile defense programs, such as Iron Dome, which protects Israeli civilians — both Arabs and Jews.” Rep. Michael McCaul (R-TX), the ranking Republican on the House Foreign Affairs Committee, called for “calm for all in Jerusalem” while reiterating that the U.S. “stands by our ally Israel.” Rep. Ilhan Omar (D-MN) tweeted that “Palestinians deserve protection. Unlike Israel, missile defense programs, such as Iron Dome, don’t exist to protect Palestinian civilians.”