Small cadre of Republicans speaks out against Trump after Capitol riots

Former California Gov. Arnold Schwarzenegger compares the riots at the Capitol to Kristallnacht 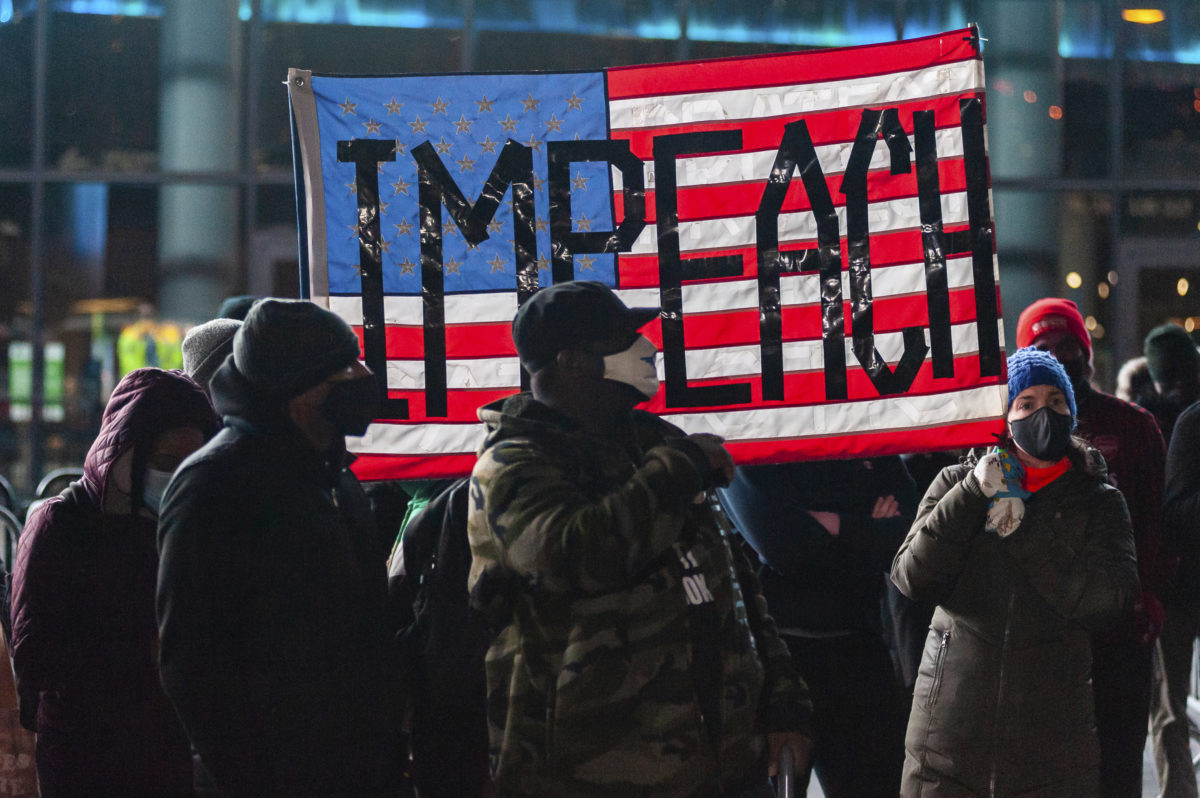 Protesters call for President Donald Trump's removal from office at a demonstration outside the Barclays Center in Brooklyn, New York, on January 7, 2020.

Schwarzenegger, a longtime critic of the president, tweeted a video Sunday morning comparing the insurrection at the Capitol to Kristallnacht.

“Wednesday was the day of broken glass right here in the United States,” Schwarzenegger said during the seven-minute video. “But the mob did not just shatter the windows of the Capitol. They shattered the ideas we took for granted… They trampled the very principles on which our country was founded.”

Schwarzenegger, who grew up in post-war Austria, also discussed his childhood, “surrounded by broken men drinking away their guilt over their participation in the most evil regime in history.”

The former governor shared, for the first time, that his father verbally and physically abused his family while drunk, sometimes multiple times per week, adding that such domestic violence was common throughout his community.

“They were in physical pain from the shrapnel in their bodies, and in emotional pain from what they saw or did. It all started with lies, and lies and lies and intolerance,” he said. “I don’t believe that [something like this could happen here] but I do believe that we must be aware of the dire consequences of selfishness and cynicism.”

“[President Trump] sought a coup by misleading people with lies,” Schwarzenegger added. “My father and our neighbors were misled also with lies, and I know where such lies lead.”

Some House Republicans also distanced themselves from the president over the weekend. Rep. Nancy Mace (R-SC), a first-term Republican who flipped her district in November, told South Carolina’s The State that she no longer supports the president.

“I can’t condone the rhetoric from yesterday, where people died and all the violence. These were not protests. This was anarchy,” said Mace, who briefly served as a campaign staffer during Trump’s 2016 campaign but opposed efforts to challenge the 2020 results.

“My anger not only stems from the violence last night, where four people died and people were injured, but everything [Trump] accomplished during the last four years of his presidency. That legacy has now been wiped out. It is gone, and we have to start over from scratch,” Mace added. “We now have lost the Senate. We did that on our own accord. We did it to ourselves, and we reap what we sow. The rhetoric has got to stop… That is one of the main reasons that we lost people within our party.”

Mace, who barricaded herself inside her office during the riot, added that she was afraid to return to her hotel Wednesday night, out of concern that pro-Trump demonstrators staying there might attack her for voting against the election challenges.

Fellow first-term Republican Rep. Peter Meijer echoed Mace’s concerns about violent retribution from Trump supporters, suggesting that some of his GOP colleagues supported the election challenges out of concern over their personal safety.

“My colleague told me that efforts to overturn the election were wrong, and that voting to certify was a constitutional duty. But my colleague feared for family members, and the danger the vote would put them in. Profoundly shaken, my colleague voted to overturn,” Meijer wrote in an op-ed for The Detroit News. “An angry mob succeeded in threatening at least one member of Congress from performing what that member understood was a constitutional responsibility.”

Meijer excoriated Republican colleagues who stuck by claims of election fraud even after he and others were forced to flee the House chamber when protesters breached the building and a rioter was shot and killed just outside the House floor.

“Worse yet, while a dead woman’s blood dried mere feet from our chamber, other Republican colleagues doubled down, repeating lies of a stolen election, baselessly deflecting blame for the Capitol assault from Trump loyalists to Antifa, doing whatever they could to justify, equivocate, rationalize or otherwise avoid taking responsibility for the consequences of their actions,” Meijer wrote.

In a separate interview with Reason magazine, Meijer further criticized his colleagues, saying that they and Trump shared responsibility for Wednesday’s events by telling supporters that the election had been stolen.

“I don’t understand how you can look in the mirror and go to sleep at night without that weighing on your conscience, I fundamentally do not,” Meijer said. “I’m just at a loss for words about how some of them have acted in ways that are just knowingly, provably false. And they know they’re lying too.”

Meijer did not rule out the option of voting to impeach Trump, describing the president to Reason as “rankly unfit” to serve out his term.

Schwarzenegger, Mace and Meijer join a small group of prominent Republicans who have denounced the president, including Reps. Adam Kinzinger (R-IL) and Steve Stivers (R-OH) and Sen. Lisa Murkowski (R-AK), who called for the president’s resignation on Friday.

On Monday, House Democrats are planning to bring forward a resolution calling on Vice President Mike Pence and the Cabinet to remove Trump from office under the 25th Amendment. The measure will likely require a full floor vote on Tuesday. Under the terms of the legislation, the House will move to impeach Trump if Pence does not respond within 24 hours

Last week’s events have also raised concerns and debate within the Orthodox Jewish community, segments of which have been supportive of the president.

A pair of synagogues in Nassau County’s Five Towns admonished the Five Towns Jewish Times, a local newspaper, for publishing a front-page photo of one of its columnists standing, arms outstretched with a broad smile, in front of the Capitol as it was being overrun by rioters last week. The congregations requested that 5TJT cease delivery to their synagogues.

“Your glorification of an act that we all find abhorrent and against Jewish values, morals and ethical conduct requires an immediate repudiation. You are perpetuating a tremendous chilul Hashem,” Young Israel of Woodmere board president Stuart Wagner wrote to 5TJT’s publisher. “Until you undertake to address this situation and issue a clear apology to the community, your newspaper is no longer welcome at the Young Israel of Woodmere.”