Meet the four candidates vying to represent one of L.A.’s Jewish hubs

The candidates in the race to represent L.A.’s District 5 on the city council offer similar policy proposals, but differing qualifications 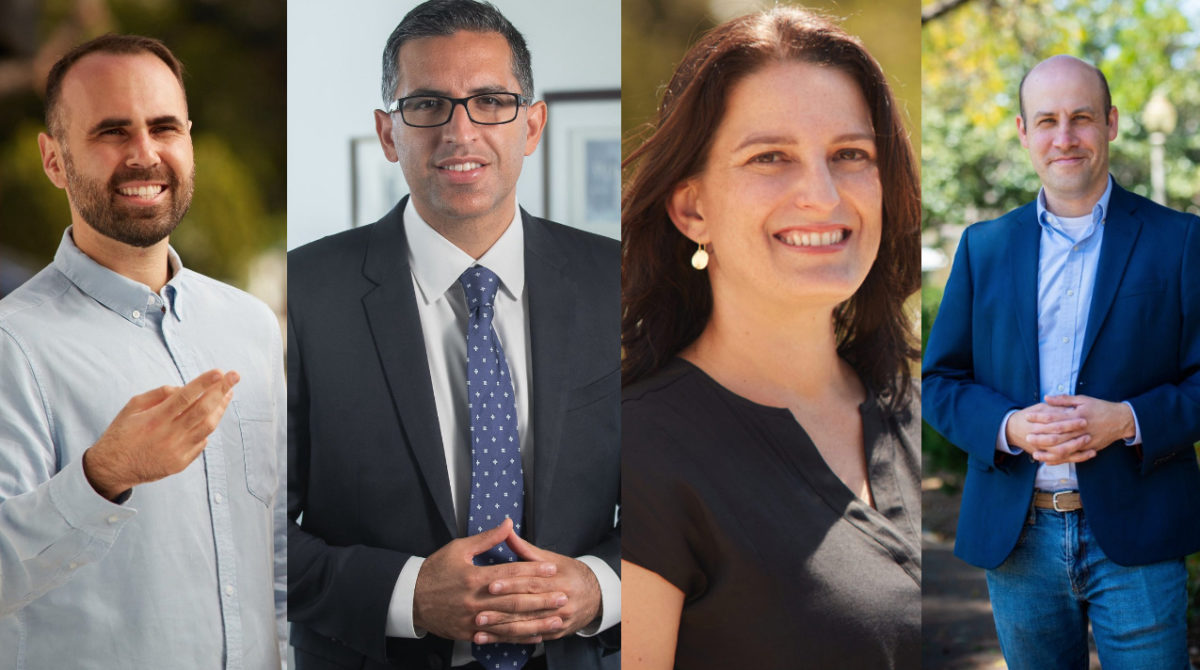 Rampant homelessness. Unsafe streets. The specter of climate change’s harrowing effects. These are the front-burner local issues that motivated Los Angeles voters in the run-up to Tuesday’s primary.

In the race for L.A.’s Council District 5 — which contains a large Jewish population and comprises the historic Jewish neighborhoods of Pico-Robertson and Fairfax — four Jewish candidates are vying for the Westside seat currently held by Paul Koretz, who is running for city controller. Whoever wins the election will be one of 15 elected officials on the legislative body of the nation’s second-largest city, and will have to contend with a homelessness crisis affecting an estimated 66,000 people, homicide rates on pace to set a 16-year high and the continuing effects of climate change, which have caused heat waves and fires in the city.

With California’s “jungle primary” system, the top two vote-getters could face off again in the November general election. Financial disclosure records from last month show Yebri has raised $807,000 and Young Yaroslavsky $585,000. Biblarz and Epstein have pulled in $177,000 and $70,000, respectively.

Yebri came to the U.S. as a refugee from Iran and would be the first Iranian-American elected official in L.A.’s history.

“My parents impressed on me the importance of working hard and studying hard, and I took advantage of every opportunity available,” Yebri, who lived with his family in a one-bedroom apartment after moving to California, told JI. “We’ve really lived the American dream, as a family and [in the] broader Iranian-American, Iranian-Jewish community.”

Yebri, who went on to graduate from Yale, has sought to straddle those two identities — Iranian-American and Iranian-Jewish — in his life and career. In 2009 he helped found 30 Years After, a nonprofit promoting civic engagement among the Iranian-Jewish community in America, which began as an event to mark the 30th anniversary of the Iranian Revolution.

Yebri also founded his own law firm, worked at Bet Tzedek legal services, a Jewish group providing legal services to those in need, and sits on the board of the Anti-Defamation League, where he spent time as a college intern and which he supported as a young lawyer by helping writing amicus briefs on relevant litigation.

As chairman of the Jewish Community Foundation of Los Angeles’ COVID Relief Grants Committee, he dispensed $8 million in relief funding to L.A. nonprofits.

“I grew up with stories of how precarious the Jewish experience was in Iran, how close my grandparents were to a similar fate, and how all Jews are bound by history, by blood, and by shared destiny,” he explained about his work representing Holocaust survivors. “For me it felt like an opportunity to meet and help a long-lost cousin.”

“I’m running because the city that I love, that enabled my immigrant family to live the American dream, where I’m raising four young kids and started a business, is in decline,” said Yebri. “The same career politicians are unable and unwilling to exercise the leadership that we need.”

Katy Young Yaroslavsky, who received the Los Angeles Times’ endorsement in the race, grew up in L.A. in a political home, where her mother managed a local lawmaker’s district office. After attending law school and a stint working at a law firm, Young Yaroslavsky found her way to public service, focusing on environmental issues.

“I remember being a college student, or maybe just after college, when climate change really started coming to the fore as a topic of concern,” Young Yaroslavsky told JI. “You know, Al Gore put out ‘An Inconvenient Truth’ and I remember being horrified, and mostly horrified that people didn’t seem to be taking it seriously.”

If elected, “councilmember” would be one line on a long resume for Young Yaroslavsky, whose career has spanned both government and nonprofit work. Young Yaroslavsky was appointed to the County Board of Supervisors, where she worked for four years and helped develop and implement Measure W, a $300 million-a-year clean-water infrastructure initiative; helped create L.A. County’s Office of Sustainability; and helped implement the L.A. County Cultural Equity and Inclusion Initiative, which works to ensure equal access to the arts.

Before working for the county, Young Yaroslavsky was general counsel and director of government affairs at Climate Action Reserve, a nonprofit aiming to reduce greenhouse gas emissions.

“When I was initially drawn to public service work, I wasn’t really thinking about how it tied in with my Jewish faith, but they’re closely connected, and I’ve learned mostly from my mom how important it was to find meaning in your work,” said Young Yaroslavsky. She added that the feeling of being excited about your job and “doing good” is a “profoundly Jewish value.”

Young Yaroslavsky touts her long record in government service as her distinguishing feature in the council race. Explaining why voters should support her candidacy, Young Yaroslavsky said that she knows where money is located across municipal, county, state and federal levels of government, and she has experience collaborating and getting results.

“I think the last thing we need in this job is people who aren’t naturally collaborative and who grandstand,” she shared. “We need adults in the room who want to work together.”

Biblarz grew up in what he called “the heart of Jewish L.A.,” in a small duplex apartment, from which his family was evicted when he was 12. Growing up with parents who fell victim to substance abuse, and grappling with his gay identity at a time when gay marriage was not yet legal, drew Biblarz to politics.

“When we were evicted I was told, and I remember feeling, even then at such a young age, there has to be a better way to do this, around something as sensitive as people’s housing,” he said, explaining what drew him to his eventual career interest — the study of inequality.

The issue — which many observers believe is the root of L.A.’s homelessness problem, making the city home to 20% of the country’s unhoused population — has consumed Biblarz’s time for the past several years. Inequality was the focus of his graduate study at Harvard, where he pursued a law degree and doctorate after receiving his bachelor’s there in 2014, and was his impetus for entering the race.

Biblarz, who currently lectures at UCLA’s law school, can explain the city’s homelessness crisis quite simply with two hands. One hand he holds flat — it represents real wages over the past 40 years. The other hand is slanted and signifies the cost of housing. The widening gulf explains the city’s homelessness crisis, and Biblarz is convinced his academic background devoted to the issue makes him the best fit to try to solve it on the council.

Scott Epstein brings a different perspective to the race.

“I’m a policy analyst by trade,” Epstein says about his background, and explains he served on his neighborhood’s council, where he helped bring in millions of dollars into the community, and founded Midtown Los Angeles Homeless Coalition, a nonprofit dedicated to tackling the homelessness crisis.

“At the neighborhood level, I’ve been able to create kind of a hub of progress, bringing a lot of new people into the process, and in doing so, get results,” he told JI, referencing his work on the neighborhood council, where he helped create the only new homeless shelter in the entire council district.

“I think we need a bolder change, and that’s a big piece of why I’m running,” he said.

In interviews with JI, all four candidates stressed the importance of combating hate crimes, a particularly salient issue both for the district’s large Jewish and Asian communities, and called for empowering police to investigate hate crimes.

In addition, all four are opposed to the Boycott, Divestment and Sanctions (BDS) movement, the global effort that seeks to target and isolate Israel. The LA Teachers Union toyed with supporting BDS last year, and the state has been ground zero for debates over ethnic studies curricula, with some educators pushing lesson plans that promote the movement.

“I don’t think saying that everybody that has real grievances around Israel’s policy is an antisemite is true or wise,” Epstein said. “I think we need to be very careful around resolutions in any direction around the BDS movement, and I would be very careful in what I would support in that realm.”

The other candidates struck a more unequivocal tone on the issue.

“Part of my job on the council will be to continue to speak out against BDS, and calling it out when I see it,” said Young Yaroslavsky. “There’s the bully pulpit, there’s resolutions, there’s things like that, there’s also education and talking to people.”