After a months-long advocacy campaign, members of the Los Angeles Jewish community are ‘cautiously optimistic’ about the outcome of tonight’s vote 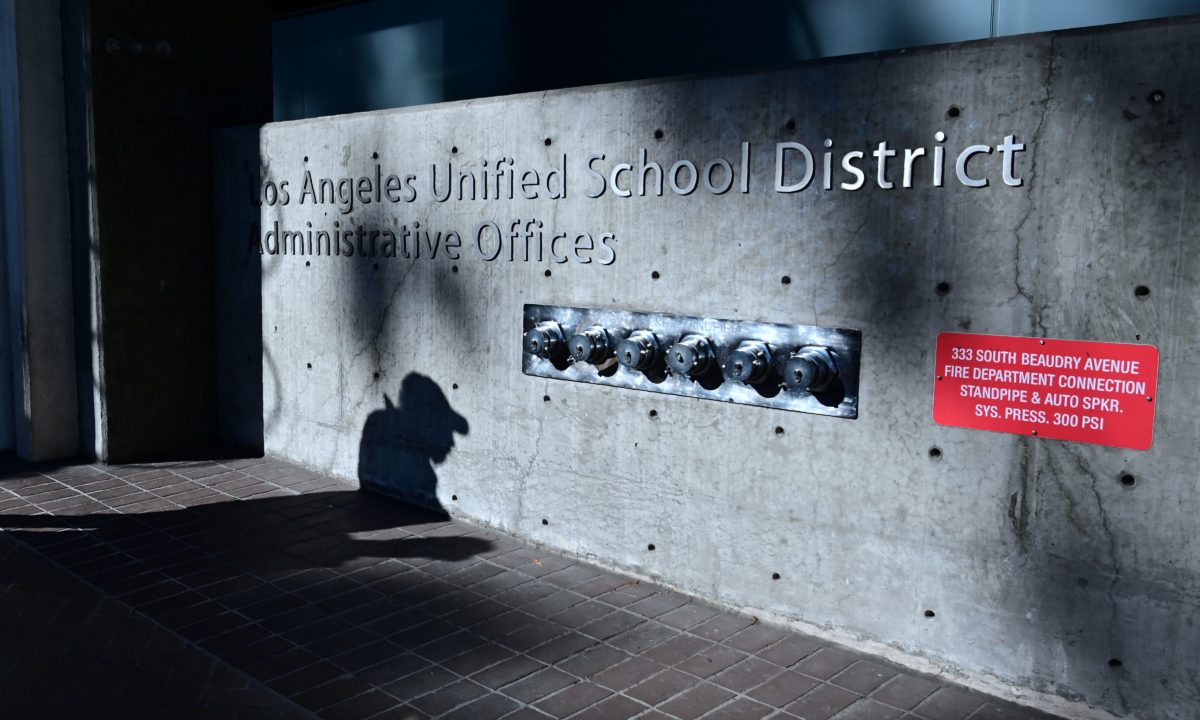 United Teachers Los Angeles (UTLA), the country’s second-largest teachers union, will consider a resolution supporting the Boycott, Divestment and Sanctions movement against Israel at its September meeting tonight, the third time in two weeks that an anti-Israel resolution is being considered in a large city, following failed attempts in the city councils of Seattle and Burlington, Vt.

UTLA represents some 32,000 public school employees in a district that “educates more kids than there are people in Vermont,” said Nick Melvoin, the vice president of the Los Angeles Unified School District’s Board of Education and one of just a handful of L.A.-area public officials to condemn the resolution. While the text does not explicitly call for any curriculum changes in how the Israeli-Palestinian conflict is taught in schools, its passage, opponents say, could still have implications for the more than 600,000 students educated in the city’s public schools. Los Angeles has the second-largest Jewish community in the United States.

“This proposed anti-Israel motion would alienate and create an unwelcome environment — if not worse — for Israeli Americans and many other Jewish Americans,” said Dan Gold, vice president of community engagement at the Jewish Federation of Greater Los Angeles. The L.A. federation has led a group of local Jewish organizations, including branches of the American Jewish Committee and the Anti-Defamation League, in advocating against the resolution.

The resolution first came up in May at several UTLA “Area Meetings” — the union has eight official “areas,” or local chapters — following the conflict between Israel and Hamas and the controversy over planned evictions of Palestinians in East Jerusalem. Four UTLA Area Meetings passed a resolution “​​express[ing] our solidarity with the Palestinian people,” endorsing BDS and calling for an end to U.S. aid to Israel.

Tonight, the resolution will come before UTLA’s 250-member House of Representatives, the union’s official policy-making body.

Members of the pro-Israel community in L.A. say that the four months between the introduction of the resolution and tonight’s meeting allowed a full-court advocacy press that could make a difference in whether the measure is approved.

“I’m cautiously optimistic that there’s been enough organization that [the resolution] is going to lose when it comes before the House. It was a small minority who brought this thing up,” said Gregg Solkovits, a longtime UTLA member who previously served as the organization’s secondary vice president, overseeing secondary schools throughout the district. Solkovits is also the president of a local political group called Democrats for Israel – Los Angeles.

UTLA’s process stands in contrast to a resolution passed quickly in May by the United Educators of San Francisco, a large Bay Area teachers union that became the first in the country to endorse the BDS campaign. The San Francisco union allowed little time for dissent or discussion.

“I look to the San Francisco teachers union as the example of what we have tried to avoid here in L.A.,” said Richard Hirschhaut, regional director of AJC Los Angeles. “Having time to mobilize has mattered to be able to bear out the folly and foolishness of this misguided measure, and to be able to enlist both teachers within UTLA, as well as parents of LAUSD students.”

The first positive sign for the resolution’s opponents came in late July, when UTLA’s Board of Directors — another leadership body in the union’s byzantine bureaucratic structure, akin to the Cabinet of the executive branch — recommended indefinitely postponing a vote on the BDS resolution.

The board’s substitute motion is expected to be introduced Thursday night, and if it passes, then the BDS resolution will not come to a vote. The substitute motion recommends organizing voluntary forums for union members to gather and discuss the Middle East.

The coalition of pro-Israel Jewish organizations that worked together to fight this resolution had two years of experience on another controversial public education issue: the heated statewide debate around California’s model ethnic studies curriculum, early drafts of which did not teach about antisemitism and included praise of the BDS movement. The Jewish Public Affairs Committee of California (JPAC), the coalition led by the L.A. federation, claimed victory when the final draft of the curriculum — approved by the state’s board of education — included lesson plans on antisemitism and diversity in the American Jewish community.

Some members of the Jewish community who worked to improve the state’s ethnic studies curriculum view the UTLA BDS resolution as an extension of the themes that appeared in the controversial first draft.

“This was actually what was undergirding a lot of the criticism of ethnic studies, that in the first draft of the state model curriculum, antisemitism was not listed as a form of prejudice and bigotry, even though it remains the most reported hate crime in California,” Melvoin explained. That original curriculum did highlight racism, Islamophobia and other forms of hate.

“I think the frustration I’ve had is twofold: One, that people won’t speak up against the teachers union. But two is just that — and this is not unique to L.A. in this context — but there is a reticence to speak out on antisemitism and anti-Israel issues in a way that there’s not on others,” added Melvoin.

Melvoin has been joined by a handful of Jewish public servants in criticizing the UTLA measure. Scott Schmerelson, another member of the LAUSD Board of Education, has been involved with the federation’s advocacy efforts, although he has not released a public statement about the resolution.

The two make a notable political pairing — Melvoin is known for being a supporter of charter schools, while Schmerelson usually takes the side of the union, which generally opposes opening new charter schools. (The union is independent from the Board of Education, so Melvoin and Schmerelson will not vote on the resolution.)

The resolution “speaks to, I think, a real fundamental misunderstanding and ignorance of what the State of Israel is, in fact, about,” L.A. City Controller Ron Galperin told JI. “The State of Israel is a place of tremendous diversity of races, of ethnicities, of backgrounds, of national origins, of politics [and] of religions.”

California State Assemblymember Jesse Gabriel, who chairs the California Jewish Caucus and represents a heavily Jewish district, praised the work of the coalition that has been fighting the resolution. “The teachers and students and community members have done a good job of helping people to understand the way that this makes Jewish students and Jewish members of the community feel attacked and feel targeted,” he told JI.

This is not the first time UTLA has weighed in on foreign policy issues; it was an early backer of the South African anti-apartheid movement. But the new resolution is also not the first time Israel has come before the body: In October 2006, UTLA denied a union-affiliated committee’s request to meet at the group’s headquarters to discuss boycotting Israel.

While many members of the Jewish community have urged UTLA to avoid taking a one-sided approach to this issue, they do not want schools in Los Angeles to refrain entirely from teaching about Israel or the Israeli-Palestinian conflict. The L.A. federation has a large program devoted to bringing the city’s teachers (at both public and private schools) to Israel on the condition that they then teach about Israel when they return.

“We’re the only community that’s consistently taken delegations of high school teachers to Israel,” said Gold, who coordinates the trips, which have run for nearly two decades. “We didn’t do it sitting around, waiting for there to be a crisis … but it’s proven to have put us in a good position to not only respond, but also be a leading voice and a leading partner for all teachers to better promote Israel [and] to be fair about teaching about Israel and Jewish Americans.”

These lessons are diverse, ranging from reading Israeli novels in translation in high school Spanish classes to studying the differences between the Israeli and American declarations of independence in civics classes.

The teachers do not need permission to participate in the trips, but administrators do need to sign off on the Israel curricula. Gold said the program has not faced pushback from administrators, nor have there been any concerted attempts to shut it down from other teachers.

“When we first heard about these motions being approved and being introduced to be voted on, we called our teachers that we’ve gone to Israel with, and we said, ‘What’s going on here? What do we know? Who’s involved with the union?’ And that really put us in a position to talk to more teachers,” Gold noted.

Last spring, the federation arranged a Zoom call for union members who were concerned about the measure and helped draft a letter urging the UTLA House of Representatives to reject the resolution.

“We cannot allow any group of students to feel that their teachers are collectively poised against them,” said the letter, which appeals to the moral values of union educators. “The anti-Israel movement opposes virtually all forms of cooperation and dialogue, something that is antithetical to our values as a union.” The letter has been signed by more than 1,000 union members.

A small number of Jewish UTLA members have already left the organization in protest, with more threatening to do so if the resolution passes. But the Jewish activists fighting the resolution caution against that strategy, arguing that Jewish teachers are able to make their voices heard because of their strong representation within the union.

“I think the more that we can be part of these institutions, regardless of how flawed they are, the better we are,” said Gold. “I think power comes from within, and we’re trying to help support the Jewish members that are working on that.”

Solkovits, who has been a member of UTLA for more than 30 years, cautions that a wave of pro-Israel teachers leaving the union could have unintended consequences. Instead, he urges them to get involved in union elections, which usually have just a small minority of teachers voting.

“If I really felt that the vast majority of members wanted us to be pro-BDS, I’d be sad, but I could roll with it,” Solkovits added. “But I think this is a minority position brought forward by people who thought to take advantage of people’s apathy at the end of the school year.”