During the address to a joint session of Congress, Biden defended his decision to withdraw troops from Afghanistan 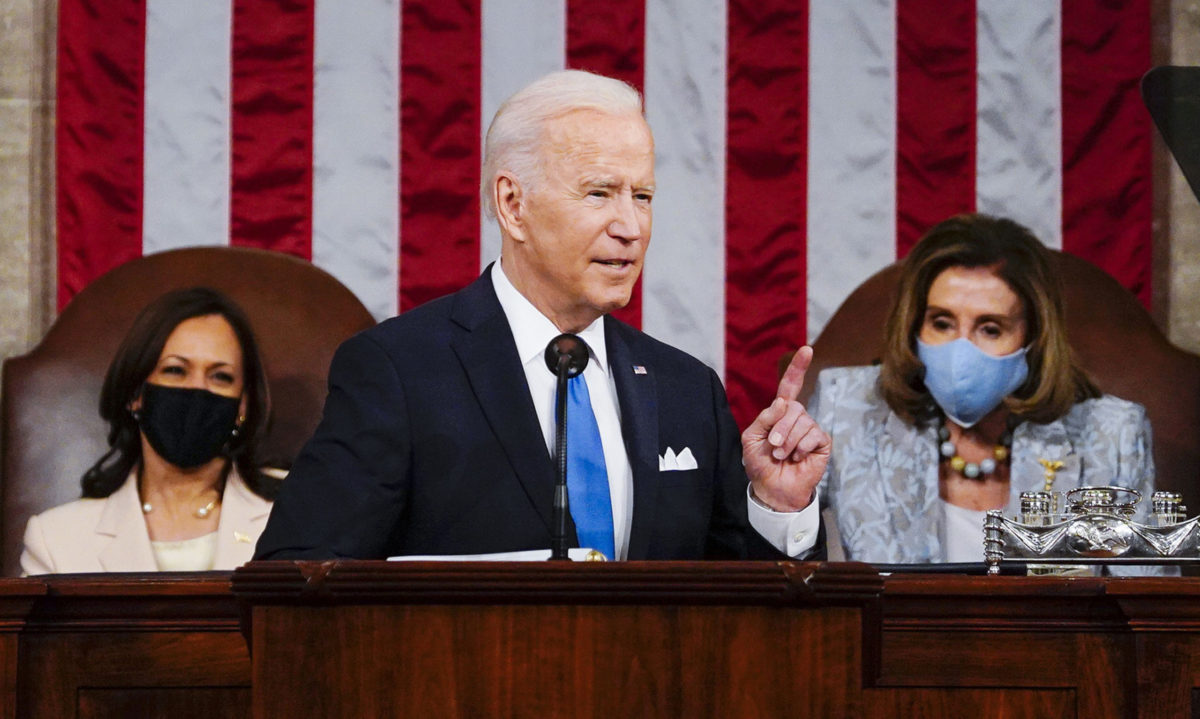 President Joe Biden addresses a joint session of Congress, Wednesday, April 28, 2021, in the House Chamber at the U.S. Capitol in Washington, as Vice President Kamala Harris, left, and House Speaker Nancy Pelosi of Calif., look on.

In a speech to a mostly empty House of Representatives chamber, President Joe Biden spoke at length about what he sees as his accomplishments in the first 100 days of his administration and elaborated on his goals and initiatives for the coming year.

Biden’s speech largely focused on his signature proposals — the American Jobs Plan, the American Families Plan and coronavirus relief efforts — but touched on a broad range of issues facing the nation.

In particular, the president highlighted white nationalist terrorism as the most pressing security threat to American citizens. Biden, defending his decision to withdraw troops from Afghanistan, said that the threat of terrorism has evolved.

“We won’t ignore what our own intelligence agencies have determined — the most lethal terrorist threat to the homeland today is from white supremacist terrorism,” Biden said. “White supremacy is terrorism and we will not ignore that.”

Biden’s speech only mentioned Iran once, in passing, as his administration’s efforts to reenter the 2015 nuclear deal remain ongoing.

“On Iran and North Korea’s nuclear programs that present a serious threat to America’s security and world security — we will be working closely with our allies to address the threats posed by both of these countries through diplomacy and stern deterrence,” Biden said.

Immediate reactions to the speech were predictably partisan: Democratic lawmakers largely praised Biden’s address and his initiatives, while Republicans were generally critical of the president’s sweeping plans for federal spending.

One notable exception was freshman Sen. Mark Kelly (D-AZ), who expressed concerns about Biden’s immigration policies. Arizona — a swing state — is on the frontlines of the ongoing migrant surge at the border, and Kelly faces reelection in 2022.

“While I share President Biden’s urgency in fixing our broken immigration system, what I didn’t hear tonight was a plan to address the immediate crisis at the border, and I will continue holding this administration accountable,” Kelly said in a statement.

“The bottom line is he has to be able to pay for it, we have to look at the payfors,” Manchin said.

Sen. Tim Scott (R-SC), who Republicans selected to deliver the GOP’s response to Biden, grabbed attention for pushing back on Biden’s characterizations of racial issues and divides within the U.S., and closed his remarks by reciting a blessing from Numbers 6:25. Scott said the prayer had “really helped me through this past year of COVID.”

Reactions from the Jewish community touched on a range of subjects from the speech.

“We were thrilled that President Biden prioritized the COVID-19 Hate Crime Act, which included the NO HATE Act as part of addressing the increase of hate-motivated attacks and we hope that the House passes this legislation soon,” Elana Broitman, the Jewish Federations of North America’s senior vice president for public affairs, told JI after the speech. “And, of course, the emphasis on infrastructure should include funding for the social service sector which the Jewish community has heavily invested in over the years.”

“Judaism teaches that safeguarding economic stability and supporting those in need are fundamental obligations of tzedek, or justice,” Pesner said in a statement. “We welcome the significant investments proposed in the American Families Plan to address the scourge of economic inequality and uplift millions of poor and middle-class Americans — especially People of Color, who experience disproportionate obstacles to prosperity due to systemic racism embedded in our nation for generations.”

Wednesday’s joint session address was like no other in recent memory. The chamber, usually filled with members of Congress, their families and cabinet members, was largely empty, with most seats blocked off for social distancing. The Capitol Building also remains ringed by a security fence and National Guard troops, a reminder of the violent insurrection during the last joint session of Congress, on January 6.

After the speech, Malliotakis was spotted chatting with Biden on the floor, and handing him a business card. Portman was also seen talking to Biden following the speech, as was Rep. Troy Nehls (R-TX) — a former sheriff — who said he wanted to work with Biden on police reform issues.