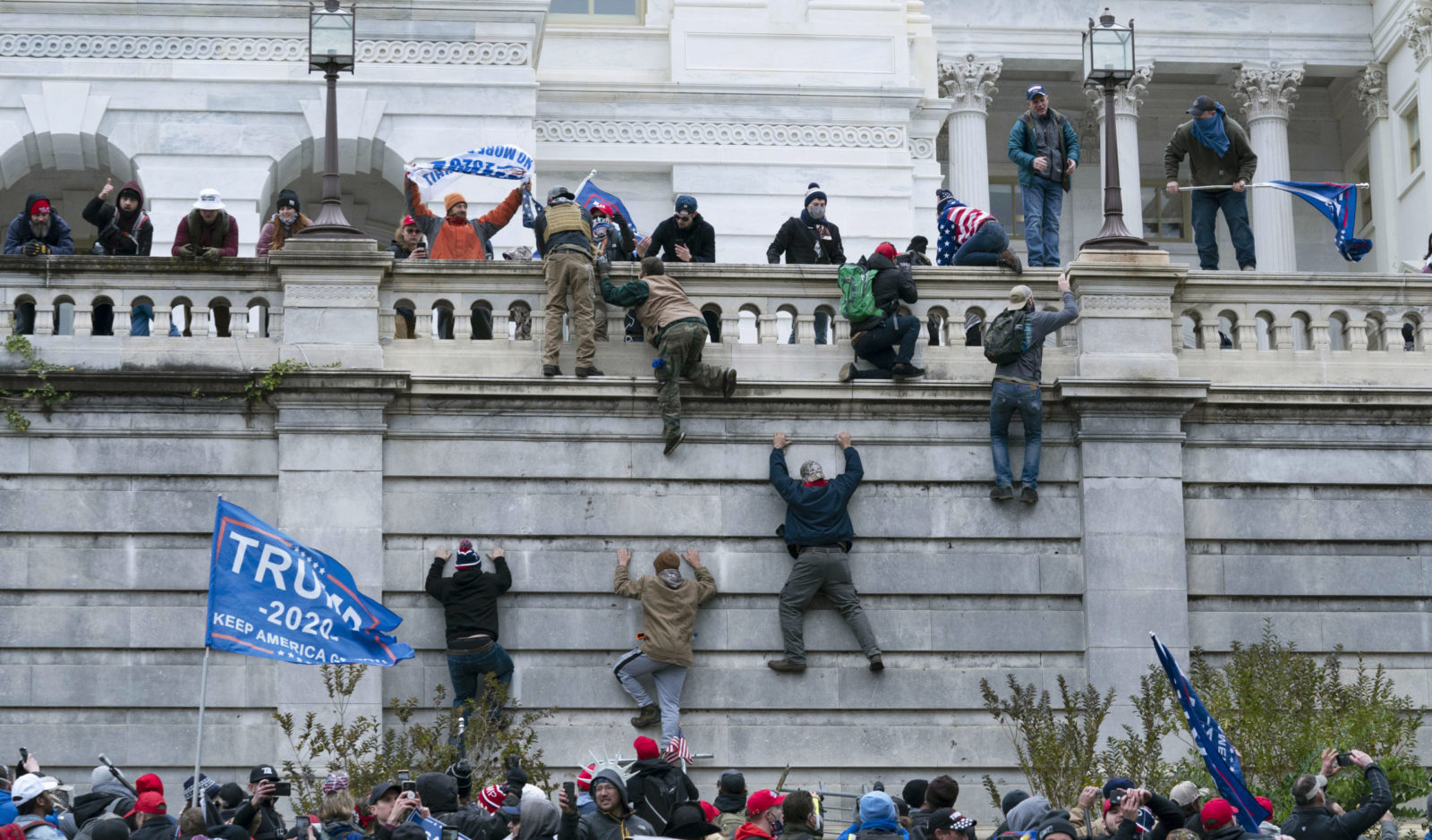 Reporting in the Capitol under siege

What began as a fairly average day in Washington devolved into an unprecedented assault on the Capitol by U.S. citizens.

I headed to the Capitol complex early Wednesday morning, out of concern that scheduled protests might block my way to the area later in the day. I packed extra snacks, knowing that the planned challenges to the electoral vote could easily stretch into the wee hours of Thursday morning. On the way, I encountered the usual sights — runners out for morning jogs, couples walking their dogs.

Due to a series of warnings from local authorities, I knew that the Capitol was likely to be surrounded by a large and aggressive group of the president’s supporters who’d traveled from around the country to rally against the outcome of the November 3 election. I knew the Capitol could end up under lockdown — but I never imagined that the rioters would actually make it inside what is, in theory, one of the most secure complexes of buildings in the country.

But soon after I arrived, a small group of protesters began to gather along the fence on the eastern side of the Capitol. I wasn’t especially concerned — a larger group of demonstrators had shown up the day prior. However I knew the crowd was likely to grow later in the afternoon.

Aside from a slightly larger-than-normal police presence within the Capitol complex on Wednesday morning, there was little sign that Capitol Police were prepared for the expected protests.

On the east side of the building, I saw no extra physical barriers — just the standard low-security fence that usually surrounds the front of the building. Approaching the Capitol grounds from the south, there was also no extra security in place outside the House office buildings.

Leading up to the scheduled 1 p.m. vote count, the mood in a press office, located in the Capitol Visitor’s Center, was comparatively relaxed. Reporters knew we had a long day ahead of us, but we were more focused on the election news out of Georgia, and later buzzing about President-elect Joe Biden’s choice of Judge Merrick Garland as his attorney general.

One reporter in the press office even quipped that it was quickly looking like the Electoral College vote count might not even be the biggest news of the day. Famous last words, as the saying goes.

Shortly before the vote counting was scheduled to begin, crowds around the Capitol — particularly on the west side of the complex, overlooking the National Mall — had grown significantly.

I gathered with other reporters alongside the roped-off walkway in Statuary Hall to watch the Senate procession carrying the electoral votes to the House chamber. As the Senators walked by, I received texts from friends and JI colleagues who spotted me on television in the background.

The first clear sign that the situation was taking a turn came around 1:20 p.m., when a message from a JI colleague alerted me that the Capitol Police were evacuating the Cannon House Office Building in response to a suspicious package. I soon learned that the Library of Congress’s James Madison Building was also being evacuated.

Reports of members of Congress and staffers being told to shelter in place or in the maze of tunnels that run under the Capitol grounds began to filter in.

Even at that point, I saw little visible worry from Capitol Police officers — a few seemed to be closely tuned into their radios, but there appeared to be no major active concern, and no instructions were provided to us to prepare for a possible lockdown.

At 2 p.m., I watched in real-time through a window as several rioters breached the east side fence, though only a few demonstrators crossed through at those entry points. Police appeared to be moving the barricades back into position, until violent protesters along the remaining portions of the fence began to shake the barricades, knocking over the structures.

A small group of rioters rushed over the downed fence, while others initially hung back. It wasn’t long before a mob of people surged toward the Capitol. Minutes later, I watched from another window alongside stunned Hill staffers and a congressman, who pushed himself up out of his wheelchair to gaze out at the crowd. By that point, the crowd had made its way to the top of the front steps of the Capitol building and had climbed on top of the police vehicles stationed around the entrance.

“Oh my god,” the congressman murmured.

Despite the crowd of armed rioters outside, the Capitol was eerily quiet. Traversing the Capitol, most people I saw were huddled around windows, trying to catch a glimpse of the unfolding scene.

Inside the chambers, debate continued as normal, with the members seemingly oblivious to the angry mob literally outside the doors.

Hoping to stay closer to the heavily secured Senate chamber (I had made the decision that posting up near the vice president and his Secret Service detail was the safest bet), I dashed back across the building, hearing a rhythmic banging reverberating through the high-ceiling halls — rioters slamming on the front door of the building attempting to gain entry.

But there was still no guidance from police, some of whom were also peering through the windows at the events unfolding outside.

“They don’t seem concerned,” I told myself, “so why should I be?” I sat down, pulled up C-SPAN on my laptop and got back to work.

A few minutes later, there was a flurry of movement from the police officers in the room, who instructed a group of us — myself and a number of nearby congressional aides — to head to the tunnels on the House side of the Capitol. My heart began to pound in my chest. I could hear my heartbeat in my ears and feel it in my head.

The next few minutes — a mad dash down the stairs, across a hallway and lobby and down another flight of stairs into the Senate-side tunnels — were the most terrifying moments of my day. In the rush out of the chamber, I became separated from the group of aides. I had no idea if the exterior door which I had to run past had been breached. I didn’t know if the rioters had already entered the building. For all I knew, I was running into their waiting arms.

Once I made it into the tunnels underneath the Capitol, I had no idea what to do next. The tunnels were deserted, save for a few maintenance workers locking down their offices. In the absence of any other instructions, I kept moving, hoping I’d come across a police officer who might know more.

But when I finally came across an officer, he had no information. His supervisor instructed me to head to Cannon — which I would soon find out had been locked down.

Making my way through the tunnels, I passed several injured Capitol Police officers. One was clutching her arm and asking a colleague, “Can you see where I’m bleeding from?” Another’s face was stained completely red, as if splashed with paint. It took me a few moments to process that he was covered in blood.

Hurrying down the deserted tunnels between the Capitol and the Cannon and Longworth office buildings, questions ran through my head. I was alone — if something were to happen to me, would anyone know? Had the rioters breached the other buildings? Were they hot on my heels in the tunnels? Was it safe in Cannon, where I was headed?

After I finally reached — and was turned away from — Cannon, I headed for the neighboring Longworth House Office Building. As I approached police and other reporters, my pulse began to steady. We were soon shepherded into the building cafeteria, where, in hushed silence, we gathered around the TVs — overhearing the workers at the cafeteria’s Dunkin Donuts branch debating whether to close up shop. I learned on Twitter that the Capitol building had been breached just moments after I’d exited.

I scrolled in stunned horror through tweets showing members of Congress and the press barricaded inside the House chamber. I saw reports of shots fired and I took in the photos of rioters rampaging through the same halls I had wandered sedately through just hours earlier.

News was scarce down in the cafeteria. Occasionally, I’d see police hurrying by. One officer dashed into the cafeteria looking for a medical professional. Later, police ran past, rolling someone — who I later learned was a member of Congress — swiftly down the hallway in an office chair.

Over the course of the next few hours, the mood eased significantly — a sense of tedium slowly began to replace the fear that had previously permeated the cafeteria. As the lockdown continued, a crowd headed off to get food from the still-open snack shop. One staffer remarked dryly that the snacks could end up being not just our dinner, but also our breakfast.

I noted to myself that even while trapped together amid unprecedented circumstances, somewhere between a quarter and a third of the individuals in the cafeteria were not wearing masks.

Information remained scarce for the next few hours — at 5:50 p.m., an announcement about the 6 p.m. curfew implemented by Washington Mayor Muriel Bowser rang throughout the building.

Around 7:45 p.m., Capitol police and staff guided a band of reporters back inside the Capitol, up an elevator and into the House press gallery. We quickly took our seats and dove into a bag of snacks that had been left behind. With the proceedings about to begin again, we knew we still faced a long night ahead. Still having no idea how — or if — I would be able to retrieve my belongings from the visitor’s center press office or how I’d get home in a city under lockdown, I latched onto the one certainty I had — it was time to get back to work.