In ‘the age of the infographic,’ tech-savvy young Jews are creating a space to share their experiences 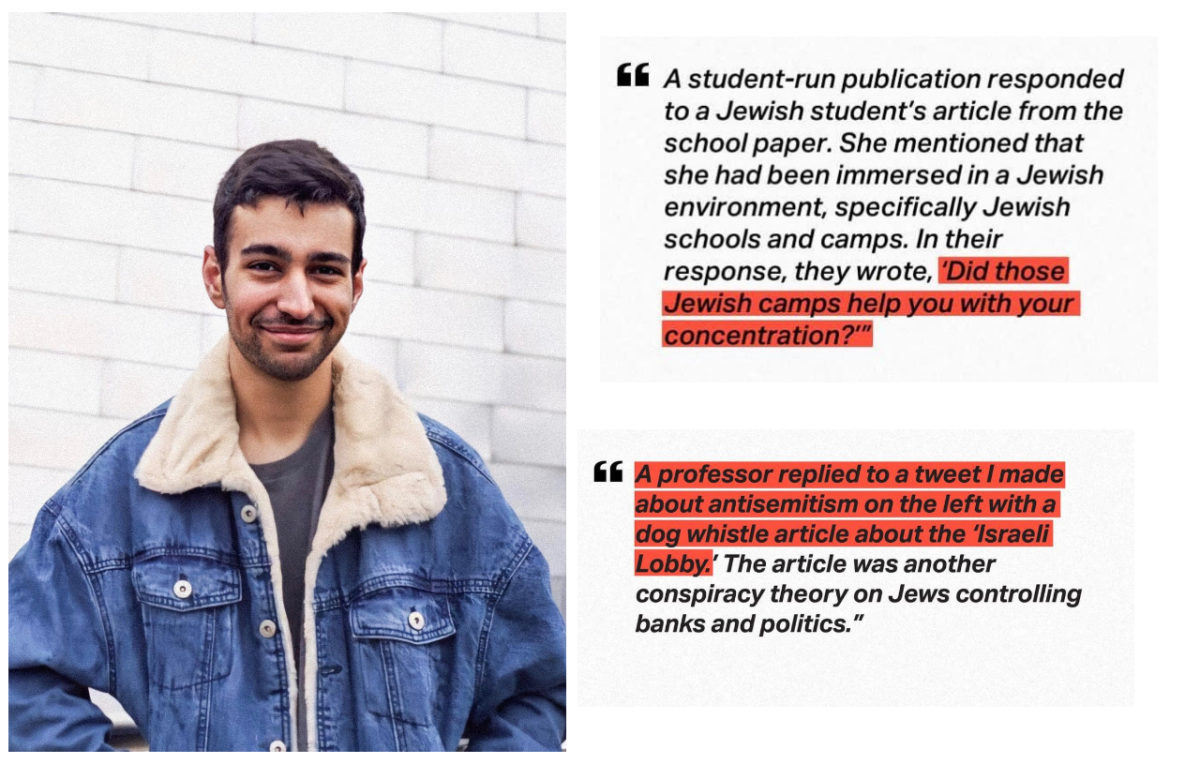 Isaac de Castro, the founder of the @JewishOnCampus account.

When Americans across the country gathered on the streets in May and June to protest the killing of George Floyd, a new viral trend emerged simultaneously on Instagram: simple, colorblocked educational infographics. Activists were using posts with text-based images, usually in pastels or muted earth tones, to share information about issues including racism and police brutality.

For many young people on the left, scrolling through Instagram in the subsequent months became akin to a communal civics lesson, with pleas to vote, lessons about American history and testimonials of people who had faced racism.

At the same time, Jewish students have been using Twitter to share their experiences of antisemitism on college campuses. Following the Instagram activism trend, some of them created an account called @JewishOnCampus to document their experiences. The account’s first testimonial shared the story of a Michigan State University student who attended a vigil following the 2018 shooting at the Tree of Life Synagogue in Pittsburgh. The student said that a university employee stood up and said, “What about the suffering of the Palestinians?” As the student recalled: “I froze out of fear and shock, and in that moment felt disposable.”

Recently, the account highlighted the experience of a student at Indiana University who was attending a Kol Nidre service outdoors when someone shouted “Heil Hitler” out a car window. A DePaul University student reported being called a “dirty Jew” by members of the campus group Students for Justice in Palestine. Other posts feature educational resources, like an explainer on Zionism and data on hate crimes committed against Jews. In less than six months, the account has gained nearly 25,000 followers.

Isaac de Castro, who founded the account and is now a senior studying architecture at Cornell University, had followed the Twitter antisemitism conversation closely.  He was already an active member of “Jewish Twitter,” which had become his main connection to the Jewish community when his coursework kept him from being able to attend Shabbat services and other campus events.

While at Cornell, de Castro grew familiar with the puzzling brand of antisemitism that had emerged in his humanities classes, after his initial surprise that Israel was singled out and criticized in his architecture and urbanism classes. “Colonialism is brought into the narrative a lot,” de Castro explained to Jewish Insider. “Israel is presented as the settler-colonialist state in the 20th century,” he added, describing the prevailing theme as “the bad white European Jew comes and takes the brown Palestinians’ land.”

As he read through tweets about pro-Israel students being doxxed — a relatively new term for having one’s personal information, including phone number and address, posted publicly — and receiving death threats, de Castro thought of Instagram’s infographic activism trend. “That same day, I posted a tweet that was like, ‘We need to have one of these accounts modeling other minority group accounts that are posting anonymous stories,’” de Castro said.

In early July, de Castro created the @JewishOnCampus account with two other college students he met on Twitter. On a gray background overlaid with black text — with red highlighter for emphasis — the account shares anonymous experiences of antisemitism on college campuses in the U.S., with occasional stories from the U.K. and Canada. De Castro, who calls 2020 “the age of the infographic,” creates the graphics himself.

Reading all the hate documented in @JewishOnCampus’s posts can be overwhelming. But ultimately, the account — and dozens like it, with names like @ProgressiveJews, @JewishLGBT, and @JewishPerspective — serves to bring together millennial and Gen Z Jews who have struggled to find a place in the ongoing discussion about racial bias and inclusivity. And at the same time, these accounts have created meaningful online communities among young Jews who are yearning for connection when in-person social gatherings remain rare and college life has been relegated to Zoom.

Jewish students and professionals who work on college campuses hoped that when life moved online in the spring, antisemitism would not follow. Mark Rotenberg, vice president of university initiatives and legal affairs at Hillel International, told JI that online attacks against Jewish students have increased since the start of the pandemic.

With classes and social events held largely online, “there are fewer swastikas on buildings or rocks through windows at Hillels,” Rotenberg said. However, he noted, there has been “a very substantial increase in the kinds of attacks that occur and the vicious nature of the words that are used in social media.” Rotenberg suggested that the increased hostile rhetoric observed online is rooted in an “intolerance and hatred that would only very rarely be done if it was face to face.”

Rotenberg has met virtually with the founders of @JewishOnCampus and encourages their activism, though it operates independently of Hillel. “These platforms generally provide a really important opportunity in the COVID pandemic timeframe for Jewish students to not feel alone, to be able to share when they feel and have experienced these kinds of things, to be aware that there are other Jewish students who are listening,” he said.

Meanwhile, these same Jewish students are joining the protest movements that are calling out inequality and advocating for better treatment of minority groups in the U.S. But some of them see a dissonance in a movement that advocates for a broad vision of racial equality that almost never addresses Jews or antisemitism.

“Your Jewish friends can hear your silence and it is deafening,” read a July post from the account @JewishLGBT. In the caption, the account noted instances when members of the Jewish community were challenged over their commitment to progressive causes due to their support for Israel. “A lot of people who are ‘prepared’ to be allies are only prepared to do so under conditional circumstances. ‘I’d totally support you against antisemitism and the hate crimes you’re experiencing except first I need to know whether you’re a Zionist or not,’” the post read. “You cannot claim to care about every marginalized group but leave Jewish people out of your narrative. Include Jewish people in your activism. That’s all we’re asking.”

The page’s follower count skyrocketed. Elisheva, the 20-year-old who runs the account (who asked to be identified only by her first name due to fear of online harassment), told JI that when she took over @JewishLGBT in 2016, it had just 100 followers. Before that post, she said, it had reached 10,000 followers, and since then it has grown to at least 27,800. But even as her follower count has grown, her target audience remains Jews in the LGBTQ community. “A lot of Jews just need their own safe space — someone who understands their fears and worries,” she said. “There aren’t enough Jewish voices online.”

Elisheva made aliyah with her family to Israel three years ago from South Africa, where she said she was an “aggressive feminist” and “very into anti-racism.” But she also witnessed South African universities hosting Israel Apartheid Week, an annual event on many campuses that features anti-Zionist speakers and other public displays singling out Israel for its treatment of Palestinians. Elisheva said she knew of Jews on campus during Israel Apartheid Week who faced harassment and questioning over their presumed support for Israel.

Accounts like @JewishLGBT provide a digital home for progressive Jews who feel too liberal for traditional pro-Israel groups, and too pro-Israel for liberal groups. “I would say it’s a difficult place to be a progressive Zionist,” said Amelia, the 16-year-old founder of @ProgressiveJews, a page that grew from 2,000 followers at the start of the pandemic to nearly 16,000 today. (Amelia also asked to be identified by her first name for fear of harassment.)

As Amelia sees it, right-leaning groups “still have a dominance over all Jewish activism… and I don’t love that it’s really only mainly focused on Israel,” she said. She wants to find a way to merge her liberal politics with her Zionism, which she feels can’t happen in the advocacy groups that only work on Israel issues. But more radical anti-Zionist Jewish groups like Jewish Voice for Peace also don’t fit her worldview. “It’s very uncomfortable, honestly, because it always feel like you’re trying to find this balance between super pro-Israel, super anti-Israel, and I and a lot of other progressive Jews that I talk to either feel like we’re either too Zionist or not Zionist enough, no matter what we’re saying about antisemitism,” Amelia explained.

The young people who operate these pages agree that mainstream Jewish institutions have not successfully provided students with material to respond to online antisemitism. “The social media aspect has been missing,” said de Castro. “We’re putting the story on this pretty square, and these are really compelling stories, some of them shocking,” he explained. “That excites people, that they have a resource to counter for example SJP or BDS or JVP infographics that are going around, and there hasn’t been really a Jewish group that has been providing that for them.”

Bari Weiss, the former New York Times opinion editor and author of the book How to Fight Anti-Semitism, told JI that the students running these accounts are “leaders of our community. Sure, they are using social media in a savvy way. But lots of people can master Instagram,” Weiss said. “What makes them special is their courage and moral clarity.”

Though the pages’ followings have grown, the students running the accounts admit it can be hard to find that strength. “It’s been a challenge after the account has grown so much to have the courage to post about Israel-related issues specifically,” Amelia said. Her criticism of antisemitism has found supporters on both the left and the right, leaving conservative followers confused (and sometimes angry) about the page’s support for Joe Biden and progressive causes.

Some of the pages’ ambitions extend beyond social media. De Castro said that @JewishOnCampus recently applied for nonprofit status with the IRS. The group hopes to work with university administrations to address antisemitism on their campuses, and plans to use its database of more than 1,000 student testimonials to provide insights and guide activism.

Still, despite these accounts’ focus on spotlighting a challenging and painful issue, their founders feel strongly that the communities they created are uplifting and encouraging. Elisheva, who runs @JewishLGBT, said that when she notices she has posted too many “serious” things, she shares something more lighthearted, like a Hanukkah meme. “I don’t want people to think Judaism is a scary religion, or only [focused on] antisemitism,” she explained.

These online communities, in addition to starting conversations about antisemitism in young adult circles, have real-world implications. “The people that I made this group with, people who I had never met before are now close friends of mine,” de Castro said.