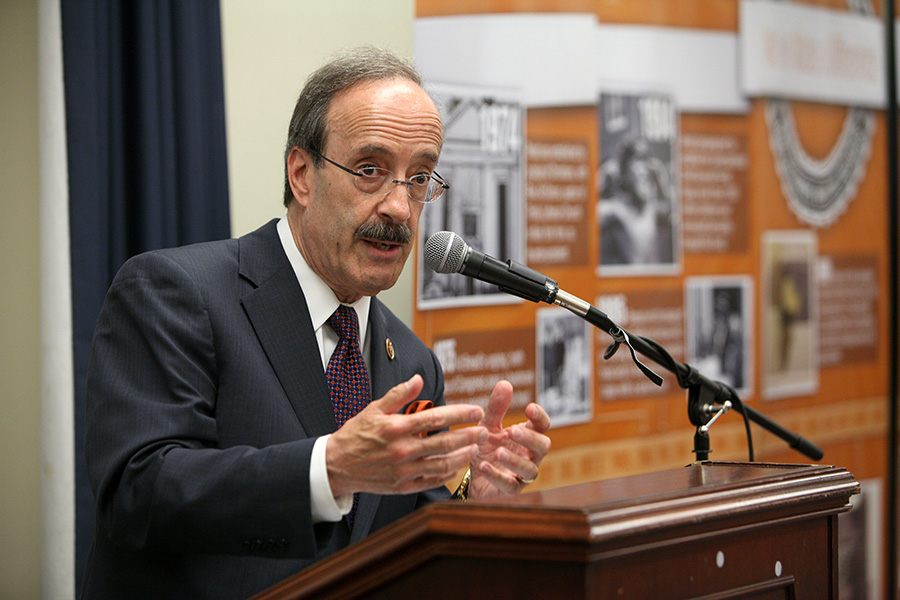 Rep. Eliot Engel (D-NY), who is facing a formidable challenger ahead of the June 23 Democratic primary, appeared at a Tuesday press conference in the Bronx alongside borough president Rubén Díaz, Jr., and his father, city councilman Rubén Díaz, Sr.

But what should have been a moment of vindication for Engel — who has been accused by his opponent, the progressive Democrat Jamaal Bowman, of being absent from the 16th congressional district — turned into something of a fleeting public relations fiasco for the congressman, who was there to address the protests that have riven the city over the past week.

At one point, Engel could be heard on a hot mic asking the younger Díaz for the chance to address the crowd despite Díaz not appearing to have room for him at the lectern. “If I didn’t have a primary, I wouldn’t care,” Engel pleaded. “Don’t do that to me,” Díaz Jr. replied.

Engel’s entreaty was widely ridiculed on social media, including by Bowman, a former middle school principal, who seized on the opportunity to call out his opponent for the apparent indiscretion. “This is so incredibly painful to watch,” he wrote on Twitter. “It hurts.”

But Engel contextualized the hot mic comment in a statement provided to Jewish Insider by his campaign spokesman.

“In the context of running for re-election, I thought it was important for people to know where I stand, that’s why I asked to speak,” the congressman said. “Of course I care deeply about what’s happening in this country, that’s what I wanted to convey. I love the Bronx, grew up in the Bronx and lived here all my life. I would not have tried to impose on the Borough President if I didn’t think it was important.”

David Greenfield, a former Democratic city councilman who serves as the CEO of the Met Council, also defended Engel’s remark in a tweet on Tuesday afternoon. “I’ve been doing this for a long time,” he wrote. “Really seems like he was complaining about the speaking order at a press conference. As in ‘if I didn’t have a primary I wouldn’t care [about when I speak].’ Seems like this is being blown way out of proportion.”

In a Wednesday morning email, Bowman’s campaign announced that he had raised more than $107,000 from nearly 3,000 donors on June 2 alone.

An earlier version of this post mistakenly noted that the gaffe was not mentioned in Tuesday night’s debate. The debate was prerecorded and only aired on Tuesday night.