'There’s nothing more sacrosanct than the right to vote and the ability to vote,' says candidate Kweisi Mfume 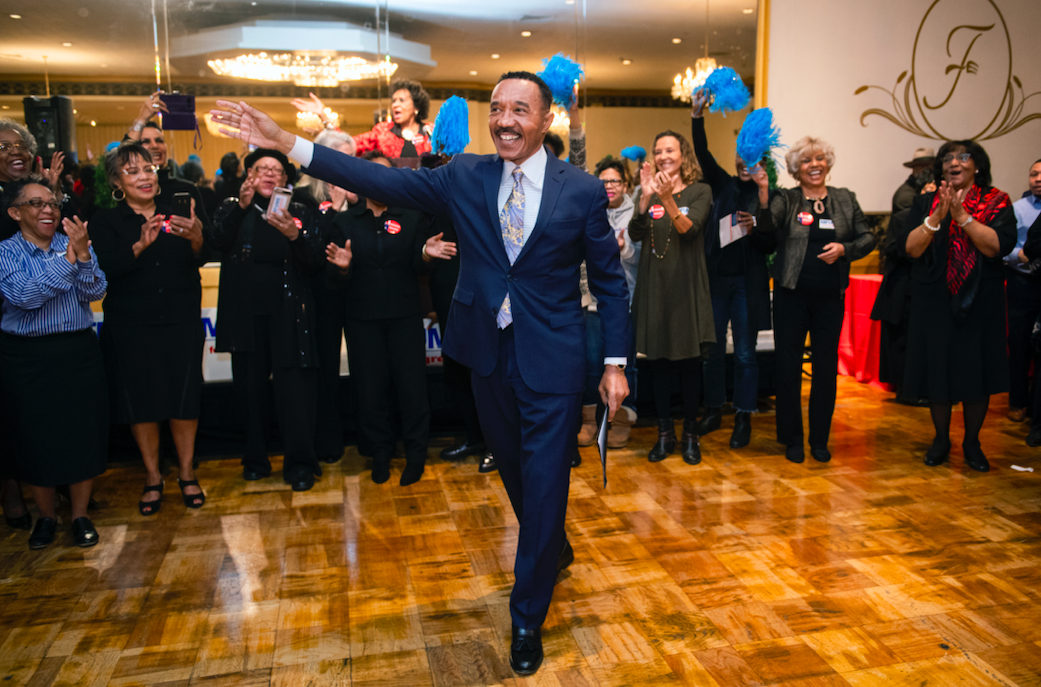 Kweisi Mfume, Democratic candidate for Maryland's 7th Congressional District, arrives to a campaign rally at the Forum in Baltimore, Md., on Sunday, January 26, 2020.

Maryland Governor Larry Hogan announced on Tuesday that the state’s upcoming presidential primary, originally scheduled for April 28, would be pushed to June 2 as a result of the spread of the coronavirus. The Republican governor said the special election to fill late Rep. Elijah Cummings’s seat in the state’s 7th district will still be held on the original date, but voters will cast their ballots by mail instead of in-person.

Not a surprise: Kweisi Mfume, the Democratic Party’s nominee for the seat, told JI he was not surprised by the decision. “In a democracy,” he told JI, “there’s nothing more sacrosanct than the right to vote and the ability to vote. The governor’s decision today protects both… I support the governor’s decision to have an all mail-in election with proper safeguards on April 28 so that we’re able to finish the process that started last October.” Mfume — who represented the district prior to Cummings, leaving office in 1996 to lead the NAACP — added that by the time the special election is held next month, the seat will have been empty for more than 25% of the term. Mfume will face off against Baltimore County Republican Committee member Kim Klacik.

So nice he’s doing it twice: Mfume will also appear on the June 2 primary ballot in order to qualify for reelection in November. Mfume — who beat two dozen challengers in February’s special primary — will likely once again face off against a crowded field to represent the district. He is prepared for the possibility that the June primary may also be conducted by mail-in ballot, and said going through the process in April “gives [Maryland] the sort of body of knowledge and information that we would need if we have to do the whole thing statewide.”

Better than the alternative: Mfume was critical of the controversial decision to postpone primary elections in Ohio in the eleventh hour. “I was always taught that the legislative branch writes the laws and the executive branch executes the laws and the judicial branch interprets the law,” he said. “The judicial branch in Ohio has interpreted election law and pretty much said no, but the governor, as we know, has overridden that. Not knowing what will play out there, it is something that obviously is going to have to be revisited, because if not it will establish a precedent that I don’t think the legal system would want to live with.”

Getting it right: “I think the House and the Senate, they have stepped up,” Mfume told JI. “I’m really heartened by what I’ve seen in terms of the congressional response. It was a little slow at first, there was a little finger-pointing at first, but I think everybody now realizes that the good of the many now outweigh the good of the few.” Mfume also praised the Centers for Disease Control as well as the National Institutes of Health, where he once served on its National Advisory Council on Minority Health and Health Disparities.

Room for improvement: Mfume had less praise for President Donald Trump’s handling of the situation. “With respect to the president, it is my opinion that he got off to a slow start to say the least and probably thought this situation would either reverse itself or slow down, and that’s not the case,” he said. “The governors of the United States, in my opinion, have been much more proactive on this and I think the White House is slowly starting to catch up… It’s almost like the tortoise and the hare — and he’s trying to catch up.”