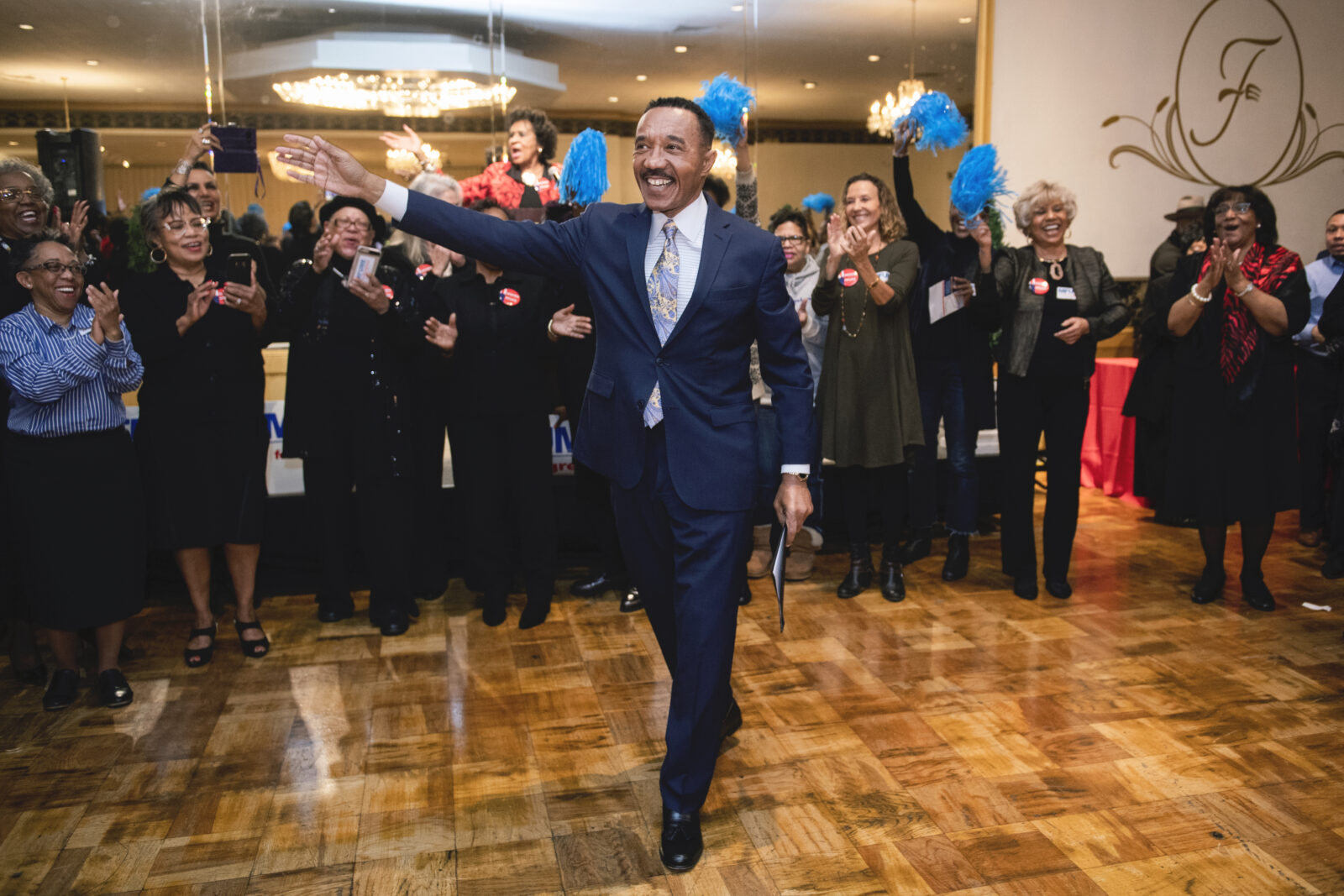 Meet Elijah Cummings’ predecessor — who is aiming to become his successor

Kweisi Mfume is running in next week’s primary to win back the same congressional seat he held before his late friend, Elijah Cummings.

The mile walk from Baltimore Pennsylvania Station to Kweisi Mfume’s campaign office in the former Jewish-owned Charles Fish & Sons furniture store on Eutaw Street is a study in contrasts. Amid the gleaming libraries and museums that line parts of Charles Street, homeless people sleep on sidewalks even on a freezing cold January morning. A makeshift memorial with roses and an “RIP” sign sits kitty-corner from Mt. Vernon Place’s Washington Monument, created by the same architect as its illustrious cousin on the National Mall.

President Donald Trump called Maryland’s 7th congressional district, which the late Elijah Cummings represented, “a disgusting rat and rodent infested mess,” in a tweet last July. That characterization spurred controversy and charges of racist motivations, but it’s a reality that tree trunks grow out of windows in abandoned buildings mere blocks from some of Baltimore’s most successful institutions. Certain views of the city would make seamless Twilight Zone backdrops.

Two dozen candidates have filed to run in the solidly blue district’s February 4th primary following Cummings’ death in October, including Maryland State Senator Jill Carter and the late congressman’s widow, Maya Rockeymoore Cummings, who served as chair of the state’s Democratic Party. The winner of next week’s primary is all but assured to win in April’s special general election.

But Mfume has an unusual credential in this congressional bid. He held the seat from 1987 to 1996, before becoming president and chief executive officer of the National Association for the Advancement of Colored People (NAACP). The night before Mfume announced he wouldn’t seek reelection in 1996, he called Cummings, a friend of more than 40 years. The first time Mfume called to tell Cummings he wasn’t seeking reelection, Cummings hung up on him in disbelief. When Mfume called back, Cummings finally understood his friend was encouraging the then-Maryland State House representative to throw his hat in the ring. Some 25 years later, Mfume wants to come full circle, and in a lengthy sit-down interview with Jewish Insider, he said he brings fresh ideas to fixing the city’s biggest problems.

“I believe the past is prologue. We look at it. And if we’re fortunate, we learn from it,” says Mfume, clad in a dark sweater, blue blazer, jeans and dressy sneakers. Ceiling moldings evoke a theater, and the acoustics are good enough that Mfume calls out “Bless you!” after hearing a staffer sneeze on a lower floor.

When Mfume looks to the past to envision Baltimore’s future, he arrives at two precedents: the homestead program under former mayor William Donald Schaefer, wherein a city resident could purchase a vacant home for $1 and a commitment to maintain it for five years, and the European Recovery Program, better known as the Marshall Plan.

Under the homestead program, houses were restored, many people ceased to be homeless and urban blight receded. “There’s nothing like having a homeowner in place in terms of taking care of the property,” Mfume said. “I can’t seem to get anybody to think about that anymore.”

Eyeing the Community Development Block Grant program, Mfume called for a “$16 billion Marshall plan” for U.S. cities, which would take its lead from the commitment the nation made to help rebuild bombed-out Europe after World War II. The United States fostered businesses and restored properties and hope, and then stepped back, according to Mfume. “You would never know Europe was bombed the way it had been,” he said. The federal plan would have to have audits, so that there’s no “fraud or hanky panky taking place,” he added. (Two recent Baltimore mayors have been indicted for fraud or similar ethical breaches.)

Among the ingredients in Mfume’s recipe for improving the district’s future are legislation he worked on 25 years ago, including family and medical leave, and credits for childcare and apprenticeship and training programs for young people who aren’t in college or the military.

Another program crafted during Mfume’s time in Congress, which Cummings expanded, introduces young people from the district to Israelis as part of a leadership-building exercise. Mfume noted that more than 20 years ago, he and Senator Ben Cardin (D-MD), who at the time represented Maryland’s 3rd congressional district, worked together to create the precursor to the Elijah Cummings Youth Leadership Program in Israel. Cummings took the foundation, which Mfume and Cardin created, and “built the superstructure,” Mfume said. In its current iteration, the two-year fellowship involves leadership development and community service and brings high schoolers who live or study in the district to Israel for three-and-a-half weeks during the summer before their senior year.

Mfume feels strongly about continuing the program. “I’ve seen the young people that come through that program,” he said. “I know, as Elijah used to say and as I still believe, that they are the messages that we send to a future that we may never see.”

The Middle East landscape has changed dramatically since the last time Mfume walked the halls of Congress as an elected official, but his support for Israel has remained steadfast. As a congressman, he voted in favor of the Jerusalem Embassy Act of 1995. He was supportive of H.R. 246, a resolution passed last year denouncing the efforts to boycott, divest from and sanction Israel — actions that Mfume told JI “do not serve the interest of peace.” He called for direct negotiations between Israelis and Palestinians, which is “the only way,” he said, “to achieve an end to the Israeli-Palestinian conflict.”

In addition to visiting Israel twice and going to Auschwitz, where he remembers images of shaved heads, the ovens and the suitcases, Mfume has tried to learn about the Jewish community. That includes Orthodox Jews, who live in Baltimore in greater numbers than nearly anywhere else in the U.S. “It doesn’t necessarily mean that they are a cut above or slightly better than anyone else,” he said. “I like orthodoxy. I like tradition. So I have a special affinity in my heart.”

In the 1980s, Mfume told JI, his social circle included former AIPAC president Howard Friedman, real estate developers Larry Macks and Michael Klein, and attorney David Shapiro — a group the Mfume called the “Rat Pack.” Of Friedman, Mfume said, “I was no Sammy Davis Jr., but I told Howard he was no Frank Sinatra.”

Part of the extensive career upon which Mfume is running is his time at the helm of the NAACP, but a recent Baltimore Sun article reported that records show Mfume’s NAACP performance was questioned and he was pushed out by a “secret vote.” Mfume dismissed the reporting, saying that at the time, more than 15 years ago, the board unanimously voted to give him a raise and contract extension. He added that he arrived to a $4 million budget deficit and left the organization after nearly nine years, notifying leaders he was resigning before the reported “secret vote,” with a surplus.

“It’s never been corroborated,” he said of the reporting. “I was a little curious when I saw that ‘pushed out’ headline, but then I realized a lot of this is selling newspapers.” (A former radio journalist, he bemoaned the current age when reporting “morphs into commentary too much.”)

Estimates of the likely Jewish voting population vary widely, but there is definitely “a significant Jewish presence within the district,” Libit said. Oriole Park is just outside of the district, but the latter’s unusual boundaries evoke a baseball mitt’s finger slots. Several synagogues, yeshivas, and Jewish cemeteries lie within the district’s eruv, or boundaries, so to speak.

Cummings, who as a young man worked for Jewish pharmacist Albert Friedman and credited him with supporting and pushing him to succeed, understood the interconnectedness of Baltimore’s Jewish and African American communities, Libit said. “He really wanted to invest in it.”

During his NAACP tenure, in 2000, Mfume suspended the association’s Dallas chapter president following antisemitic remarks about then-vice presidential candidate Joseph Lieberman. Mfume at the time called the statements “repulsive” and “anti-NAACP.” Six years prior, the Sun reported that Mfume, then the chair of the Congressional Black Caucus, and other African American leaders had expressed outrage to Nation of Islam leader Louis Farrakhan about antisemitism but then entered into what Mfume called a “sacred covenant” with the group. Met with controversy and pushback from the caucus’ own members, the CBC renounced the pact after several months.

Asked about Farrakhan, Mfume said: “I think people can only go by what they hear, unless they investigate to try to find out more about what they don’t know.” He added that he didn’t have any insight or revelation about the minister “that I can think of that are different from what people may hold in their own hearts. We are our records. We are our words, and I think he probably is a better person to answer that than I am.”

Education and crime are two areas that are of particular interest to Baltimore Jews, Libit said. Mfume, who chaired Morgan State University’s board of regents and who for 12 years was a Johns Hopkins University board trustee, has given both extensive thought. “I believe education and crime are inextricably linked and bound together. When you don’t have an education, you’re more susceptible to giving in to crime,” he said. “Education has got to be supplanted with values.”

Growing up, Mfume was bused past white schools to all-black-ones, which were cold in winter and stifling in summer and had inadequate desks and tables. But his teachers cared about educating kids, and when he went home, to the very poor and segregated neighborhood where he grew up, Mfume’s mother instilled values in him. “My sisters and I were taught that you work hard, you play by the rules, you love your country, you cherish your faith, you respect your elderly, and then you respect yourself,” he said.

Two weeks after his mother died in his arms, Mfume, then 16, dropped out of school and took up odd jobs like shoe shining, carrying groceries and selling newspapers, so he could send money to his 80-year-old grandmother. He earned a GED and went to Morgan State, where he was the oldest one in his class to graduate. But he was the exception.

“Some of us get saved, but for the most part, the guys I grew up with went to jail and went to jail and went to jail,” he said. “They got murdered, or they’re in positions now it breaks my heart, because they can’t take care of themselves and their families. I don’t want society to manufacture another generation like that.” It was around this time that Mfume — born Frizzell Gray — changed his name. The name Kweisi Mfume comes from Ghana, where an aunt had traveled, and means “conqueror son of kings” or “born on Sunday” (which he was).

Prior to the interview, Mfume had participated in a radio debate, and he said then, as he often does, that racism, sexism and antisemitism are wrong. “We’ve got to recognize that we have brothers and sisters who may not worship like we worship, that may not look like we look, that may not live where we live,” he said.

Mfume had walked a mile and a half the previous day, Martin Luther King Jr. Day, and he cited his “indefatigable spirit,” which he said makes his wife think that he’s crazy sometimes, as an asset in pursuing his former seat. “I think I have almost twice the energy of some of the people who are running, who are half my age,” he said, and “who are burned out by 3:00 in the afternoon. I’m just go, go, go.”