Meet the next Jewish Republican congressman from Long Island 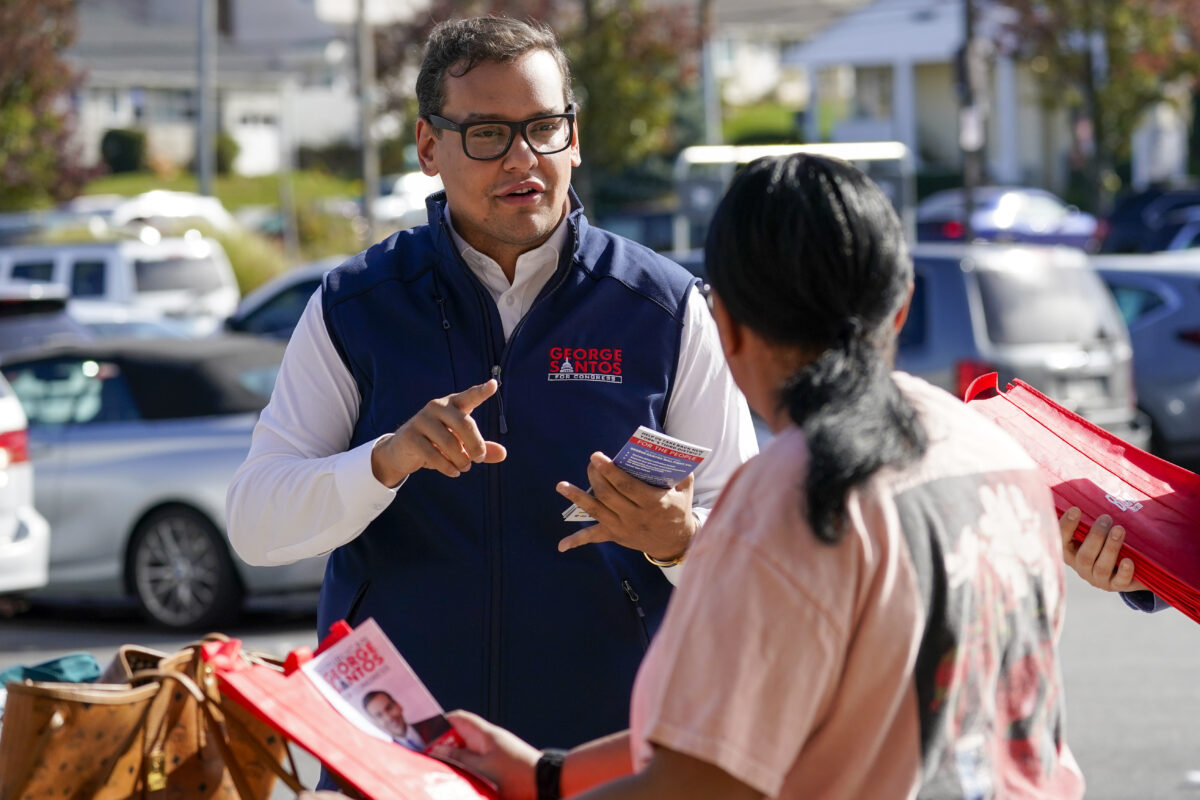 Ed. note (added on Friday, Dec. 23, 2022, at 2:48 p.m. ET): Since this article was published last month, new revelations uncovered by Jewish Insider, The Forward and CNN have shown that Santos appears to have misrepresented his purported Jewish heritage as well as the story he told of his maternal grandparents’ immigrant journey from World War II Europe to Brazil. The congressman-elect came under increased scrutiny this week after The New York Times published an investigation revealing that Santos may have fabricated key elements of his background, including his résumé, education and finances. Santos, who has yet to address any of the allegations directly, said on Thursday that he will respond next week. “I have my story to tell and it will be told next week,” he wrote on Twitter. “I want to assure everyone that I will address your questions and that I remain committed to deliver the results I campaigned on; Public safety, Inflation, Education & more.”

In his second consecutive bid for a New York congressional seat, George Santos made history on Tuesday, winning a competitive race that will make him the first openly gay representative from Long Island elected to serve in the House.

The newly minted congressman-elect can also claim another unique distinction: Santos, 34, will be the only Jewish Republican member of New York’s House delegation when he is sworn in this January.

It is not a position Santos is taking for granted, he explained in a recent interview, as he prepares to represent New York’s heavily Jewish 3rd Congressional District, which covers the North Shore of Long Island as well as a portion of eastern Queens.

“The way I look at this is, I’m going to represent one of the most Jewish-rich districts in the country, with the most population of Jews,” he told Jewish Insider on Wednesday, “and I’m going to do that honorably.”

Days before the election, Santos met Ashkenazi Chief Rabbi of Israel David Lau at the Chabad of Great Neck, where the Republican candidate spoke with Jewish community members and vowed to “stand strong as antisemitism and violent crime shakes us to the core,” according to a recent social media post.

“That just tells you, I’m connected with the community,” Santos explained. “They know I’m there for them without me having to campaign on it, because it’s common sense, second nature, and I’ve always been a part of the community with them.”

He said he would apply the same level of commitment to every constituent in the district. “Whether my mother’s Jewish background beliefs, which are mine, or my father’s Roman Catholic beliefs, which are also mine, are represented or not,” he said, “I want to represent everyone else that practices every other religion to make sure everybody feels like they have a partner in me.”

Santos, a Jewish-Angolan first-generation American, prevailed over his Democratic rival, Robert Zimmerman, by a decisive eight-point margin earlier this week, flipping an open House to succeed Rep. Tom Suozzi (D-NY), who is retiring after a failed gubernatorial bid. Last election cycle, Santos failed to defeat Suozzi, losing by 12 points in his first campaign for federal office.

Even as Republicans underperformed in the midterms, the North Shore upset was part of a broader sweep in which GOP candidates claimed all of Long Island’s four congressional seats, including the Suffolk County district vacated by Rep. Lee Zeldin (R-NY), who lost a gubernatorial bid on Tuesday.

Hank Sheinkopf, a veteran Democratic strategist in New York, said there was once a “substantial number” of Jewish Republican members of Congress in the New York City suburbs.

“Santos may be the beginning of something new or just the creation of something old, which is suburban Jews as Republicans,” Sheinkopf said, suggesting that the Long Island election could hint at a possible “resurgence of suburban Jews finding themselves much more comfortable with Republicans than Democrats.”

Like Santos, Zimmerman, a longtime public relations professional and Democratic National Committee member, is Jewish as well as openly gay. The general election matchup is believed to have been the first congressional race featuring two openly gay candidates from both major parties.

The two opponents, however, claimed to hold little if anything else in common. Over the course of the race, Zimmerman had sought to persuade voters that his GOP rival was an extremist who supported a national abortion ban and participated in the Capitol riots of Jan. 6, 2021, among others things.

Santos, who denied those claims, was for his part aggressively focused on crime and inflation, echoing a broader Republican messaging strategy that appears to have resonated with voters across Nassau and Suffolk Counties. “Essentially what they don’t want is New York City coming to Long Island,” Sheinkopf told JI. “Crime was always the issue.”

In his outreach to voters in Nassau County, where Democrats hold a registration advantage, Santos recalled building close relationships with Persian Jews in Great Neck, who are traditionally conservative and, broadly speaking, believe that nuclear negotiations with Iran lend legitimacy to an authoritarian regime. “My friends in the Persian community, they’re fantastic to me,” Santos said. “I go to Shabbat with them, I go to temple with them.”

His position, he said, is the “best way to speak up not only for human rights” but also “for the freedom of the people in Israel to not live under the threat and oppression of the radical regime in Iran.”

Santos, who described himself as a non-observant Jew, said his four visits to Israel were “the most exciting experiences” of his life.

He said he was “very much looking forward, as a member of Congress, to working with” Benjamin Netanyahu, who is likely to be tapped to form the next government in the coming days. “I’m very excited to see the U.S.-Israel alliance just grow stronger and stronger each day.”

“Anything we can do from the perspective of foreign policy to strengthen that relationship,” Santos told JI, without elaborating, “I will always be an advocate and I will always sign on to those initiatives.”

Santos, a graduate of Baruch College who previously worked on Wall Street, declined to mention future House colleagues with whom he might want to collaborate. “What you see on TV and what you get in real life, it’s always different, so I don’t know,” he told JI. “It’s a matter of if our personalities are going to match or if we’re going to have the same visions and ideals for certain specific issues that we should work on together.”

“I look forward to discovering that together and working with Republicans and Democrats,” Santos said. “Whoever wants to get work done for Americans, I’m going to work with.”