'There’s a piece of this story that is still to be told,' Zeldin declared to a crowd of supporters 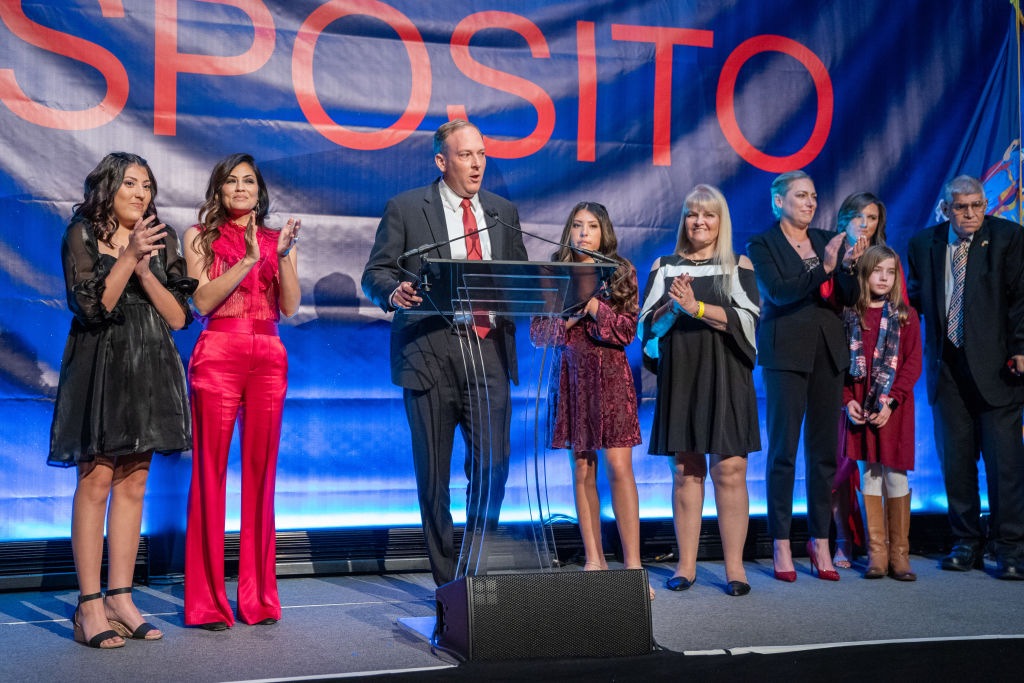 Rep. Lee Zeldin (R-NY), whose surging campaign for governor of New York had in recent weeks raised Republican hopes for a possible upset, said he was not prepared to concede the race on Tuesday night, just an hour before his defeat to Gov. Kathy Hochul, a Democrat, was called by the Associated Press.

“There’s a piece of this story that is still to be told,” Zeldin declared to a crowd of supporters at Cipriani 42nd Street in Midtown Manhattan, where he took the stage around midnight. “There’s over 1.4 million Election Day votes that are still out.”

Meanwhile, Hochul, who assumed office after former Gov. Andrew Cuomo’s sudden resignation last year, had already claimed victory as the first woman ever elected to the state’s top job. “Yes, the glass ceiling, like the one that’s above us today, was shattered tonight in the State of New York,” she said at another venue in Lower Manhattan. “And you, my friends, made it happen.”

By early Wednesday morning, Hochul had pulled in 53% of the vote, with more than a five-point lead over her opponent, a 42-year-old Republican congressman from Long Island.

In a heavily blue state such as New York, it was hardly a decisive win for Hochul, who struggled to assert herself as Zeldin’s crime-focused message resonated with voters.

At his election night watch party on Tuesday, Zeldin, whose favorable polling had been seen as extraordinarily robust, expressed optimism that the final tally would vindicate his campaign, sending a Republican to the governor’s mansion for the first time in more than two decades.

“What’s going to happen is that over the course of these next couple of hours, you are going to see the race continue to get closer and closer and closer,” Zeldin claimed, alluding to what he envisioned as “a massive victory coming out of Long Island.”

“We hope that, as these results come in, we’ll be able to prevail,” he added.

“Don’t concede!” a supporter yelled from the crowd.

Zeldin, an ally of former President Donald Trump, echoed the Republican leader as he took aim at “members of the media” who he claimed “didn’t want us ever to be in contention.”

“I’m sure NBC was pretty excited about trying to call this race quickly,” the congressman said.

Wrapping up his brief speech at Cipriani, an opulent catering hall near Grand Central Station, Zeldin honed in on the public safety concerns that he had stressed during his campaign, denouncing bail reform, calling for “safe streets and safe subways” and reiterating a pledge to fire Alvin Bragg, the Democratic district attorney of Manhattan, who has been criticized for his office’s approach to addressing crime in the city.

“We’ve been focused on ideals,” Zeldin said loftily. “We’ve been bringing our message without apology or regret. We came to this with a passion to have a debate of ideas for a better direction for New York, and we’re still totally committed toward seeing it through.”

He thanked supporters from “so many different walks of life,” noting that, in addition to Republican voters, Democrats and independents had also rallied behind his campaign. “We all united as New Yorkers because you’re committed to saving our state,” he said to applause, before encouraging attendees to “enjoy the open bar.”

Zeldin, who would have been the first Jewish Republican governor of New York, also drew meaningful support from Hasidic voters in Brooklyn and elsewhere, who valued his commitment to safeguarding yeshiva education as well as an attention to crime amid an uptick in antisemitic attacks.

Dov Hikind, a former Democratic member of the New York State Assembly from Brooklyn, who is Orthodox, said the decision to back Zeldin had been “a no-brainer.”

“We need people who are not just going to say they’re against antisemitism,” he told Jewish Insider at Cipriani on Tuesday. “But what are you doing? What’s the game plan? Show me the plan, send me a copy of the plan. How are you going to deal with out-of-control hate, which is what we’re faced with right now? Lee Zeldin, I have no doubt, will address these issues.”

Hikind said he was “cautiously optimistic” that Zeldin would prevail.

As Hochul’s narrowing lead continued to hold throughout the night, the joyous and anticipatory atmosphere of Zeldin’s party slowly began to dissipate.

Still, confronted with the prospect of an imminent loss on Tuesday, many panicked supporters had begun to convince themselves that the margins would improve even before he arrived at Cipriani to lift their spirits.

“It’s too early,” one supporter was overheard saying as Fox News called the race for Hochul. “It’s still too early.”