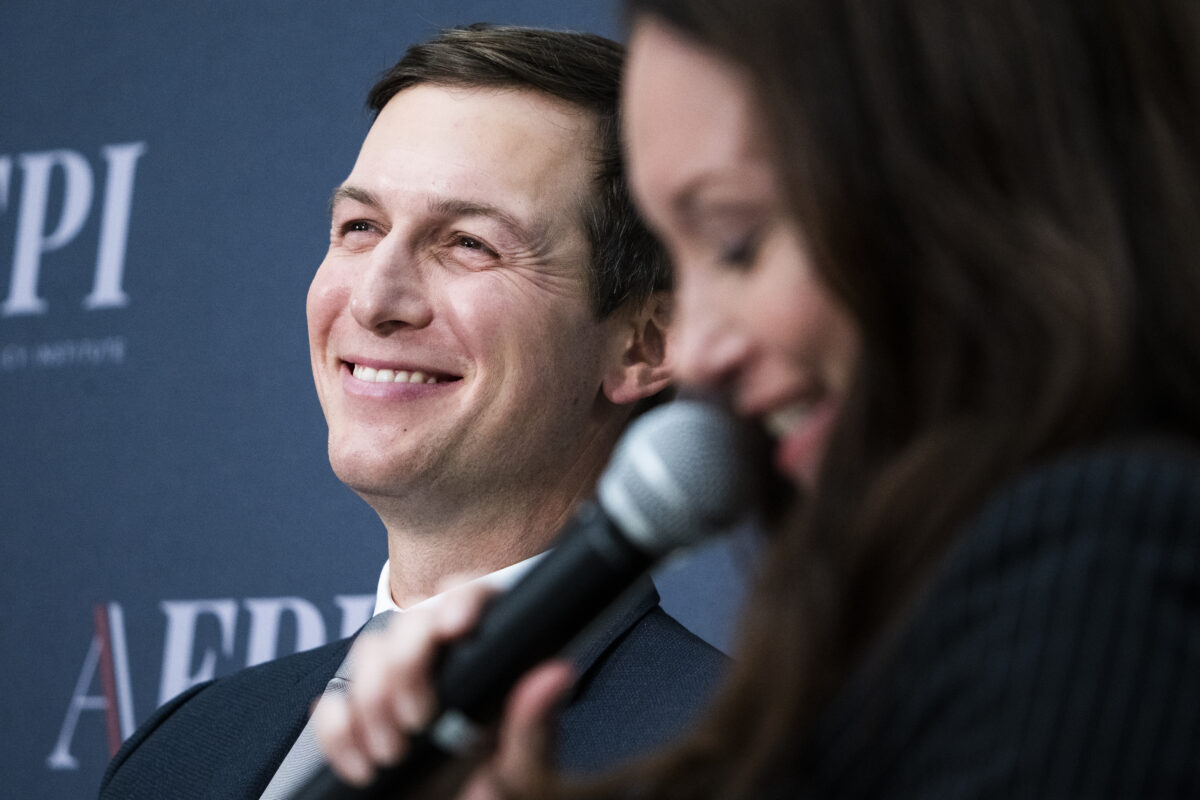 A who’s who of former Trump administration officials and a coterie of diplomats gathered in a Washington, D.C., downtown office suite on Monday to celebrate the two-year anniversary of the signing of the Abraham Accords.

The event was jointly hosted by the Abraham Accords Peace Institute, a nonpartisan organization working to build multilateral ties between Accords member nations, and the America First Policy Institute, a Trump-aligned think tank. Speakers praised former President Donald Trump for his accomplishments in the Middle East and bemoaned the media for not giving him adequate credit for the Abraham Accords.

“We knew that we had an amazing opportunity,” keynote speaker and former Trump senior advisor Jared Kushner said of the normalization deals that he helped negotiate with Israel, the United Arab Emirates, Bahrain, Morocco and Sudan. He blamed “Trump derangement syndrome” for the Biden administration’s early tepid response to the Abraham Accords.

“The current administration, it took them a year to really call it by its name,” he added, “and I think now they’ve embraced it, because they see how good it is, and that was because it’s been enduring in the region.”

Kushner spoke about his work negotiating the Accords and shared anecdotes from his White House memoir, Breaking History, copies of which were available for attendees to take home. (When Brooke Rollins, president and CEO of the America First Policy Institute and the director of Trump’s Domestic Policy Council, quoted from Kushner’s book — “page 64!” — members of the audience opened to the page she mentioned as if they were in English class.)

The only speaker at the event who had never served in government was Bruce Pearl, the Jewish head coach of the Auburn men’s basketball team, who just returned from taking his players on a trip to Israel. Pearl participated in a panel discussion with former National Security Advisor Robert O’Brien, former U.S. Ambassador to the United Arab Emirates John Rakolta, former U.S. Ambassador to Denmark Carla Sands and Rob Greenway, one of the chief negotiators of the Accords and the president and executive director of the Abraham Accords Peace Institute.

“I’m working on taking college basketball teams next year to UAE, to Dubai, and play some games there, and then get on a plane and go to Tel Aviv and play some games there, and create the Abraham Accords Cup and have it be something that is just normal,” Pearl said to applause. “Bringing ESPN alongside us and just see, yes, this is how it is now, and this is how it can be in the future.”

Sen. Joni Ernst (R-IA), co-chair of the bipartisan congressional Abraham Accords Caucus, closed out the event with a rousing speech about American global power that also dove into divisive political and cultural issues.

“The last 18 and a half months under a feeble commander in chief, a scripted and ill-equipped vice president and a blindly progressive Congress have temporarily clouded American peace and prosperity,” Ernst said. “Make no mistake, the Abraham Accords were the most significant peace agreement of the 21st century, and history will always remember the pioneers of this peace deal.”

Ernst made the case for a strong American presence in the Middle East and around the world. “Like many of you, I believe in America first always, but never America alone,” said Ernst.

Everyone who spoke at the event called for the further growth and expansion of the Abraham Accords, but largely refrained from referring to President Joe Biden or senior officials in his administration as partners in those efforts. In her speech, Rollins called the Trump presidency the “Trump first term,” suggesting the speakers gathered at the event think they’ll have another shot at growing the Accords in a couple of years.

“I think the biggest disappointment so far is that more countries haven’t been brought into it,” said Kushner, who said the Trump administration had “about six active conversations” ongoing before they had to leave office. He added that the Accords struck at what he described as a long- and deeply held myth among Muslims: that they would not be able to pray at Al-Aqsa Mosque in Jerusalem until the Israelis and Palestinians made peace.

“The Muslim population viewed the conflict with Israel through the eyes of not being allowed to have access to the mosque,” said Kusher. Now, he added, Muslims from around the world can travel through Dubai to get to Israel, and go visit the mosque in Jerusalem.

“They put it on Instagram, they put on it Facebook, and people are saying, ‘Wait, we thought that we weren’t allowed to pray there. We thought this was under attack,’” Kushner said. (Although roughly 450,000 Israelis are estimated to have visited the UAE in the past two years, the flow of tourists has not gone both ways, with a far smaller number of Emirati visitors to Israel.)

“I do hope that the current administration will focus on that and work to do that,” Kushner said, referring to efforts to expand the Accords, “because once the whole Arab-Israeli conflict is over, I think that you will have an era of prosperity and peacefulness in that region that will endure for a very, very long time.”