Auburn hoops coach Bruce Pearl: ‘Even in the midst of 1,000 rockets, we felt safe’ 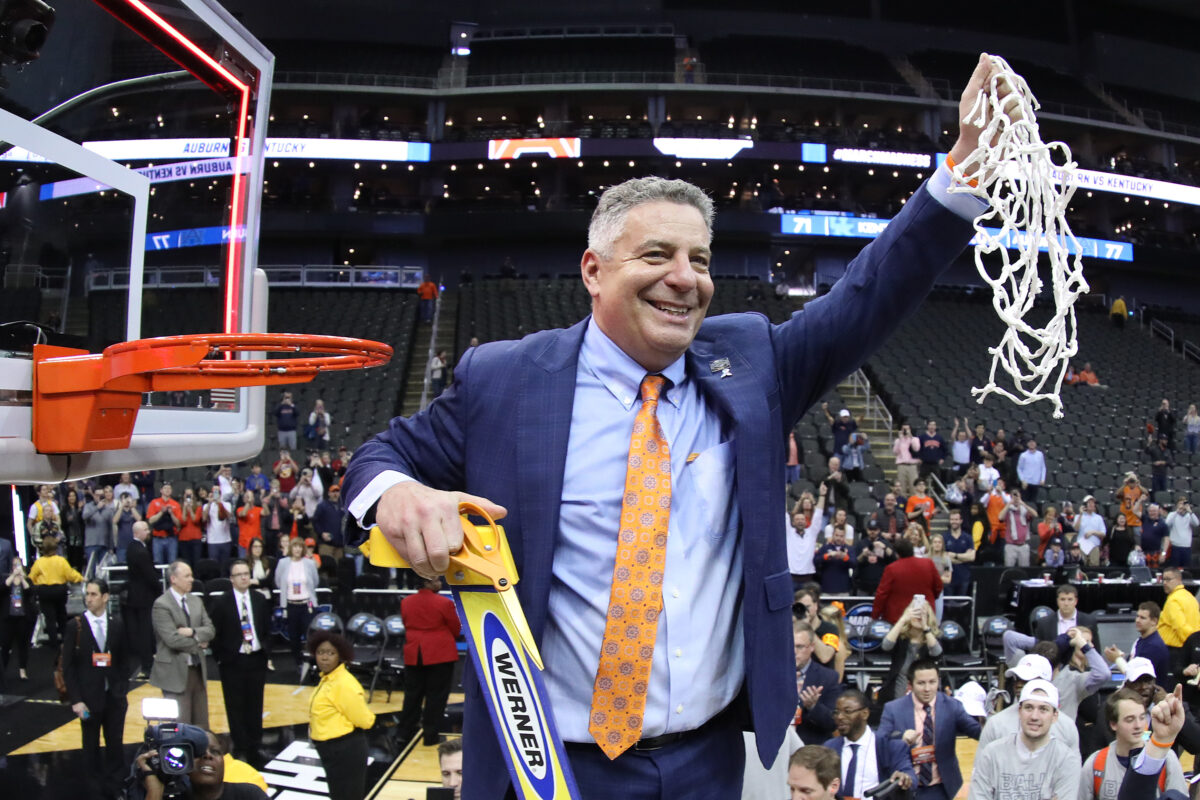 Head coach Bruce Pearl of the Auburn Tigers celebrates by cutting down the nets after their 77-71 win over the Kentucky Wildcats in the 2019 NCAA Basketball Tournament Midwest Regional at Sprint Center on March 31, 2019 in Kansas City, Missouri.

In March, Auburn University men’s head basketball coach Bruce Pearl was asked during a press conference if he and his team would be joining the pledge started by Stanford University women’s head basketball coach Tara VanDerveer to donate $10 to Ukraine for every 3-pointer sunk during March Madness. His answer, which was ultimately a “yes,” was given by way of a semi-long-winded explanation of the Purim story. In a nutshell: Queen Esther saved her people despite being safe herself in the castle, so he too would give help to Ukraine despite not facing the same threats at home.

The connection between Purim, Ukraine and sports may not have seemed abundantly clear at first, but for Pearl, Judaism and basketball have long gone hand-in-hand. A strong supporter of Israel, the Boston native has visited the country on several occasions — often as part of Jewish-Christian interfaith missions, but most recently with his team from Auburn, where they both toured the country earlier this month and faced off against Israel’s national teams.

“It very much brought their Bible alive. And if it wasn’t their Bible, it was their mom’s Bible or their grandmother’s Bible, somebody in their family is a churchgoer, and they got to see and feel [that] themselves,” Pearl recalled during an interview with Jewish Insider’s “Limited Liability Podcast,” referring to how the trip touched his players. “And then the next day, it was the Western Wall, and it was the City of David, and it was Yad Vashem. And we focused on some of these Jewish, historical, religious sites, and they got that.”

Seeing his players in Israel was important to Pearl not only as their coach, but also as someone with deep love for the country. Pearl told co-host Rich Goldberg that one of his passions is gaining allies for the Jewish people and for Israel.

“I’m not trying to change the hearts and souls and minds of the people that hate us, because they hate us. They’ve been taught to hate us and it’s really hard to change those minds. But there are a lot of people that don’t know, that haven’t been affected yet, that may be on the fence or that someday are going to face and see some real antisemitism, or experience some Israel hate. And now these kids are going to be in a position to handle it a little differently,” he said.

“Honestly, you don’t need to do much persuading. Just let the kids, let people see it, let them experience [it]. Let them see how much the people there love the land, love their history, love their country,” he added.

Pearl’s passion for Judaism was passed down to him by his family — most specifically his grandfather who immigrated to the U.S. at 14, and who Pearl credits with giving him his spiritual foundation.

“We were Conservative. I went to Hebrew school. We didn’t go to Shabbat services all the time, but I had that foundation…We need to lead our families by example in whichever way we can. And it doesn’t necessarily have to be just religious observance, but it does need to be for the love of Israel and simply for the recognition that our people have been through a lot over the years,” he said.

While their trip was filled with many highs, the Auburn players were not sheltered from the realities of Israeli life. The team’s visit coincided with a recent conflict between Israel and Palestinian Islamic Jihad.

“The most important thing I think for people to hear and understand is, even in the midst of 1,000 rockets, we felt safe,” Pearl told Goldberg.

“So while we heard some sirens, and we did have an opportunity to talk to the guys about if in the hotel you hear the alarms go off, go to the stairways, that’s going to be your safe place — away from the windows and closer to the concrete — we never had to actually exercise any of that. We heard the rockets. We heard the interceptions. We even saw puffs of smoke in the air when we were on the beach in Tel Aviv, and we felt safe,” he added.

“I’m telling you, we’re talking to Syracuse and Duke and Notre Dame and Florida and Georgia Tech, and many other college teams around the country that are very, very interested in going back to Israel next year,” Pearl said. “I do believe that, like supporting the Maccabi USA, like supporting Birthright — regular Birthright for Jewish kids to go back — this whole Birthright for college basketball to bring kids to Israel, to give them the opportunity to see it and experience it and, you know, maybe become allies.”