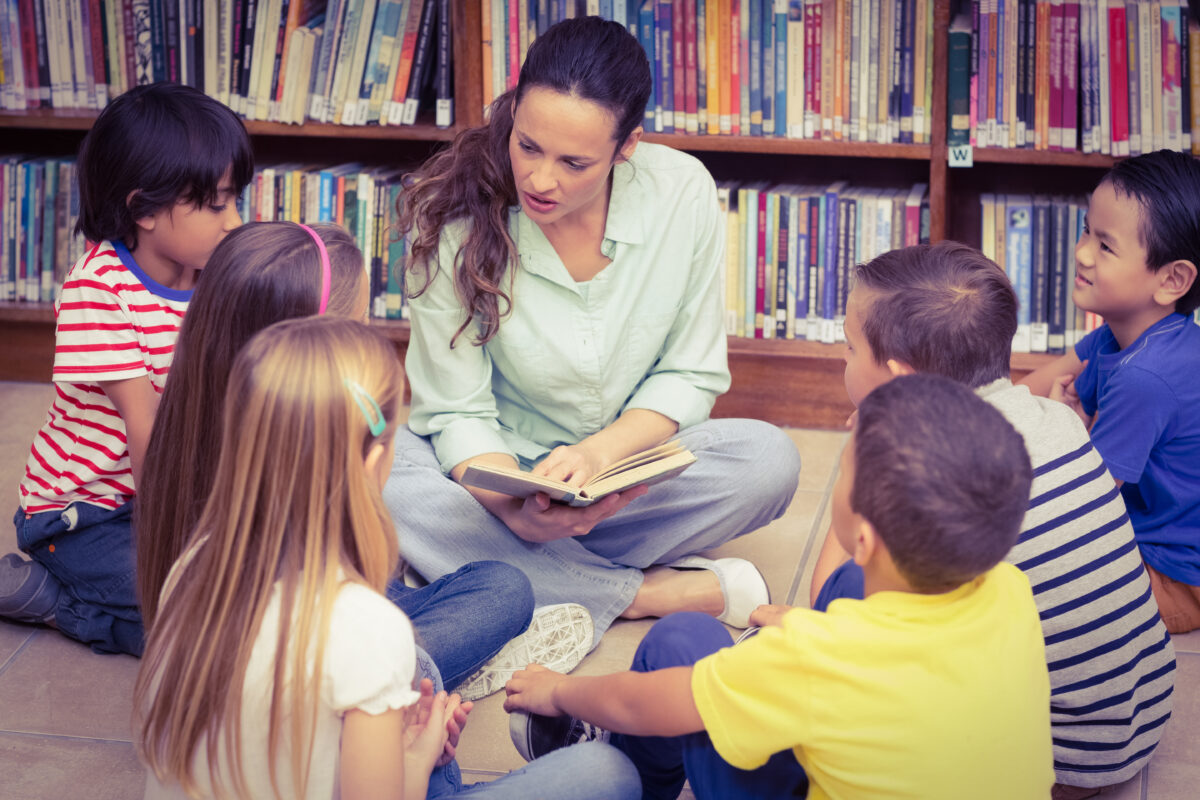 Teacher reading her pupils a story at the elementary school

Last fall, Virginia gubernatorial candidate Glenn Youngkin put a bull’s-eye on Toni Morrison’s Pulitzer Prize-winning novel Beloved. It came in the form of an ad that his opponent saw as an attempt to get the book banned in schools because of its vivid portrayal of slavery.

Now, the nationwide book-banning debate has come for the Holocaust, but with a twist. A Saturday afternoon panel at last weekend’s conference of the American Library Association in Washington, D.C., sparked controversy over the panelists’ approach to Holocaust denial.

“Today there was a sentiment made by panelists that we even must include Holocaust denial books. Holocaust denial is harmful misinformation,” Kelsey Bogan, a Pennsylvania-based high school librarian, tweeted from the conference, setting off a flood of angry responses from conferencegoers and others who work in the field.

Bogan was referring to an exchange between Nancy Pearl, a writer and librarian, and New York Times bestselling author Jason Reynolds, in which the two literary figures appeared to argue that opposing book bans means that no book — even one that promotes false claims about the Holocaust — can be banned. The panel was addressing a national campaign against book banning as battles rage in school districts around the country over educational approaches to American history and literature.

“What did I not want to add in the collection? Personally, I did not want to add Holocaust-denying books. That was offensive to me. Did I think we needed them? Sad to say, yes,” said Pearl, a nationally known librarian, according to a livestream of the panel viewed by Jewish Insider. “But we talk about — we’re anti, we shouldn’t ban books. It’s much more nuanced and it’s much more difficult than one often tends to think that it is.”

The conversation centered on how librarians and authors should respond to attacks on books that offer a more critical approach to the teaching of slavery or racism in the U.S. It was connected to a national campaign called Unite Against Book Bans, a partnership of more than 40 organizations including several major publishing houses, the American Federation of Teachers, prominent literary nonprofits and the ALA, the world’s largest library association with more than 57,000 members.

Later in the discussion, Reynolds returned to Pearl’s comment. (She later walked back her remarks, telling JI in a statement: “If I were buying books for a library I would not buy books that deny the Holocaust.”)

“When you said it, it kind of hit me in the gut, like, oof — when we were talking about people who…Holocaust deniers, right, and books written by Holocaust deniers, immediately my knee-jerk reaction was, like, that feels dangerous,” said Reynolds. “The truth is, the hard truth, is that if we are going to unite against book bans, it includes all the books, and I think that’s what makes it a complicated gig.”

On social media and in conversations with JI, writers and librarians sharply criticized the idea that opponents of book-banning must necessarily also allow books that deny the realities of the Holocaust.

“I have respect for Jason Reynolds as a force, and that’s why I think it’s extra dangerous that he said it,” said April Powers, the former diversity chief at the Society of Children’s Book Writers and Illustrators (SCBWI), a leading membership organization for children’s book authors. “Just that little snippet, someone’s going to say, ‘Well, Jason Reynolds said, we should have this book.’ My hope is he doesn’t look at it that way.”

The discussion at the ALA conference came one year after Powers stepped down from her position at the publishing nonprofit following a barrage of criticism from anti-Israel writers, sparking a conversation about antisemitism in the world of children’s literature, or “kidlit.”

Under Powers’ leadership, SCBWI issued a statement condemning antisemitism in June 2021 in the wake of a wave of harassment and physical attacks directed at U.S. Jews. Her post received criticism for not mentioning the plight of Palestinians — even though the statement also did not mention Israel or the Israeli-Palestinian conflict.

In a conversation with JI on Monday, Powers bemoaned the lack of public support she received from Jewish writers last year. “I know that they’re afraid of getting canceled and not published. But if we don’t start speaking out, this silence alone will kill us,” she said. Several Jewish writers told JI last year that they did not want their name associated with Israel for fear of professional backlash.

Powers, who still works as a DEI (Diversity, Equity and Inclusion) consultant, has avoided the kidlit field since the events of last summer, which left her traumatized in the wake of death threats and social media vitriol. In the year since, the writer who led the online crusade against Powers has moved up in the publishing world; in March, she signed with a literary agent.

“It’s important for you to know that in the progressive spaces, we’re being asked to leave, and we’re leaving in record numbers,” Powers said earlier this month at the American Jewish Committee’s Global Forum in New York. “We can’t leave. We cannot.”

Matthew Good, a middle school librarian and Holocaust and human rights educator in Lancaster, Pa., said that many of his students are unfamiliar with the Holocaust, so he has to teach them the historical reality of what happened, and how Jewish communities in Europe responded and resisted at the time.

“As librarians we’re trained to develop a collection that provides multiple perspectives on a subject or on a topic. So when you’re talking about something like the Holocaust, denial isn’t a perspective. That’s a form of antisemitism, a form of hate speech,” he told JI. The “multiple perspectives” he teaches are historical in nature: how Nazi perpetrators and German bystanders decided to act or not to act, or the difference in how individual Jews in Europe felt and acted at the time.

Good, a public school employee, does not have unlimited resources.

“​Libraries have very finite budgets to begin with, and so wanting to spend money on something that denies a factual historical event is, in my view, unconscionable, because it just gives credence to deniers and to white supremacists,” explained Good, who did not attend the ALA conference but spoke to people who did.

“Disinformation is inconsistent with professional library collection development practices that have made libraries trusted community resources,” said Hines. An exception is made, she said, when research libraries or academic libraries “may decide to retain certain texts containing disinformation strictly for the purpose of researching disinformation,” such as in the case of a doctoral student researching the proliferation of Holocaust denial.

Jewish librarians agreed that the topic belongs in research settings, but questioned whether such comments would ever be made about other minority communities with deep-rooted historical trauma.

“Is there another minority that the library community would even think about allowing books denying their suffering or calling it a hoax to be part of a publicly accessible collection?” asked Kathy Bloomfield, president of the Association of Jewish Libraries, who noted that she had not seen the panel discussion but followed the conversation on social media. “We understand and support the research value of these texts, but we are concerned about providing decontextualized access to these hateful and false materials.”

In her statement to JI, Pearl, who is Jewish, strongly condemned Holocaust denial, while noting that the issue of book banning is nuanced.

“I find it both dangerous and abhorrent that anyone would deny the Holocaust,” said Pearl. “Let me also say that the subjects of book-banning and intellectual freedom are complex and complicated issues for librarians, as well as for our country.”

Her intent at the event “was to ask the question, what about the banning of books that we find deeply offensive or objectionable? That’s a much more difficult and complex issue,” she said. “I do not believe that all books should be on library shelves.  Rather, I believe that libraries are curated by librarians, trained professionals who know and respond to the communities they serve. There should be no local, state or national laws that ban books.”

Liza Wiemer, an award-winning author whose book The Assignment addressed the teaching of the Holocaust, told JI that she had a productive conversation with Reynolds about his comments.

A spokesperson for Reynolds did not respond to a request for comment. He responded to Bogan in a tweet on Saturday, writing, “I agree that neutrality plays into the nonsense, and I wish we had ANY other example, but I was just trying to wrestle with how slippery it feels in either direction.”