‘I told Erdogan that I believe all of us, the children of all religions in the Middle East, can and must live in peace,’ Herzog told members of the city's Jewish community 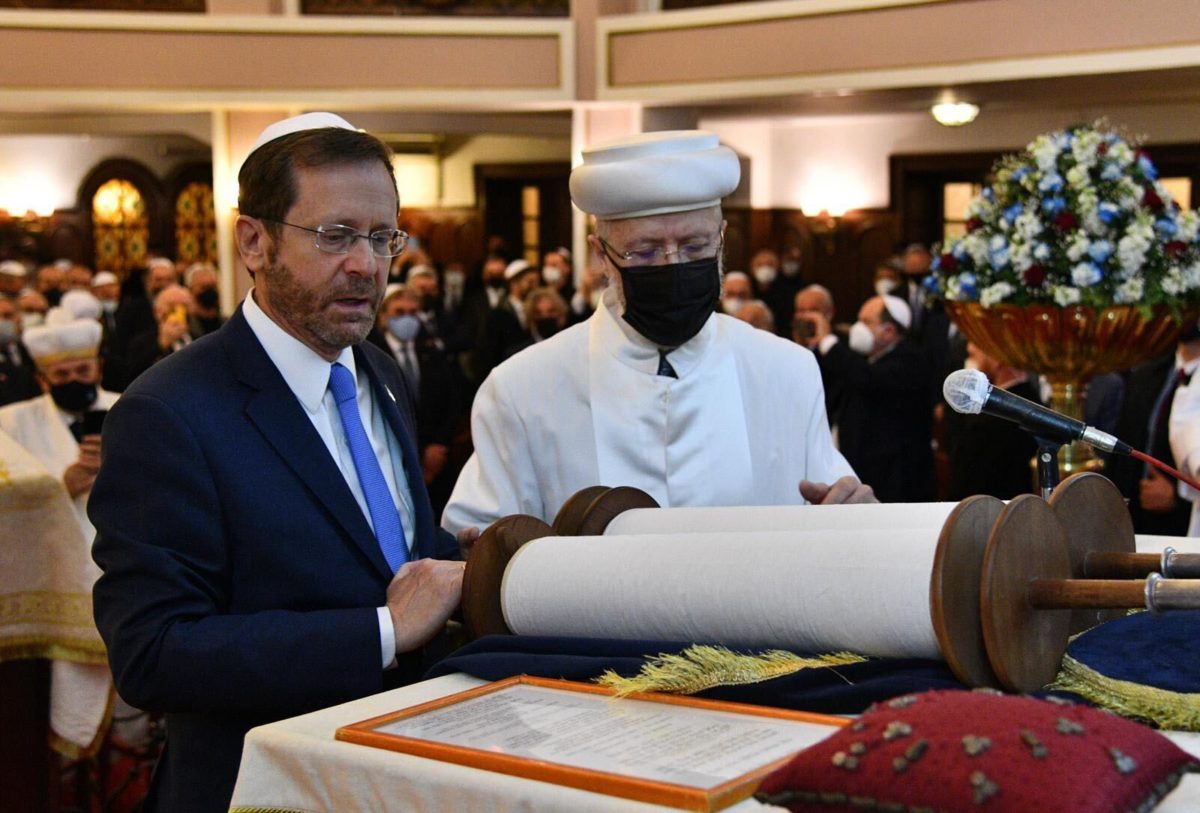 ISTANBUL, Turkey — Perhaps the most moving moment of Israeli President Isaac Herzog’s lightning-quick trip to Turkey to repair relations with Turkish President Recep Tayyip Erdogan was the warm welcome he received on Thursday morning from representatives of the Jewish community at the Neve Shalom Synagogue in Istanbul.

Shofars sounded as Herzog entered the 70-year-old synagogue, which has endured at least three significant terrorist attacks killing dozens of worshippers over the years. He shared with representatives of the 15,000-strong community details of what he described as a productive meeting with Ergodan the day before in Ankara.

The Israeli president, who, since taking office last July, has become a force in international diplomacy, according to observers, also told journalists that the visit was a first step in repairing ties between the two countries. Those relations have been strained for much of the past decade over disputes arising mainly from Israel’s actions and treatment of the Palestinians.

“This was an important and symbolic visit for both countries,” Herzog said. “Relations between our countries have faced ups and downs, with challenges that were not easy.”

He described how the two leaders had discussed a broad range of geopolitical issues, including Russia’s invasion of Ukraine and the potential renewal of the nuclear agreement with Iran, economic issues such as the flow of natural gas from the Mediterranean to Europe and other subjects of mutual concern. Herzog also said he and Erdogan reached an agreement to establish a mechanism that would work to avoid such disputes and breakdowns in diplomacy in the future.

The synagogue in Istanbul, with its striking dome ceiling, graceful arches and centerpiece chandelier, was the final stop for Herzog, who was accompanied by his wife, Michal, before returning to Israel on Thursday afternoon. The two were welcomed by Chief Rabbi Hakham Bashi Ishak Haleva, who recited the prayer for the State of Israel and invited Herzog to read from the Torah. Also present at the synagogue were Turkey’s deputy minister of culture and tourism, Ahmet Misbah Demircan, and Turkish Jewish community co-presidents Erol Kohen and Ishak Ibrahimzadeh.

The rabbi said that Herzog’s visit had profound meaning for the community, which has experienced years of antisemitic attacks and harassment.

“The Jewish people are one body and when one limb hurts, the whole body feels it,” said the rabbi.

After reading from the Torah, Herzog asked the community to join him in reciting a prayer for the Jewish community in Ukraine. He recalled how his father, Israel’s sixth president, and his grandfather, Rabbi Yitzhak HaLevi Herzog, the former chief rabbi of Israel, both described Turkey as a country that “opened its gates and heart” to Jewish people who were expelled from Spain in the 15th century.

In his remarks at the synagogue, Herzog said his meeting with Erdogan had been “good and open.”

“We had an honest conversation,” Herzog relayed. “I told him how important the Israel-Turkey relationship is to me. I told him that I believe that all of us, the children of all religions in the Middle East, can and must live in peace.”

Herzog continued, “I was pleased to hear he agrees with me, and that he too thinks that regional stability is very important and that we must strengthen what unites us, what unites all religions and peoples.”

During his statement to the press on Wednesday, Erdogan, who has faced accusations of perpetuating and espousing antisemitism, made reference to the rise in racism against Jews, recognizing an increase in antisemitism over the past two years due to the worldwide COVID-19 pandemic, and saying he was prepared to combat all such racism.