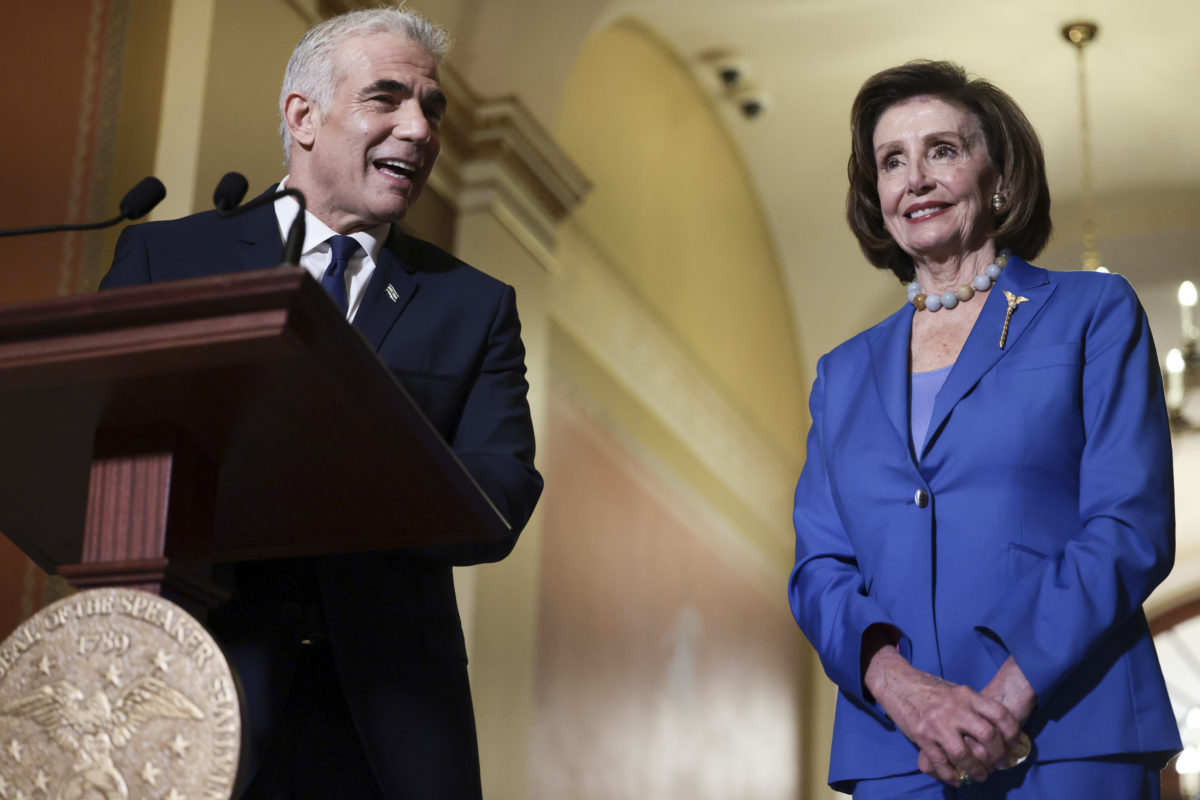 Israeli Foreign Minister Yair Lapid looks to House Speaker Nancy Pelosi (D-CA) as he gives remarks after being welcomed by her at the U.S. Capitol on October 12, 2021 in Washington, D.C.

House Speaker Nancy Pelosi (D-CA) said Thursday that she and Israeli Foreign Minister Yair Lapid clashed during their meeting in Washington last week about the value of the 2015 nuclear agreement with Iran and the consequences of the U.S. withdrawal from the deal.

“I have a good rapport with our ally. Israel is a close friend of ours, but they were still talking about, ‘What are we going to do? [Iran is] so far down the line,’” Pelosi said, recounting her conversation with Lapid. “We’re like, ‘Well, yeah, that’s why we had the agreement.’ But they just don’t seem to see that walking away from the agreement enabled the Iranians to be farther down the line.”

Pelosi’s comments came during a virtual event on Thursday organized by the Ploughshares Fund regarding U.S. nuclear policy and nuclear security. Ploughshares raised, and paid out, significant sums to activists and news organizations to support the deal in 2015, and reportedly requested $750,000 from George Soros’s Open Societies Foundation for their efforts.

The House speaker further lamented the Israeli “mobilization that was there against us,” as well as the “forces in our communities who were lobbying very heavily against the agreement” while she was working to build support in her caucus in 2015.

“Iran, since the United States under [former President Donald] Trump’s presidency walked away, has gone back to moving towards developing a nuclear weapon,” Smith said. “That is destabilizing and what the JCPOA was preventing. We still need to get back into that agreement in order to try to reduce the proliferation challenges that we’re facing from Iran.”

Rep. Ro Khanna (D-CA), a top member of the Progressive Caucus and a member of Democratic Caucus leadership, said he felt the administration hasn’t been aggressive enough in pursuing reentry, and should have been more willing to roll back sanctions to facilitate such a move. Rob Malley, the administration’s special envoy for Iran, was “kept off the field” for too long, Khanna added.

Administration officials, including President Joe Biden, have recently signaled that their patience for continued negotiations is wearing thin and that they are exploring alternative options to address Iran’s nuclear program.

Rhodes said alternatives could include increased sanctions — which he argued did not work under the Trump administration — or cyberattacks — which he said also escalate tensions — but dismissed the possibility of a military strike against Iran.

“The Biden team just took a lot of political heat to end the war in Afghanistan,” he explained. “I don’t know why they would want to then [go] back into a conflict with Iran.”

He also cast doubt on the idea of reaching a separate, more comprehensive agreement with Iran — as some senators from both parties have said they would prefer — or a “longer and stronger” deal after reentering the JCPOA, which is the Biden administration’s stated goal. He added that he believes the Biden administration has lost focus on the initial goal of getting back into the JCPOA amid its push on a more comprehensive deal.

“It’s between the best deal that you can get and no deal. The JCPOA, after years of negotiations, was the best deal that we could get,” Rhodes argued. “I understand why the administration’s messaging talks about ‘longer and stronger’… But it’s hard enough to get the Iranians back to the JCPOA. There’s not a lot of evidence to suggest they’re willing to give up elements of their ballistic missile program, for instance.”

Rhodes also said that, due to other priorities, including the COVID-19 pandemic, the administration missed “a window that might have been available” to reenter the agreement under Iran’s previous administration that may not be available under its new, more hardline, government.

The administration’s expansive legislative agenda “might make them less willing to take risks in their negotiating positions” — including unilaterally moving back into compliance with the deal — to foreclose additional possible areas of conflict with Congress, he added.

“It doesn’t seem like they’ve gone looking for that fight,” Rhodes said. “Rob Malley is doing everything he can do as the envoy… but they’ve not chosen to prioritize this at [the] nexus of politics and national security.”

Updated at 4:30PM on Friday, October 22: Following initial publication of this story, Pelosi’s office insisted there had not been a disagreement between the two leaders.

“This characterization is a complete misreading of a public event,” Carlos Paz Jr., a spokesperson for the speaker, said in a statement to Jewish Insider. “In fact, there was no clash at the meeting between Speaker Pelosi and Foreign Minister Lapid, it was a warm conversation among allied leaders where they discussed where our countries have been and where we need to go together.”