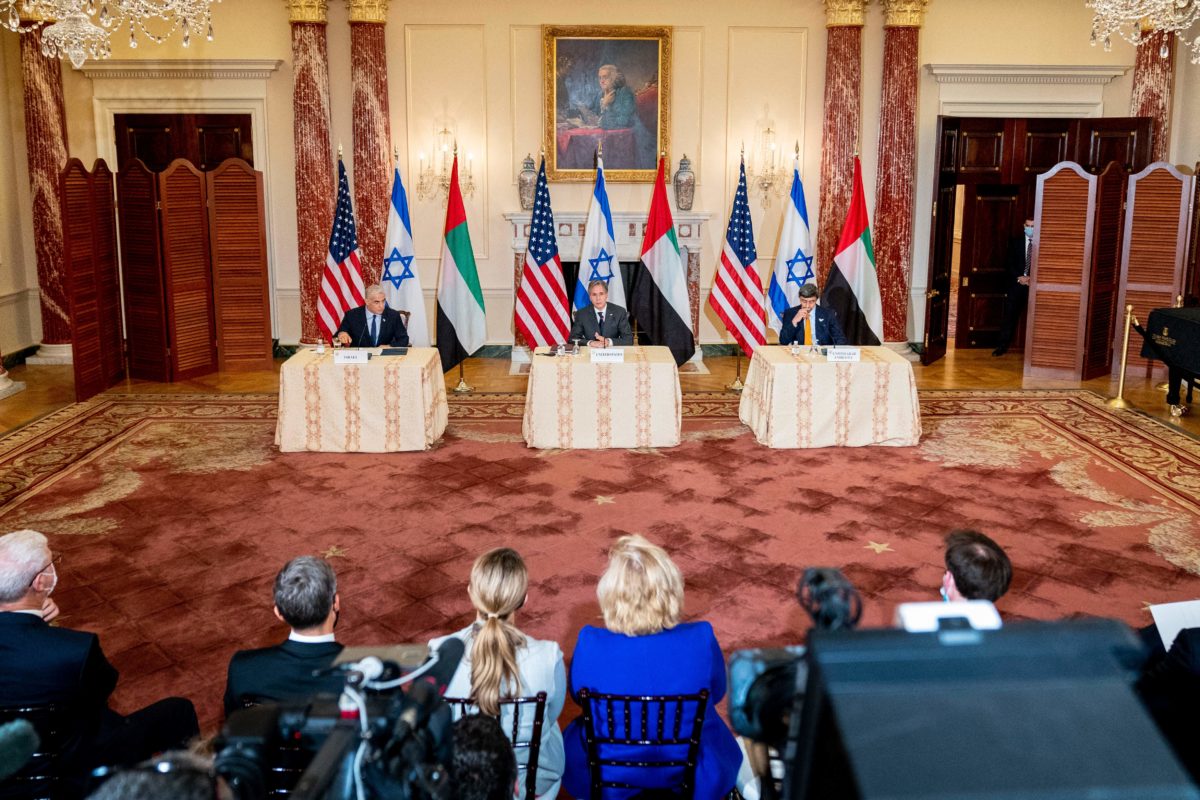 Secretary of State Tony Blinken warned in unusually blunt terms on Wednesday morning that time is running out for Iran to rejoin the 2015 nuclear deal and that the Islamic Republic has not been engaging in “good faith” with efforts to revive the deal. Should efforts to restore the Joint Comprehensive Plan of Action (JCPOA) fail, Blinken said the U.S. is “prepared to turn to other options.”

“Despite the fact that we’ve made abundantly clear we are prepared to return to full compliance with the JCPOA if Iran does the same, what we are seeing — or maybe more accurately not seeing from Tehran now — suggests that they’re not,” Blinken saidn.

“Time is running short because, as we’ve also had an opportunity to discuss together, we are getting closer to a point at which returning to compliance with the JCPOA will not in and of itself recapture the benefits of the JCPOA,” he continued. “With every passing day and Iran’s refusal to engage in good faith, the runway gets shorter.”

The secretary of state declined to set a specific date for the U.S. to abandon efforts to revive the deal, but confirmed the U.S. has prepared and discussed alternative possibilities with its allies, including Israel.

Blinken’s comments appear to reflect a growing skepticism in the Biden administration about the JCPOA’s fate.

His remarks at the press conference followed comments on Wednesday morning from U.S. Special Envoy for Iran Rob Malley at a Carnegie Endowment for International Peace event. Malley said the U.S. must “prepare for a world… where Iran doesn’t have constraints on its nuclear program” and “consider options to dealing with that.”

In a meeting on Tuesday, Lapid and National Security Advisor Jake Sullivan discussed alternatives to the Iran deal. The issue also came up during the trilateral and bilateral meetings at the State Department on Wednesday.

In his own comments, Lapid struck an aggressive tone toward Iran, comparing its nuclear ambitions to the Holocaust. Both Lapid’s father and Blinken’s stepfather were Holocaust survivors.

“Secretary of State Blinken and I are sons of Holocaust survivors. We know there are moments when nations must use force to protect the world from evil,” Lapid said. “If the terror regime is going to acquire a nuclear weapon, we must act. We must make clear that the civilized world won’t allow it… Israel reserves the right to attack at any given moment in any way. That is not only our right, it is also our responsibility.”

Wednesday’s event — the first trilateral meeting between the U.S., Israel and a Gulf state at the State Department — was driven by the Abraham Accords, which normalized relations between Israel and the UAE, as well as several other Arab states.

During the press conference, Blinken appeared to eschew the possibility of offering other Arab countries incentives to normalize relations with Israel. In deals tied to the Abraham Accords, the Trump adminitration agreed to sell the UAE advanced F-35 fighter jets, recognized Moroccan sovereignty over the contested Western Sahara and removed Sudan from the U.S. government list of countries promoting terrorism.

“The incentives are being demonstrated every single day by the UAE and Israel,” Blinken said. “And the incentives are simply this: These efforts and the normalization is profoundly in the interests of the people in the countries in question, and is providing all sorts of new opportunities, as evidenced by the extraordinary jump in tourism, the business relationships that are being built every single day, the work that our countries are doing together increasingly in a wide variety of areas.”

Bin Zayed spoke with hesitation while responding to a question about when he would visit Israel, following Lapid’s visit to the UAE in June, saying, “Well, Foreign Minister Yair was kind enough to invite me to visit Israel, and I’m going to visit soon to meet a friend, but also a partner.”

Lapid confirmed that Israel is working to expand the Abraham Accords, but offered few specifics on what additional countries might join the pact.

“First and foremost, and we’ve discussed this today at length, we want to make sure the current agreements we have will be a success story,” he said. “We are going to push forward as hard as we can on this while working on expanding the Abraham Accords to other countries, including the ones you don’t think of.”

Bin Zayed also spoke generally about “encouraging” and “broadening the opportunities” for Israeli-Palestinian peace, but did not offer details on how the UAE might use its relationship with Israel to promote such efforts.

“The Palestinians are going to be the most important element of the success of peace in the region. We cannot just talk about peace in the region without the neighbors,” he said. “I’m quite excited to see that in the last few weeks, Israeli ministers are starting to meet with the [Palestinian Authority]… I think the UAE-Israeli relationship will be not only a way of encouraging our two people, but beyond, in the region.”

During the conference, Blinken also reiterated the U.S.’s intention to reopen a consulate in East Jerusalem — which historically served Palestinians — but did not specify a timeline for that initiative.