In his new cookbook, ‘Jew-ish,’ the food writer pens a love letter to Shabbat — with his own special twists 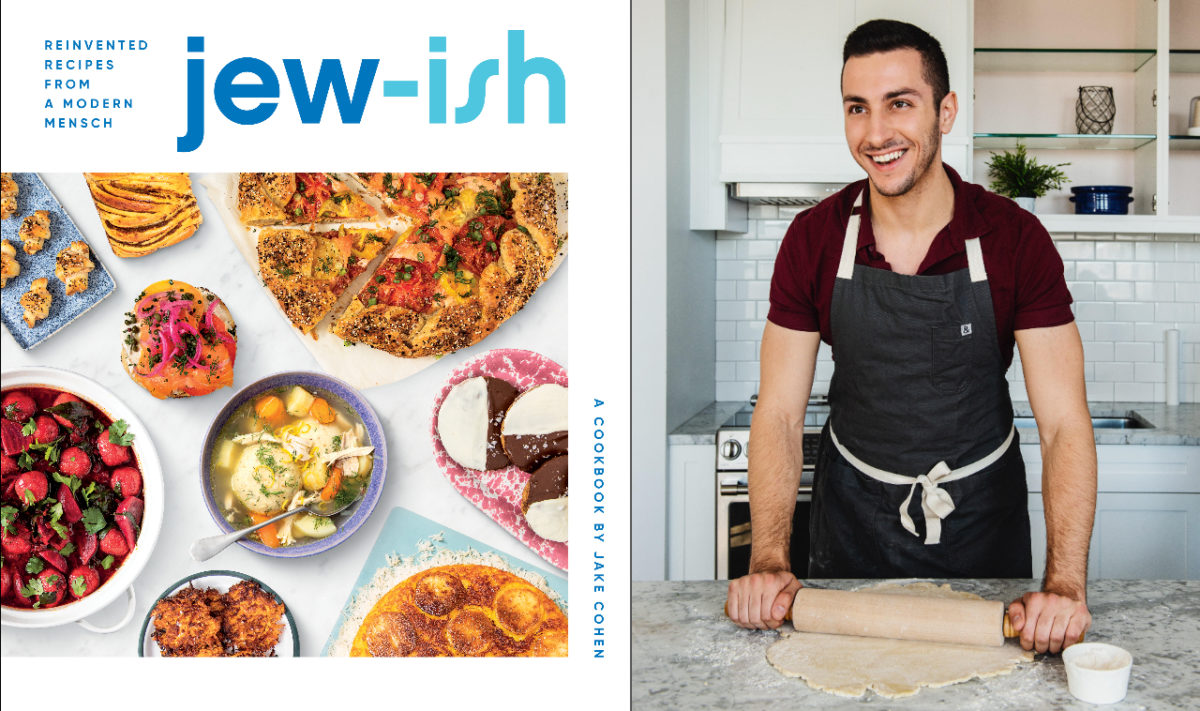 When Jake Cohen first met his now-husband, Alex Shapiro, Cohen had never tried Sephardi staples like kubbeh or tahdig. And Shapiro didn’t have any exposure to Ashkenazi soul foods like babka, gefilte fish or even matzah ball soup.

Their romantic — and culinary — union spurred Cohen, 27, to explore the disparate threads of Jewish cuisine, from French onion brisket to eggplant dolmeh, mushroom kasha varnishkes and kale tabbouleh salad. All that comes together in Cohen’s new cookbook, Jew-ish: Reinvented Recipes from a Modern Mensch, out next week.

With Jew-ish, Cohen has penned a cookbook that is at once deeply personal but effortlessly accessible. Chock-full of his signature tongue-in-cheek humor, the book explores not just wide-ranging Jewish cuisine but also issues of identity and belonging and the fine balance of tradition and modernity.

“This book is a love story, it’s a family tree, it’s everything that is representative of my journey towards a deep understanding of identity,” said Cohen.

Jew-ish is far from a traditional approach to Jewish cooking; there is saffron in the latkes, Chex mix laced with schmaltz and short ribs in a cholent recipe Cohen calls “shtetl chic.” His challah recipe yields one large loaf, though he offers a note on how to make the more traditional two, and his challah croque monsieur calls for ham, with an aside of “(I’m sorry!!).”

And Cohen wouldn’t have it any other way. “My perspective in terms of Jewish food is that you can honor those aspects while modernizing them, while bringing them into the 21st century,” he said. “The way I cook is completely representative of that. The fact is, I make cholent — but I don’t do it in the traditional way… I’m very open that I don’t keep Shabbat in that way, but I still want to make cholent, and I cook it for a few hours in the oven versus overnight.”

Cohen, a food writer based in New York City, has long been immersed in the culinary world. After studying at the Culinary Institute of America, he worked at a handful of restaurants and then took a job at Saveur magazine, followed by other gigs in food media at Tasting Table, Time Out New York and The Feedfeed.

“In high school I was one of those kids who was obsessed with watching [Food Network chefs] Ina Garten and Giada [De Laurentiis],” he said. “I started printing out recipes, began cooking… but there was never any intention of it being a career until I started inviting friends over for these little dinner parties, and it was the first time I got that kind of feeling around hospitality, inviting people into your home, cooking for others.”

But Jewish foods and Shabbat meals weren’t a major part of his day-to-day life until Cohen and Shapiro got involved with the nonprofit OneTable, which encourages millennial Jews to host their own individualized Shabbat dinners.

“I always like to say it was bashert,” said Cohen. “It’s something that my husband and I were looking for while we were trying to figure out our community in New York and understanding our Jewish identity… We started to try hosting through OneTable and it was everything. It was something that became integral to the friends that we made, our deepening connection to Jewish identity, all of it.”

Cohen — who became a OneTable board member — and Shapiro soon became known for their elaborate and well-attended Shabbat meals, including those specifically geared to the LGBTQ community. Those meals, he said, enabled him to explore his identity in a way he hadn’t up until that point.

“I’m Jewish, I’m not Jew-ish, however the way that I practice rituals, the way that I practice Jewish tradition, are where that ‘ish’ comes from,” he said. “The way I cook is all in the practice of Jewish ritual, but I never pretend that it’s completely authentic. The second that I gave myself that permission to really lean in to that aspect of exploring and experimenting… it made it quite easy to become much more proud to be Jewish, much more enthusiastic about my identity.”

But those large meals packed with friends and guests obviously came to an end when the COVID-19 pandemic hit last year.

“I was going from hosting, on average, 12 people [per week] and some bigger [meals] around the holidays” to strictly family gatherings, Cohen  told JI. “But I’m in a very lucky situation that I live in this ‘Marvelous Mrs. Maisel’ setup where I’m living in an apartment building with my mother and my sister.” And though he misses the boisterous dinners he once hosted, “there’s something really nice in having it small and focused on family,” Cohen said. “As long as everyone is present and focusing on expending gratitude and reflecting on the week — that is the core value.”

Cohen’s infectious enthusiasm and penchant for puns has helped him build a considerable social media presence, with more than 330,000 followers on Instagram and over half a million on TikTok.

But his high online profile has brought out a predictable pattern of antisemitism and hateful comments.

“It happens all the time, especially on TikTok, there’s a huge issue with that,” he said. “It sucks, it’s not fun, but I don’t let any hate online dictate what I do.”

Instead, he said, it only motivates him to serve as a proud queer Jewish role model who isn’t afraid to fully embrace his identity.

“The more powerful thing is that I continue to be authentically myself,” he said. “I find incredible passion in influencing a new generation who otherwise would probably just separate that aspect of their identity out and tuck it away instead of putting it more in the forefront.”

“This is me, this is who I am, this is how I celebrate, and I’m making it work for me and my life.”