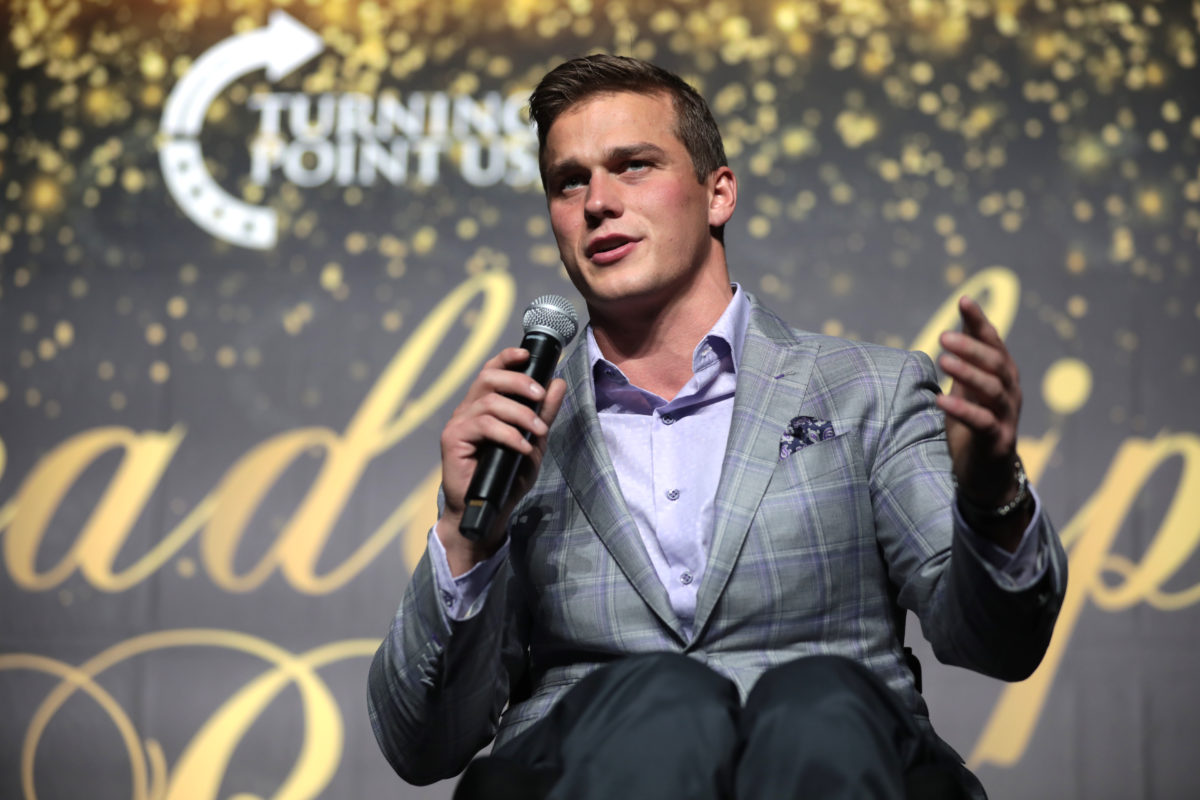 Rep. Madison Cawthorn (R-NC) met with Jewish community members at last on Monday morning, following criticism over his previous lack of outreach. What was expected to have been a tense and potentially combative conversation was, by most accounts, a respectful back and forth in which Jewish leaders expressed their unease regarding some of Cawthorn’s past controversial statements during an hour-long, in-person conversation in a conference room at the congressman’s district office in the Henderson County Courthouse

“Part of our goal is to build a relationship, and he seemed amenable to that and indicated at one point that he would like to come to services when we have them in person,” Rabbi Rachael Jackson, of Agudas Israel Congregation, a Reform synagogue in Hendersonville, N.C., where Cawthorn lives, told Jewish Insider on Monday afternoon. “No one wanted to put anyone else on the defense, which I thought was really good.”

Since August, Jackson has been leading the effort to meet with Cawthorn, who represents North Carolina’s 11th congressional district. Some of Cawthorn’s previous comments — including an old Instagram post in which he described Hitler as “the Führer” and an admission shortly after being elected that he has tried to convert Jews to Christianity — have caused consternation among local Jewish community leaders who had been seeking a venue to air their concerns with the 25-year-old first-term congressman.

“We wanted to help him understand and learn a little about the fabric of our dynamic Jewish community and why antisemitism and security are real issues of concern for us,” Rochelle Reich, executive director at Congregation Beth Israel, an independent synagogue in Asheville, told JI in an email. “We wanted to help him understand how words, and in some cases, his words, have impacted our community perception of him and why. And we wanted him to understand that even though his own intentions may have been innocent, why his words can be seen by some as feeding into the white nationalist agenda.”

Until recently, Jewish community leaders had all but given up on a meeting after several fruitless attempts, while some had decided against pursuing any dialogue whatsoever after Cawthorn spoke at a pro-Trump rally in Washington, D.C. the morning of January 6, prior to the Capitol siege. The congressman also did himself no favors in endearing himself to his Jewish constituents when, in a January 28 tweet, he invoked Martin Niemöller’s oft-cited poem, “First they came …,” in an effort to sell campaign merchandise. The message, delivered one day after International Holocaust Remembrance Day, was viewed as insensitive back home.

“That felt significant to me in that I’ve been following him very closely,” said Justin Goldstein, a scholar-in-residence at Yesod Farm+Kitchen, a Jewish-owned farm in Fairview, N.C., and a former rabbi at Beth Israel. Goldstein, who was one of five Jewish community members at the meeting, believes that Cawthorn has been unfairly maligned for his social media activity. But Goldstein hadn’t yet made up his mind as to whether the congressman was actively fomenting antisemitism or if he was unknowingly using questionable rhetoric and could be convinced to tone it down.

The tweet, he said, gave him pause. “Is this ignorance, is this trolling or is this dog-whistling?” Goldstein recalled wondering before he attended the meeting.

In late January, Cawthorn’s office began contacting Jewish community members in the district to set up a discussion and allow for such questions to be raised. Cawthorn appeared at the meeting with his fiancée, fitness influencer Cristina Bayardelle, and Hal Weatherman, his district director.

“Rep. Cawthorn had the honor of sitting down with local Jewish leaders in his district today,” Micah Bock, the congressman’s communications director, told JI in a text message on Monday evening. “He discussed how his office can effectively liaison with the Jewish community, and how he can work to serve his Jewish constituents on both a district and national level. The discussion was productive, and Rep. Cawthorn hopes to continue working together with local leaders in the Jewish community to give voice to his constituents in Washington.”

Adrienne Skolnik, who chairs the North Carolina chapter of the Conference of Jewish Affairs, said the discussion was worthwhile. “We had a successful meeting with Madison Cawthorn confirming his help in fighting antisemitism,” Skolnik, a vocal conservative who supports Cawthorn, told JI via email. “I have confidence Madison will work on behalf of the Jewish community to help us in any way he can.”

Others who attended weren’t willing to go that far. But Jewish leaders who spoke with JI said they were cautiously optimistic about the listening session. Jackson, of Hendersonville’s Agudas Israel, was encouraged when Cawthorn took accountability for his recent tweet and apologized for the oversight. “I appreciated that,” she said.

Cawthorn also committed to helping with security funding for local Jewish institutions and said he would work to bolster Holocaust education in North Carolina or at least at the federal level, according to Jackson.

When Cawthorn brought up his support for Israel, however, Jackson recalled that some attendees were quick to point out that Jewish community members aren’t so monolithic that their views on Israel are all the same. “What we can agree on is that antisemitism is bad,” Jackson remembered emphasizing.

For Goldstein, a couple of moments stood out. One, he said, was that Cawthorn was surprised when several of those in the room indicated that they had ancestors who died in or were made refugees by the Holocaust. “He seemed very moved by that,” Goldstein said. Still, he believes that Cawthorn’s reaction, however heartfelt, underscored a broader ignorance of Jewish history and culture and modern-day concerns. “He was unaware that every Jewish institution in his district has police protection,” Goldstein said.

When Goldstein informed Cawthorn that he knows some people who regard him as a white nationalist, the congressman expressed what Goldstein described as genuine remorse. “I believe that he does not want to be viewed the way that many of us have come to view him,” Goldstein said, adding that his takeaway from the meeting was that Cawthorn is still settling into his role and is learning how to occupy the position with maturity. “As of now, I will continue to give him the benefit of the doubt unless he shows me otherwise.”

Jackson agreed, with some caveats. “I am waiting to see what actually happens,” she said. “The acknowledgement of the tension that existed was there for everybody — and dispelled,” she added. But that didn’t mean everything was all of a sudden copacetic. “It’s not going to be a best-friend relationship.”