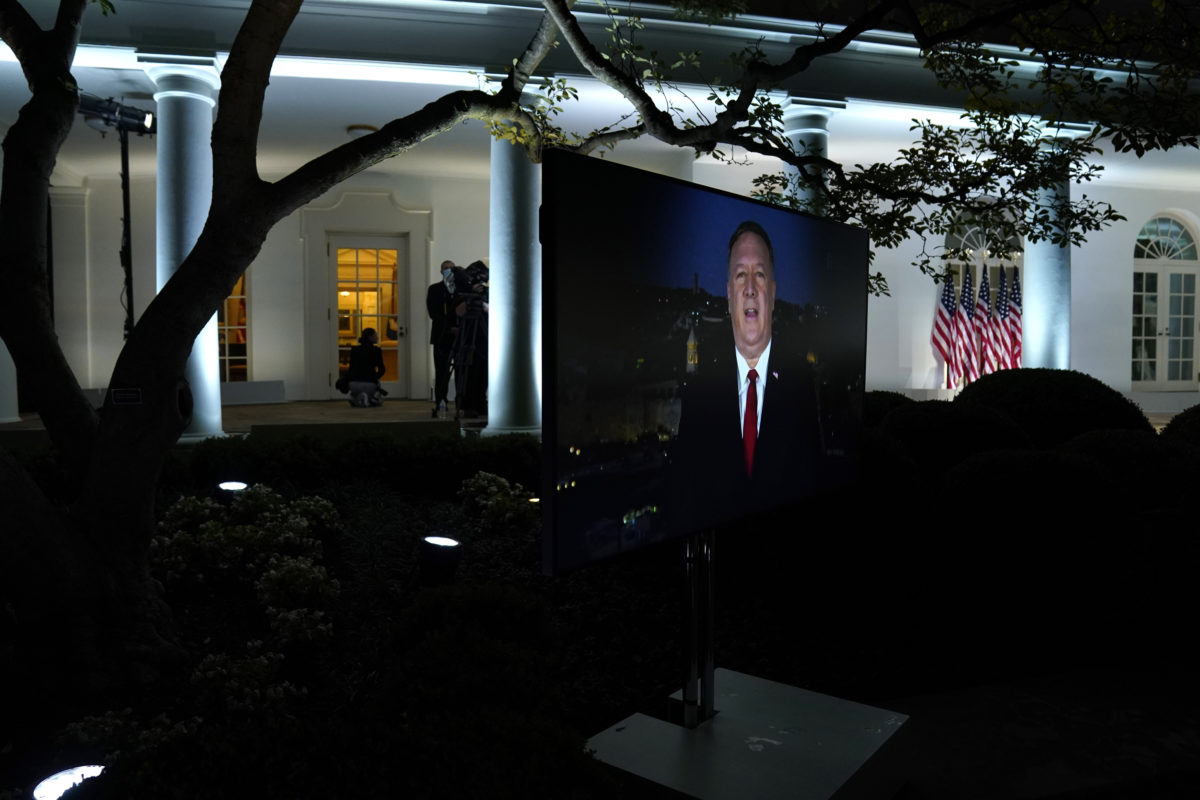 A video of Secretary of State Mike Pompeo speaking during the Republican National Convention plays from the Rose Garden of the White House, Tuesday, Aug. 25, 2020, in Washington.

Secretary of State Mike Pomeo touted President Donald Trump’s foreign policy achievements — including the the recently announced Israel-UAE normalization deal — in a pre-recorded speech filmed on the rooftop of the King David Hotel in Jerusalem on Monday.

“The president moved the U.S. Embassy to this very city of God, Jerusalem, the rightful capital of the Jewish homeland,” Pompeo said in an address to the Republican National Convention on Tuesday night, describing the venue as the “beautiful Jerusalem, looking out over the Old City.”

“And the President brokered an historic peace deal between Israel and the United Arab Emirates, that our grandchildren will read about in their history books,” Pompeo continued.

The nature of the speech and the location drew backlash from lawmakers, former diplomats and Democratic nominee Joe Biden’s presidential campaign. House Speaker Nancy Pelosi (D-CA) called it “appalling” and stressed that it is also “violating our values in terms of the bipartisanship and our support for Israel.”

The appearance of the country’s top diplomat at a political convention, along with President Donald Trump’s expected acceptance speech from the White House later this week, is a radical break from tradition for an administration that has repeatedly come under criticism for shattering long-standing decorum and traditions.

“Just because the Trump administration has broken norms does not mean that we should be any less outraged when they do it yet another time, particularly a norm as important as the United States secretary of state staying above the political fray,” former State Department official Lauren Baer, who served as a senior advisor to Secretaries of State Hillary Clinton and John Kerry during the Obama administration, told JI.

“Our ability to conduct foreign policy around the world depends upon the secretary of state being able to speak for the country as a whole, for his word being trusted as the word of America and not a word of a political party,” Baer explained. “And in taking this unprecedented. step, Pompeo fundamentally undermined that ability of a U.S. secretary of state to conduct effective diplomacy.”

Aaron David Miller, a senior fellow at the Carnegie Endowment for International Peace, posited that Pompeo is seizing on the momentum created by the Israel-UAE accord to benefit Trump’s reelection bid and potentially advance his political ambitions. “Pompeo, in an unprecedented campaign commercial with Jerusalem in background, gave Trump an A+ in foreign policy and blatantly injected himself into the 2020 elections and in process created a national platform for his own political ambitions,” Miller told JI.

A former Trump administration official defended Pompeo’s move — noting that the secretary of state was not appearing at the convention in his professional capacity —  so long as no official resources are involved. “He is allowed to participate in political activities on his own time — including letting America know that, unlike Biden, Trump sides with Israel over Iran,” the official told JI.

Baer, founder of the More Like America PAC and a one-time congressional candidate, told JI that as American Jew she finds “this kind of flagrant political move deeply disturbing” because it is a “blatant politicization of the U.S.-Israel relationship” that “threatens to undermine the traditionally-enjoyed strong bipartisan support in Washington.”

The speech is now subject to an investigation by the House Foreign Affairs Committee’s subcommittee on oversight, headed by Rep. Joaquin Castro (D-TX), who is one of three contenders for the chairmanship of the committee.

Rep. Ilhan Omar (D-MN), an HFAC member, tweeted on Tuesday, “We will see you in committee, Mr. Secretary.”