Rep. Denver Riggleman is at risk of losing his seat in the state's 5th district 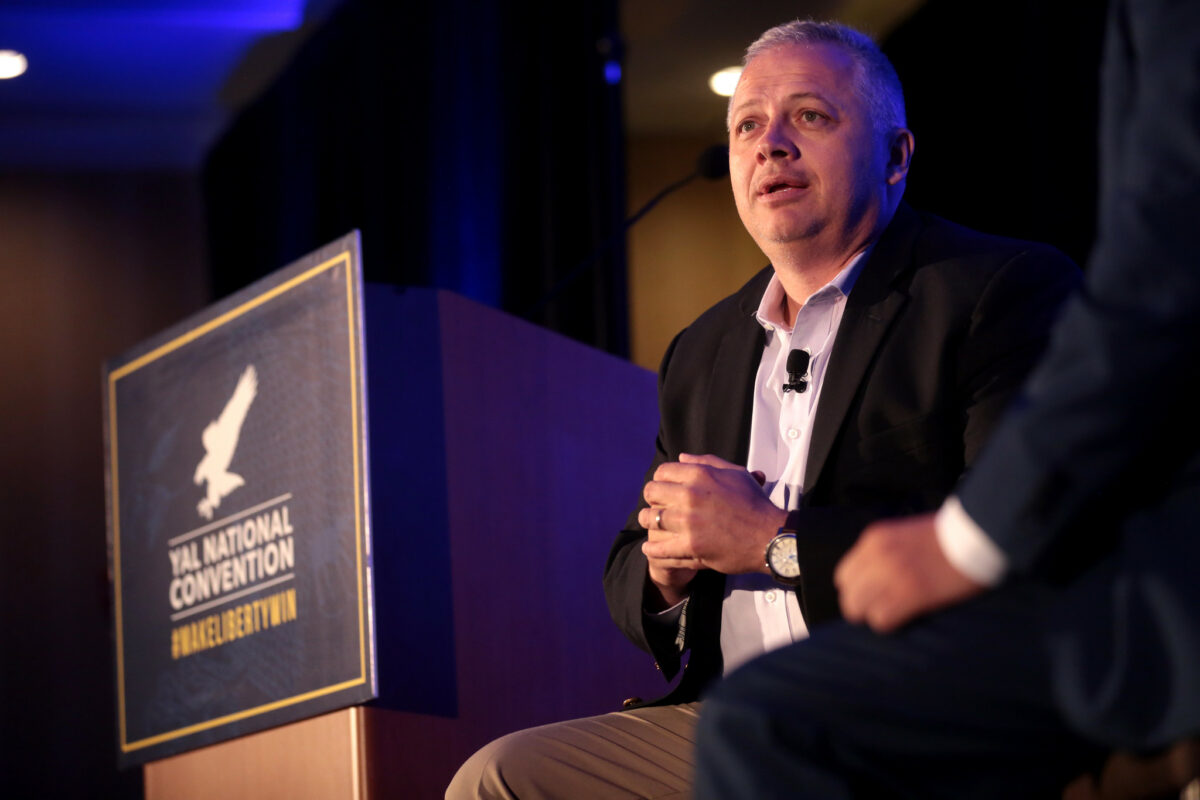 Denver Riggleman speaking with attendees at the 2018 Young Americans for Liberty National Convention at the Sheraton Reston Hotel in Reston, Virginia.

This Saturday, Rep. Denver Riggleman (R-VA) will face an unusual circumstance for a freshman lawmaker: fighting for his party’s nomination for his own seat.

Riggleman is facing a strong challenger in Bob Good, a former Liberty University official and Campbell County supervisor who is running to the congressman’s right and has drummed up support from party leaders in the 5th district. Instead of a traditional primary held next Tuesday, when voters in the rest of the state cast their ballots, Riggleman and Good will face off at a party convention on Saturday.

This year’s convention will be decidedly unconventional. Rather than a day-long gathering with speeches and discussion, the approximately 3,500 pre-approved delegates will drive through a church parking lot in Lynchburg, in the southern portion of the expansive district. The convention, originally scheduled for April 25, was delayed due to coronavirus concerns.

“If we were talking about a normal situation in another state, you’d assume the power of incumbency to be pretty strong,” John McGlennon, a government professor at Virginia’s College of William & Mary, told Jewish Insider. “Because of the nature of the convention process and adding to that the complications created by the pandemic, I think Congressman Riggleman faces a very difficult challenge.”

Riggleman’s politics lean libertarian, and he has faced strong opposition within the district over his voting record and his decision to officiate the same-sex wedding of two former campaign volunteers. Good falls more in line with the district’s evangelical conservative base, and the convention process tends to favor such candidates.

“In the last several years… there has generally been a recognition that the convention process is producing nominees who are very extreme or more extreme at least and who are chosen by the most passionate activists who involve themselves in the political parties,” McGlennon said. “Incumbency doesn’t tend to hold a lot of sway these days among party activists.”

That pattern is likely to be even more prominent at Saturday’s convention, McGlennon explained, because some delegates will have to make a round trip journey as long as six hours to cast their votes. “You have to be an even more passionate kind of supporter to take all that trouble,” he said.

Riggleman’s situation is further complicated by the route he took to Capitol Hill in 2018. That year he was selected as the party’s nominee in an emergency vote held by leaders in the district after then-Rep. Tom Garrett (R-VA) announced he would not seek re-election.

“[He] didn’t really have a strong base of support within the groups that tend to dominate the district committee and the local committees that a congressman would normally expect to have,” McGlennon told JI.

Riggleman says the local party’s decision to hold a convention is a deliberate attempt to keep him off the ballot. “They [hold conventions] to try to limit the amount of voters, so the motto they really live by is ‘Keep it small and control it all,’” he told Jewish Insider in late April. “If they have a candidate they can’t control or somebody who they don’t think is far-right enough, they’ll try to run conventions to get that person out.”

Good’s campaign said it would not grant interviews or respond to questions in the final week of the primary, and Riggleman did not respond to requests for comment.

Riggleman has made several unsuccessful attempts to push the local party committee to adopt a more open primary process or alter the convention’s format. Most recently, his campaign tried to move the convention from the church — which is several miles from Good’s home — to another location in the district.

Riggleman also complained that three Good campaign staffers — two of them paid — are members of the 5th District Republican Committee and cast the deciding votes against another of Riggleman’s attempts to alter the convention process, according to the Roanoke Times. Such behavior is not banned by committee or state GOP rules. A former Riggleman staffer is also a committee member, but is no longer being paid by the campaign, campaign consultant Jimmy Keady told JI last month.

McGlennon explained that it’s not unusual for campaign members to be involved in district party committees in Virginia. “It’s a frustration that you feel like the deck is stacked against you, but it is not uncommon,” he said.

Riggleman is popular in the Jewish community both within his district and nationwide. Republican Jewish Coalition executive director Matt Brooks described Riggleman as “one of our favorites,” and the group’s PAC has donated nearly $7,500 to the congressman’s campaign. He also has the backing of Pro-Israel America, which praised “his strong record of support for the U.S.-Israel relationship in Congress.”

On the Democratic side, voters in the 5th district will select their nominee in a June 23 primary. Candidates include R.D. Huffstetler, Claire Russo and John Lesinski — all of whom are Marine veterans — and physician and former White House fellow Cameron Webb.