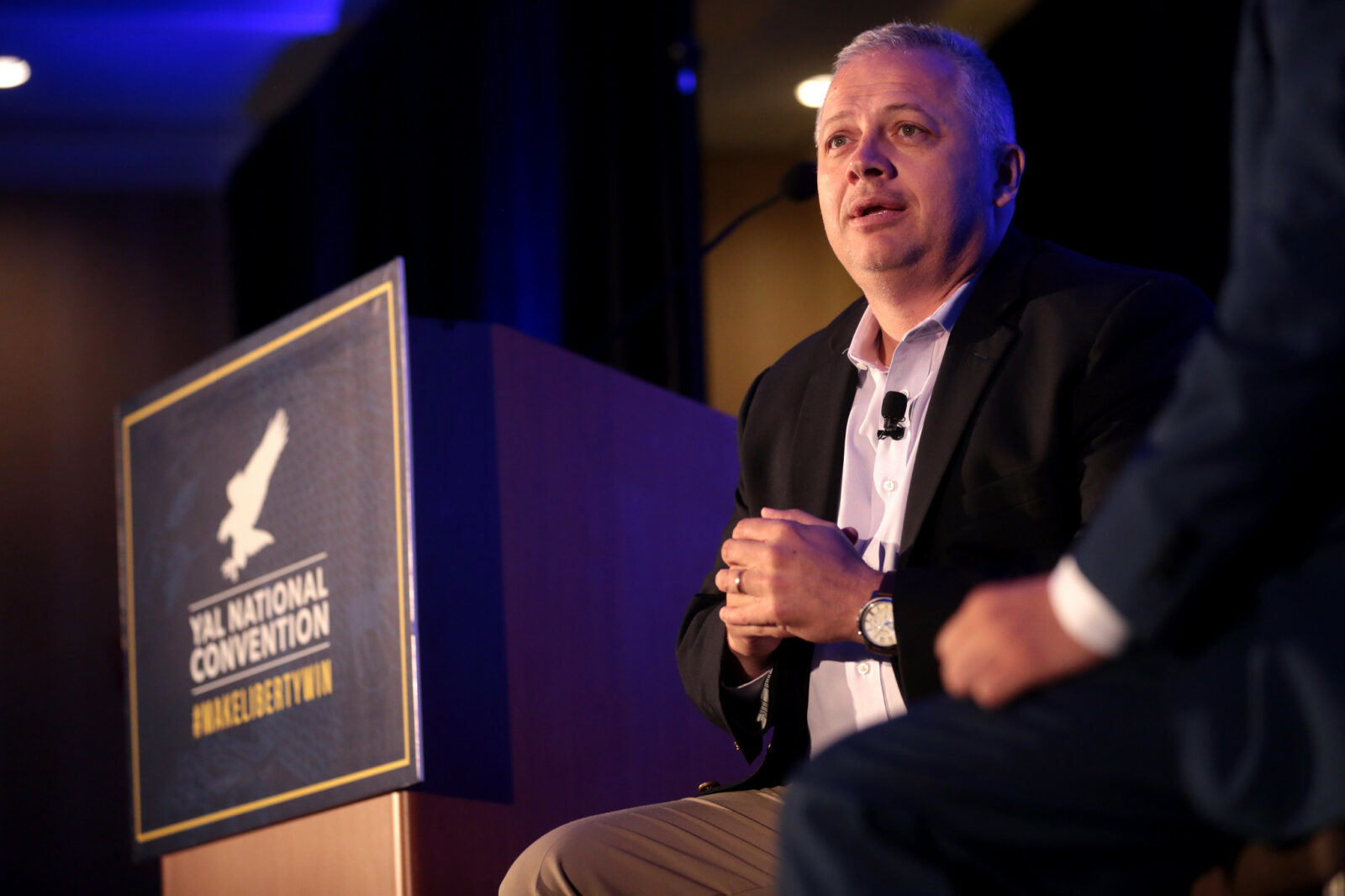 A Virginia congressman, popular in the Jewish community, is fighting the local GOP for his political life

Rep. Denver Riggleman is backed by Pro-Israel America and the Republican Jewish Coalition as he faces a tough primary process

Rep. Denver Riggleman is only midway through his first term in office, but he’s already in the fight of his political life.

Riggleman, who represents Virginia’s mammoth 5th district, which stretches across a good portion of the state and includes Charlottesville and Lynchburg, is facing off against a Republican primary challenger — Campbell County Supervisor and former Liberty University official Bob Good. The winner of this contest will then face another tough battle in November — the district is already being targeted as a potential pick-up by the Democratic Congressional Campaign Committee.

The Virginia congressman is an unconventional politician in an unconventional district. An Air Force veteran, Riggleman and his wife opened a whisky distillery in 2014. In 2016, he launched his first unsuccessful bid for public office, dropping out of Virginia’s gubernatorial primary only months after he entered the race. A year later, another opportunity surfaced: First-term Rep. Tom Garrett (R-VA) announced he would not seek re-election as he sought treatment for alcoholism.

In a hastily put-together Republican Committee meeting during the spring of 2018, Riggleman was selected to replace Garrett on the ballot, besting half a dozen other candidates. Riggleman went on to defeat controversial Democratic nominee Leslie Cockburn 53-47% in November 2018.

Good is running to Riggleman’s right at a time when the congressman is facing mounting pressure from within the party. The Rappahannock County Republican Party censured Riggleman last September for “abandoning party principles,” citing votes on fiscal spending and immigration. In addition, Riggleman was criticized by some in his district for officiating the gay wedding of two former campaign volunteers. The Cumberland County Republican party passed a vote of no confidence over his role at the wedding and Riggleman has claimed the Rappahannock County censure vote was actually about the wedding as well.

Riggleman, in turn, is accusing local Virginia Republican officials of colluding with Good to deny him the party’s nomination in his re-election bid.

Good shot down the claims, telling JI that Riggleman is a “purple progressive” who has “been rejected by his own party.”

Yet Riggleman has maintained the support of major national Republican figures. President Donald Trump endorsed Riggleman in December, tweeting that the first-term congressman is a “true CONSERVATIVE leader.” Liberty University President Jerry Fallwell Jr. — Good’s former boss — also endorsed Riggleman, calling him a “champion for our conservative values.” And Rep. Andy Biggs, chair of the House Freedom Caucus, has thrown his support behind the incumbent as well.

Riggleman’s position on Israel — in addition to other foreign policy and national security matters — has made him popular in the Jewish community. “He’s one of our favorites and one of our top priorities right now,” Republican Jewish Coalition Executive Director Matthew Brooks told JI. “He’s been a terrific leader and an outspoken supporter of the issues we care about.”

The RJC’s PAC plans to donate the maximum possible amount to Riggleman, and affiliates around the country are raising money for his primary campaign, according to Brooks. The RJC wants to “make sure he has the resources to beat back the primary, and we’re confident he will,” Brooks said.

Riggleman says he first “fell in love with Israel” when he visited in the mid-90s while serving in the U.S. military. “The way I was treated there was just incredible… It’s hard not to support Israel when you see the people, when you understand the culture, but also when you go to the country and see the geographic challenges,” he added.

Pro-Israel America, which has endorsed dozens of candidates and incumbents in both major parties this election cycle, is planning to announce its endorsement of Riggleman.

Pro-Israel America’s PAC will also be donating to Riggleman’s campaign, and the organization is confident he’ll emerge successful from the primary process.

In spite of the national-level support, Riggleman is concerned that local politics may keep him off the ballot in November. Republican officials in the district are holding a nominating convention instead of a traditional primary. Originally scheduled for April 25, the convention was delayed due to concerns over the novel coronavirus, and officials have not yet announced a new date.

This year marks the first time in over a decade that the district’s incumbent representative has faced a challenge from within the party — and only the second time in a decade that the decision will be determined by a convention, rather than a primary.

The district’s Republican committee voted this year to hold a party convention process — where only pre-registered delegates can vote and all voting takes place at a single location.

Melvin Adams Sr., who chairs the district’s Republican party, told JI the committee commonly runs conventions with the goal of “engaging Republicans with our party and empowering them to select our nominee.” Since Virginia holds open primaries, he said, “conventions not only help our party connect with local Republicans, it helps keep the Democrats from picking our nominee.”

Riggleman lambasted the convention process as corrupt and part of a rigged system designed to boost the committee’s preferred candidate. “They [hold conventions] to try to limit the amount of voters, so the motto they really live by is ‘Keep it small and control it all,’” he told Jewish Insider. “If they have a candidate they can’t control or somebody who they don’t think is far-right enough, they’ll try to run conventions to get that person out.”

Riggleman knows he’s not the top choice of most local party leaders. He’s accused Adams of pushing a pay-to-play scheme to expand the committee’s influence, something Adams denies. Good told JI that 62% of the currently registered convention delegates have signed up through his campaign, and he anticipates they will vote for him.

As Riggleman fights for his political future, he’s also facing a more immediate battle: keeping constituents safe and healthy amid the coronavirus pandemic. His family has converted their distillery’s operations to focus on producing hand sanitizer. The distillery has distributed more than 400,000 oz. of the antibacterial solution to the community in recent weeks.

The project began because Riggleman’s two pregnant daughters, both due in July, could not find hand sanitizer in stores, he said. After the family offered up extra bottles on Facebook, requests came pouring in from medical facilities and emergency services.

“It’s great to serve others,” he said. “Just the other day, I went to the University of Virginia hospital, and there was our sanitizer at UVA hospital, because they had run out… I think that’s what makes me feel the best, is when you serve others”