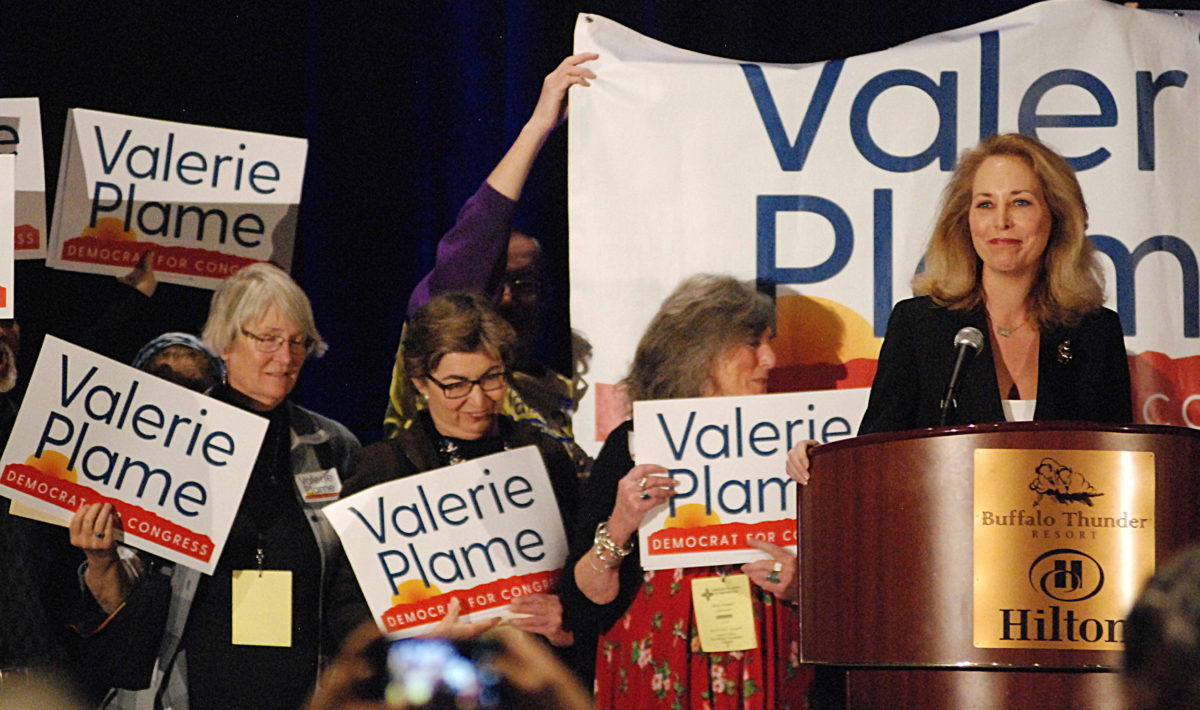 In a New Mexico congressional race increasingly reliant on political advertising, various groups are throwing hundreds of thousands of dollars into ads, with markedly different approaches.

David Krone, who worked as former Nevada Sen. Harry Reid’s chief of staff, has poured more than $300,000 into the 3rd congressional district race through two groups, Perise Practical Inc. and Avacy Initiatives Inc., in a series of positive ads for Teresa Leger Fernandez, the progressive attorney who is vying to succeed outgoing Rep. Ben Ray Luján (D-NM) in the crowded primary election scheduled for June 2.

The Congressional Hispanic Caucus’s Bold PAC, chaired by Rep. Tony Cárdenas (D-CA) and of which Luján is a member, has also spent $425,000 in advertising to support Leger Fernandez.

Meanwhile, another group, the Alliance to Combat Extremism Fund, a nonprofit organization based in Washington D.C., is targeting Democratic congressional candidate and ex-CIA spy Valerie Plame with a smaller ad buy, including a series of harsh negative attack ads that will be released later this morning. The ads, in English and Spanish, highlight controversies from Plame’s past.

In 2017, Plame posted a link to an antisemitic article published on a white nationalist website titled “America’s Jews Are Driving America’s Wars,” defending the piece as “very provocative, but thoughtful.” Plame’s campaign has also come under scrutiny for accepting donations from former Rep. Pete McCloskey (R-CA), who has been accused of Holocaust denial.

ACE Fund president Ian Sugar said he believed the actions described in the ad disqualify Plame from running for office. “People who make statements like that, as recently as 2017, are not qualified to be the Democratic candidate for Congress,” he told Jewish Insider.

Sugar declined to disclose who is funding his efforts and said he did not rely on focus groups to inform the ads’ release. He said the low-six-figure ad buy would start with Facebook and also include ads on Telemundo, Univision, Spanish-language radio and traditional cable in English.

Still, local observers and activists believe the ads — which superimpose a pair of swastikas onto Plame’s eyes — are over the top.

“Any personal attack ad, such as this one against Valerie Plame as a white supremist ally and anti-Mexican, is abhorrent and has no place in our democracy,” said Ron Duncan Hart, the former president of the Jewish Federation of New Mexico.

Lance Bell, president of the Jewish Community Council of Northern New Mexico, echoed that sentiment, while noting that he had already made up his mind to vote for Fernandez, who has won over Santa Fe’s tight-knit Jewish community. “I do not like this ad, it’s scary,” he said in an email, adding that the ad felt like a “scare tactic.”

“This ad is nothing more than an attempt to solicit attention so they can hit people up for money,” charged a Democratic operative working on behalf of another candidate, who was not authorized to speak on the record. “Have they polled? Done focus groups? How arrogant of them to just think this type of ad is the best way to defeat Valerie Plame… Maybe if they had some brains and were not simply motivated by self-promotion they might realize they might be doing damage to the other candidates in the primary.”

Plame, the 56-year-old Democratic hopeful who was notoriously outed as a CIA officer in 2003, entered New Mexico’s crowded congressional race last year, releasing an ad of her own that felt more like a car commercial or a trailer for a revenge movie than a political statement.

“I come from Ukrainian-Jewish immigrants,” she says in the voice-over. “Dad was in the Air Force. My brother almost died in Vietnam. My service was cut short when my own government betrayed me.”

Plame has made an effort to cleanse her image. She says, for instance, that she is a member of Temple Beth Shalom, a Reform synagogue in Santa Fe.

“Everybody deserves redemption if they seek it, including her, and I hope that in her journey she’s able to put aside her hateful past,” said Sugar, who added that he didn’t believe Plame was there yet.

At the state’s Democratic pre-party convention in March, Leger Fernandez secured 42% of the delegate vote. Plame, by comparison, only won 5.2% of delegates.

The most recent publicly available polling, commissioned by Plame and released in February, put the former CIA officer 10 points above Fernandez with a 21% approval rating.

Still, Brian Sanderoff, the pollster for the Albuquerque Journal, told JI in an email that he had not yet seen any independent reliable polls in the 3rd district during the campaign season.

Lonna Rae Atkeson, a political scientist at the University of New Mexico, said that advertising could have an outsized impact during an election year in which candidates have been forced to shelter in place. The ACE Fund ad, she said, is particularly jarring. “How do you break through COVID? If you put some Nazi symbols in people’s eyes and roll them around,” she concluded sarcastically.