‘We’re trying to figure out how we’re going to survive,’ says one program organizer 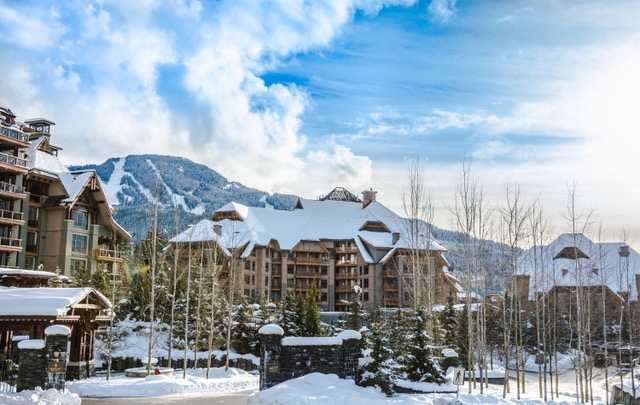 This ski resort in Whistler, British Columbia, was slated to be the site of this year's 'Pesach on the Mountain' program.

As travel grinds to a halt nationwide and hotels across the country shut their doors, luxury Passover programs have been forced to cancel, leaving program organizers scrambling to try to refund angry customers and kosher caterers shifting gears to offload excess product.

Passover programs, which have become part of a booming industry in recent years, put up high-paying guests at luxury resorts around the world, providing gourmet, kosher-for Passover meals and extensive lineups of speakers and performers. In 2017, White House advisors Ivanka Trump and Jared Kushner were spotted attending one such program in Whistler, British Columbia. High-end programs can now routinely cost more than $11,000 per person for the weeklong holiday. With widespread program cancellations due to the coronavirus, many guests, some of whom put down deposits months ago, are demanding their money back.

For some program operators the once-a-year revenue from Passover reservations has to sustain them the rest of the year. This has left some, like Ben Camille, director of guest services for Upscale Getaways, in an untenable position.

“We’re not being left with even a penny. And the thing that’s so hard is that we also have families,” Camille told JI. “I have four kids… My wife is crying every day. We’re trying to figure out how we’re going to survive. It’s very, very difficult. This is not like normal life. People are really struggling.”

“All we ever wanted to do is [create] a great experience for our guests,” he added.

Schneur Wineberg, director of Pesach on the Mountain, which is held annually at the Four Seasons Resort in Whistler, Canada, told JI his company is also reliant on Passover profits for the whole year. He and his staff will not receive salaries, he said, and the company will not make any money this year.

Pesach on the Mountain is offering guests 100% credit for next year’s booking, or cash refunds of 80% on this year’s bookings — which started at around $5,400. “We’re giving everything back,” Weinberg said.

One seasoned senior Passover program operator, who asked to remain anonymous, told JI that program insurance will not cover this type of emergency. In terms of “the amount of irrevocable expenses and damages… the customer cannot understand how severe they are in planning for a proper program,” the operator said. Operators are “left holding the bag because of nobody’s ill intentions,” he added.

The operator said his program is offering a 70% refund or a 100% credit for next year. But he added that some customers who have been aggressive in demanding refunds misunderstand the travel and event-planning industry.

“Every customer became a business and legal guru in thinking they know how this gets handled and how this plays out in the insurance world and the hotel world,” he said. He said many customers do not understand that group hotel bookings function differently from individual bookings, and that they cannot directly receive refunds for individual rooms from the hotels.

Camille told JI he’s been working with hotels — Upscale Getaways was planning to run programs at high-priced resorts in San Diego and Niagara Falls — to compensate customers to the greatest extent possible. The San Diego program cost more than $5,300 per person, and the Niagara program costs began at $3,800 for the full week.

“It’s a real company, we work all year… and all of the sudden, three weeks before Pesach, we have to turn back the clock and claw everything back,” Camille said.

Meanwhile, other programs find themselves in a “stalemate” with customers who are “truly reeling,” according to Mike Gershkovich, founder of Mike’s Bistro in Manhattan, who was hired as the executive chef for the Passover in Vail program, where refunds have not yet been finalized.

Some of the operators are having difficulties securing refunds for their customers because they have already paid vendors, employees and expenses like office and storage space. Gershkovich said he will not refund the deposit the program paid him because he spent a month working on preparing for the program before it was canceled. “That’s like payroll,” he said, adding that many other vendors are in similar situations.

Weinberg said most of his vendors are providing full refunds, while others, including performers and speakers, are offering credits for future years. But some vendors, he added, are refusing to refund anything.

Some smaller program operators may not survive this blow, since they are essentially losing the entire year’s profit, according to Dani Klein, founder of YeahThatsKosher, a website covering kosher food and travel news.

Klein suggested that the businesses that do survive will likely need to partner with more established companies going forward. Bigger programs, and those that are part of larger businesses, may survive, but may not be able to run multiple programs next year and could face difficulties with insurance.

Weinberg agreed that “next year is going to see a lot of things change,” and predicted that vendors will ask for more money — or even full payments — up front, and that force majeure clauses in contracts are likely to change as well.

Weinberg is confident that the industry as a whole will survive this difficult period, because many who participate in Passover programs see it as essential travel, not just leisure, due to the intensive labor required to make Passover at home.

But it’s not just the guests who now need to prepare their homes for the holiday. Headline speakers at the programs are usually invited to stay free of charge for the duration of the holiday in lieu of speaking fees. Author Tevi Troy, who frequently appears at Passover programs, said he had a few weeks’ notice to prepare Passover at home.

“You really have to feel bad for the people who run the programs, some of whom it is their entire income for the year,” said Troy, who was slated to speak at two programs about his new book. “I completely understand if somebody says, either we can’t refund 100% or we can’t refund immediately or we’ll give you a credit — it makes perfect sense,” he added.

Kosher caterers — some of whom cater Passover programs and others who run their own — are now stuck with large quantities of food. Some are trying to sell directly to consumers, Klein said.

Smaller caterers around the country are setting up pop-up restaurants inside local businesses, selling takeout and delivery Passover meals to consumers.

“The fact that these caterers are coming into the pop-up Passover restaurant game is telling that there’s still a demand for people to not make every single meal at home,” Klein explained. “It’s a boon for those that are able to capitalize on this current market.”

Other caterers are reselling their products to other catering companies or to supermarkets, but “every caterer has their own story,” Gershkovich said.

Disruptions to high-priced Passover travel plans have already led to legal action. New York’s Magen David Yeshiva filed a lawsuit against Eden Roc, a luxury hotel in Miami Beach, for refusing to refund a $2.3 million deposit on the school’s planned Passover trip. The school claims a contract clause allowed for cancellation in case of a “disease outbreak.”

“Some hotels have ended up in litigation with the operator because the operators had to push and the hotel wasn’t willing to budge,” the anonymous operator told JI. “The operator needed to walk a fine line between fighting for themselves and the customer and pushing too far, to the point where it becomes a litigating matter.”