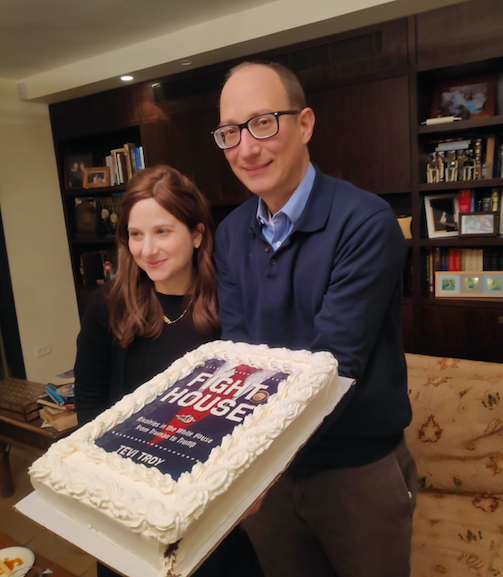 Jewish Insider: What was the impetus for writing Fight House?

Tevi Troy: There has been so much conversation about fighting in the White House recently that I wanted to look back as an historian and see what the actual history of White House infighting was. When I started to dig into it, I realized nobody had written a book on the subject, so I figured I’d be the one to do it.

JI: What was the most surprising thing you learned while researching the different relationships?

TT: I was surprised by how nasty some of the fights were. All of the people I look at are technically on the same “team.“ They all worked for the same presidents and yet they did incredibly vicious things to one another, in the form of leaking, trying to get coworkers fired, and even turning a blind eye while a colleague faced potential jail time.

JI: Are there any lessons to be learned from the book by current administration staffers?

TT: In “Fight House,” I lay out three things any administration can do to limit infighting, if they so choose: create ideological alignment internally, develop a fair process in which everybody can have their voices heard, and have the president make clear his displeasure with infighting. Easy to say, hard to do.

JI: Which of the relationships that you detail was the most consequential when it comes to Israel – in other words, was Israel an accidental bystander caught in the crossfire between any of the staffers at odds with each other?

TT: I was surprised by how many of the disagreements in “Fight House” had to do with Israel. Obviously, the most consequential disagreement was over the recognition of Israel during the Truman administration, in which George Marshall argued against and Clark Clifford argued for.  Clifford won, and Marshall never again spoke to Clifford, nor uttered his name for the rest of Marshall’s life.

JI: You shine a light on the different managerial styles of each president. What was most successful in terms of keeping West Wing strife at a minimum?

TT: No administration has been perfect in this regard, and I’m glad for that: otherwise, I wouldn’t have had material for a book. But in “Fight House” I praise a number of administrations for certain aspects of their ability to control infighting: Obama, for successfully creating his No Drama Obama reputation; Bush 41, for having a smooth running foreign policy apparatus; and Bush 43, for having a relatively leak-free domestic policy team. But there were certainly plenty of fights in each of these administrations, as Fight House details.

JI: Have you seen the way in which staffers attack each other — both privately and in the press — evolve over time?

TT: The biggest change I have seen in infighting is the rise of technology. Staffers use Signal and private text to leak without getting caught. Instead of just assigning derisive nicknames, staffers now give their rivals unflattering emojis to go along with the nicknames. Infighting is as old as human civilization, but technological improvements can make it seem new and different.