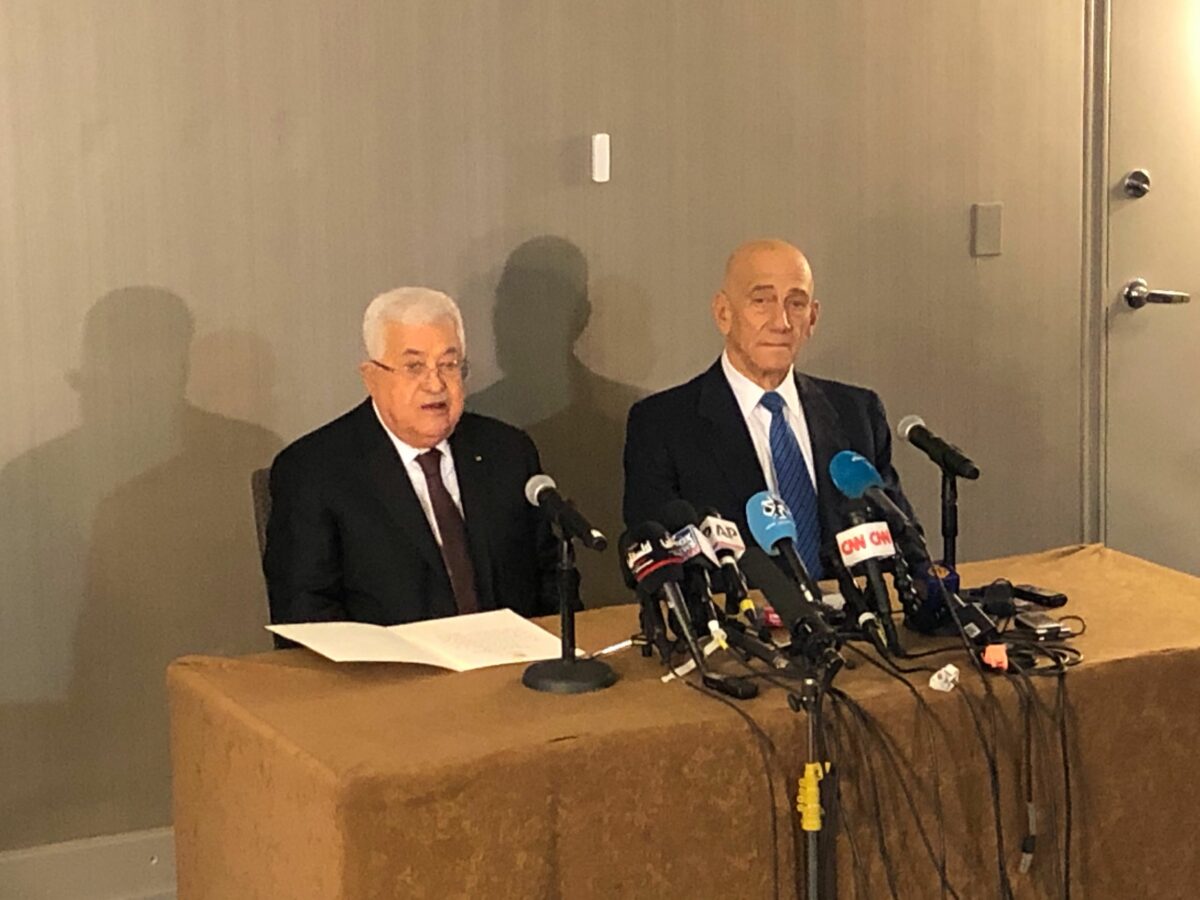 In a joint appearance with former Israeli Prime Minister Ehud Olmert at the Grand Hyatt Hotel in Midtown Manhattan on Tuesday, Palestinian Authority President Mahmoud Abbas indicated that he’s ready to return to the negotiating table with the Israeli government “under the umbrella of the international quartet” — but not on the basis of President Donald Trump’s peace plan.

Olive branch: Speaking Tuesday, Olmert — who negotiated with Abbas on the Annapolis Conference framework before leaving office in 2009 — described the Palestinian leader as a “man of peace” and the “only partner” Israel has in peace talks. Olmert stressed that his position is “widely accepted” by the Israeli people, pointing to the failure of the right to build a 61-seat majority government in the past two elections.

Glass half full: Olmert told Jewish Insider that he implored Abbas to embrace the “one basic principle” of two states as a starting point to relaunch talks. “If the principle of a two-state solution, as spelled out in a very clear way in the Trump plan, is indeed a referred commitment, and that this is the goal of a potential solution, then there should be a way to advance to negotiations on that basis,” the former prime minister explained.

Shelved for future use: Olmert told reporters that while he was disappointed Abbas declined to respond positively to his offer in 2008, “he never rejected it. I have to be honest and emphasize that he never said ‘no’ to my proposal.” Before leaving the press conference without taking questions from reporters, Abbas called Olmert a “friend” and “a man of peace,” and said he wanted to “extend my hand to the Israeli people” to resume negotiations “at the point where it ended with Olmert.”

At the U.N.: In a speech before the United Nations Security Council, Abbas blasted the Trump plan as “an Israeli-American preemptive plan in order to put an end to the question of Palestine.” The Palestinian leader held up a map of what a Palestinian state would look like under the U.S. plan and said, “It’s like Swiss cheese, really.”

Open door: U.S. Ambassador to the U.N. Kelly Craft indicated that the administration is open to changes in the plan if the Palestinians choose to engage. “This plan is not a ‘take it or leave it.’ It is not a ‘my way or the highway.’ It is not set in stone,” Kelly stressed in her speech. “Rather, it is an opening offer. It is the beginning of a conversation, not the end of one.”