state of the union 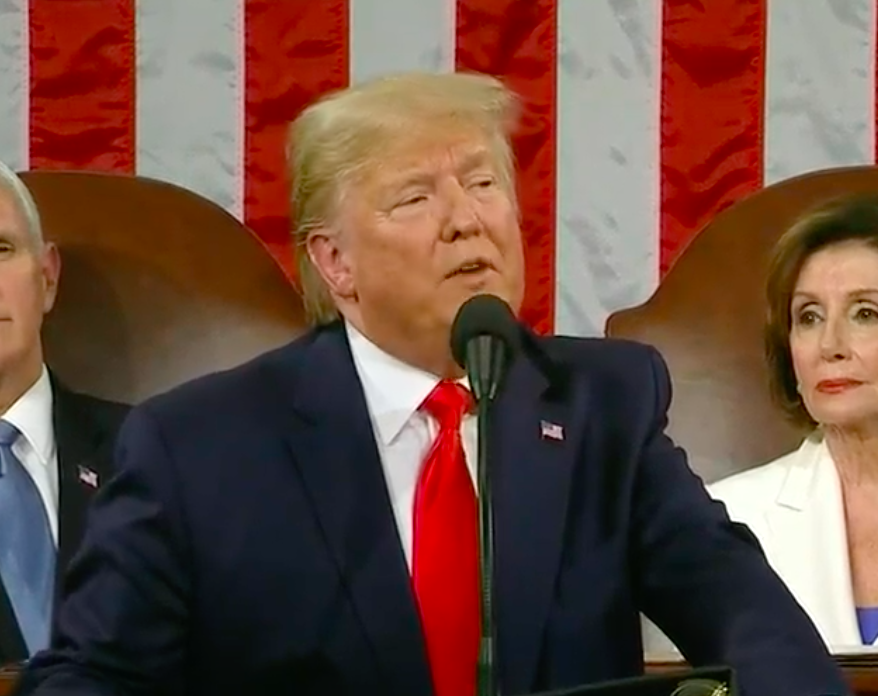 President Donald Trump hailed the state of the union as “stronger than ever before” in his third annual address to the nation before a joint session of Congress last night.

Cold shoulders: Trump declined to shake House Speaker Nancy Pelosi’s outstretched hand as he handed her a copy of his remarks. In turn, the Democratic leader left out the words “honor” and “privilege” in her introduction. Pelosi’s ultimate payback came at the end of the night, when she ripped up a copy of the speech in front of the camera. Pelosi told reporters she tore up the papers “because it was the courteous thing to do considering the alternatives.”

Peace through strength: Toward the end of his speech, Trump highlighted the targeted killings of Abu Bakr al-Baghdadi and Qassim Soleimani, and hailed the effectiveness of the “maximum pressure” campaign against Iran. According to the president, the U.S. can help the Iranians recover from a failing economy “in a short period of time,” but he suggested that their leaders in Tehran “are too proud or too foolish to ask for that help.” He added, “We are here. Let’s see which road they choose.”

A plan for peace: Trump only briefly mentioned the Mideast peace plan he released last week as a “groundbreaking plan” for peace between Israel and the Palestinians. “Recognizing that all past attempts have failed, we must be determined and creative in order to stabilize the region and give millions of young people the chance to realize a better future,” Trump said.

Missing from the speech: Trump did not mention the ongoing impeachment trial once in his 78-minute address. He also didn’t reference his executive order to combat antisemitism on campuses, or the recent violent antisemitic attacks in New York and New Jersey.

Right of return: Rep. Donna Shalala (D-FL) brought her predecessor, former Rep. Ileana Ros-Lehtinen (R-FL) as her guest to the event. “I strongly believe in bipartisanship and I practice it,” Ros-Lehtinen told JI. “I was thrilled to be in the Visitor’s Gallery for the first time while I heard President Trump’s speech.”