25,000 show up to march against antisemitism 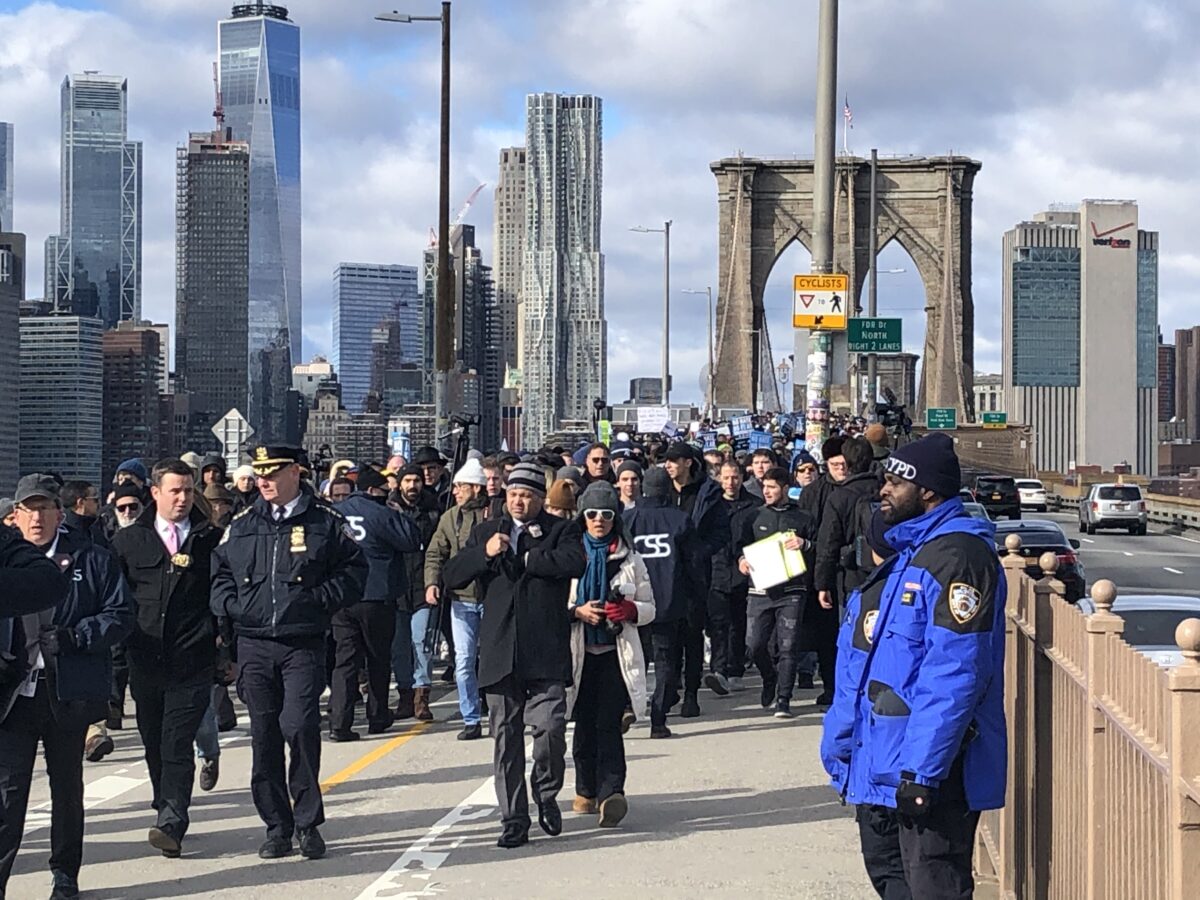 Message against hate: “The primary message of this rally is that an attack against visibly Orthodox Jews is an attack against all Jews, is an attack against all New Yorkers and against all people of goodwill,” Eric Goldstein, CEO of the UJA-Federation of New York, told JI. “We are coming from Manhattan across the bridge into Brooklyn, the scene of the vast majority of the violent incidents of antisemitism in the New York area, to say that the current environment is absolutely unacceptable.”

Stepping up: Senate Minority Leader Chuck Schumer told reporters, “We will not only speak and march, but we will act… Antisemitism, bigotry is now a national crisis. The nation must join New York in rising up and doing a lot more about it, and I aim to lead that fight.”

Walking the walk: Ahead of the march, Governor Andrew Cuomo announced an additional $45 million in funding to strengthen security measures at religious institutions and non-public schools. Cuomo also announced that state police will continue increased patrols and security in Orthodox Jewish neighborhoods across the state.

Notable attendee: Rep. Alexandria Ocasio-Cortez (D-NY) also joined her New York colleagues to rally against antisemitism. Ocasio-Cortez told Israeli Channel 12 reporter Yuna Leibzon that it was “incredibly important” for her to attend “to make a very strong and unequivocal stance against the rising tide of antisemitism” and “coming out in love, fellowship and allyship of our Jewish neighbors, brothers and sisters and community here.”

Clear message: Jonathan Greenblatt, CEO of the Anti-Defamation League, told JI’s Jacob Kornbluh that the march is “a clear message of unity” among the Jewish American community to fight prejudice and hate. “My hope is that it is an inflection point. We have seen Jews murdered in the synagogues where we pray, we have seen Jews murdered in the supermarkets [where] we shop, and we have seen Jews literally attacked in the homes [where] we celebrate, and finally, the Jewish community and the world is saying, ‘Dayenu, enough!’ Greenblatt stressed.

Wake up call: Greenblatt, who recently decried the lack of national media attention to the dramatic rise in antisemitic attacks across New York City, said that “it’s a shame that it requires dead Jews to get the attention of the press. That needs to change now.” He added, “I am encouraged by the amount of press here today, and I hope that we will see more going forward.”

Missing from the count: While several Orthodox Jewish leaders, including from the Orthodox Union and Agudath Israel, joined the march in their personal capacities (they declined to co-sponsor the event, JI learned), there was very little presence of Hasidic Jews among the marchers. Councilman Mark Levine (D-Manhattan) tweeted, “It’s a stark reminder of the work we still need to do to build bridges.” Organizers insisted that there was “significant outreach to organizations” in the community most affected by the current wave of antisemitic attacks. “But they had their considerations — whether it was fitting with their cultural and religious sensibilities,” one of the organizers told JI.

Rabbi David Niederman, a leader of the Satmar community in Williamsburg, delivered a video message to the rally goers. Chaskel Bennett, a co-founder of the Flatbush Jewish Community Coalition, highlighted the online hatred against members of the Hasidic community in his remarks at the rally. David Greenfield, CEO of Met Council, explained that per longtime custom, “the Hasidic community doesn’t attend rallies unless there is a religious component to them.”

Avi Greenstein, CEO of the Borough Park JCC, said he felt it was his obligation to represent the Orthodox Jewish community, the primary target in recent attacks, as a show of unity. “There are still bridges to build, both within and [outside] the greater Jewish community, and today was an important step in that direction,” he said.

Halie Soifer, executive director of the Jewish Democratic Council of America, tells JI, “I was happy to see Orthodox and Hasidic Jews marching alongside such a wide range of Jews (and some non-Jews) from a diverse set of backgrounds, denominations, and affiliations. Our diversity is our strength, and the message today was certainly one of acceptance and solidarity from the entire community.”

Step one: “Bridges aren’t built in one day, but we must start somewhere and we are taking a first step today,” UJA’s Goldstein said during a post-march rally at Cadman Plaza in Brooklyn. “Building bridges means putting aside political differences, putting aside — for this day — religious differences, and calling out antisemitism and all forms of hatred wherever we see it, and particularly in our own community, in our own political party.”

NeNew York Times staff editor and opinion writer Bari Weiss cited global antisemitism and the attacks in Pittsburgh, Poway, Jersey City, Monsey and Brooklyn in her speech at the rally, calling out “leaders who speak boldly while failing to take the actions necessary to protect our community.” Read her full remarks here.