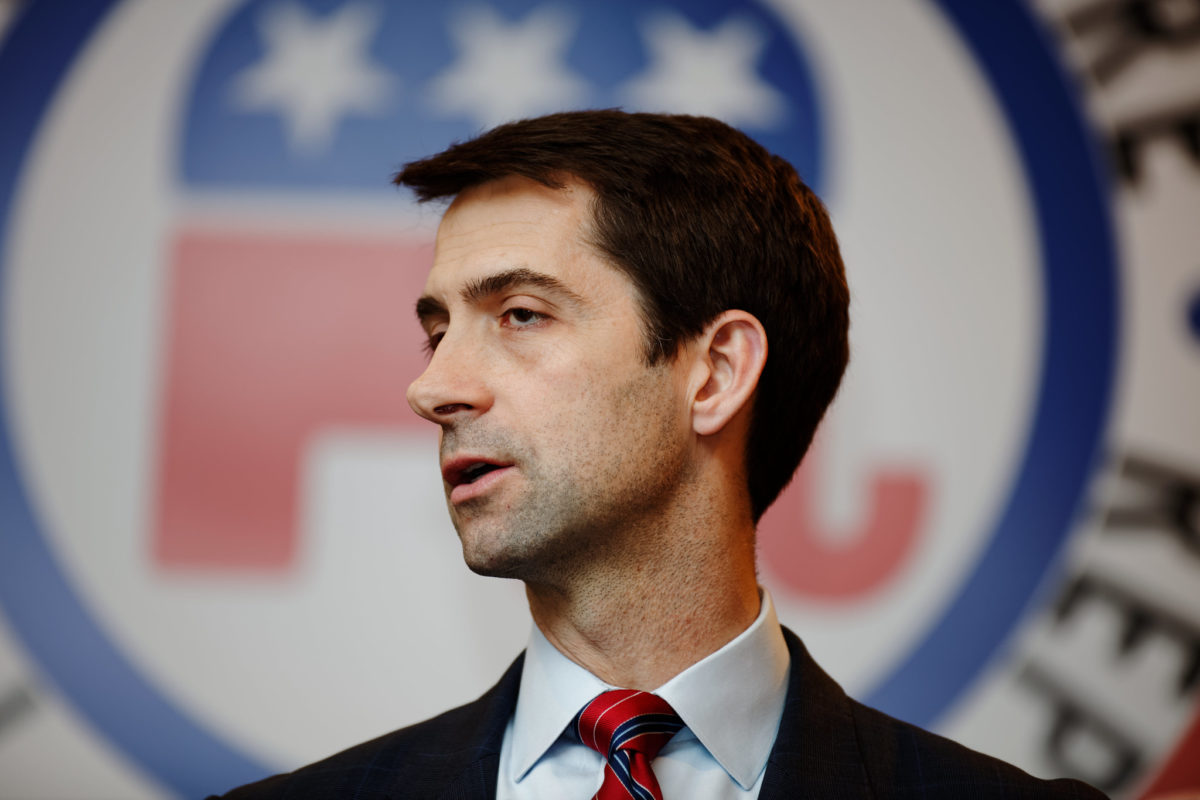 The call for military action comes amid increasing tensions with the Islamic Republic. On Thursday, Secretary of State Mike Pompeo blamed Iran for attacking oil tankers in the Gulf of Oman. On Monday, the Defense Department announced the deployment of an additional 1,000 troops to the region.

Cotton, a member of the Senate Armed Services Committee, has long warned of Iranian aggression, and was a vocal critic of the 2015 Iran nuclear deal. In 2015, the Arkansan lawmaker wrote an open letter to Iranian leaders that critics saw as undermining Obama administration foreign policy.

On the appropriate strategy for deterring Iran, Cotton said, “There are more than ample targets that can deter Iran from this kind of malicious behavior whether it’s naval bases or munition storage or refining capabilities,”

Later, Cotton clarifies that he: “‘Is not advocating for a return to a ground war or a sustained air campaign to produce regime change, like that of Obama in Libya.’ Instead he wants ‘exactly the kind of action that President Reagan took against Tehran in 1988,’ when the United States launched an attack on Iran’s navy after an Iranian mine damaged a U.S. ship.”

The advocacy comes as a return to form—“Cotton’s eyebrow-raising advocacy campaign comes after several months of lying low in the Senate after a stinging defeat on criminal justice reform and a series of instances in which he broke with Trump, typically a close ally. Cotton voted against the president’s immigration plan to reopen the government and opposed lifting sanctions on Russian companies. He also panned the administration’s plan to bring in more guest workers.

Cotton says he’ll be his own senator despite his alliance with Trump, and he often preserves his political capital for key moments like this one when the president is on the edge of a major decision. On Monday, Trump signaled his resistance to a new Middle East conflict, telling Time magazine that Iran’s attacks have been ‘minor’ and he ‘wouldn’t say’ he’s gearing up for military action.”

On the tepid response from fellow Republican senators: “In interviews Tuesday, several Republican senators itching for a more aggressive approach to Iran said they sympathize with Cotton but can’t explicitly endorse military action. Some say it’s too aggressive, some say it’s not Congress’ job to make such suggestions and others worry the president lacks the legal authority to attack another sovereign nation.”

Said Lindsey Graham (R-SC): “Sen. Cotton’s probably right, but being the moderate guy I am, I would put them on notice”…

…‘That’s a military decision that I would leave to commanders,’ said Senator Marco Rubio (R-FL) ‘You can make a compelling argument for what he’s saying that what they’ve already done reaches the basis for retaliation. He may be right.’

‘Cotton is right on. They’re the enemy,’ said Senator Jim Inhofe (R-OK), who chairs the Senate Armed Services Committee. Regarding military strikes, however, he added: ‘I’m just not going to say that’s my idea, too.’”