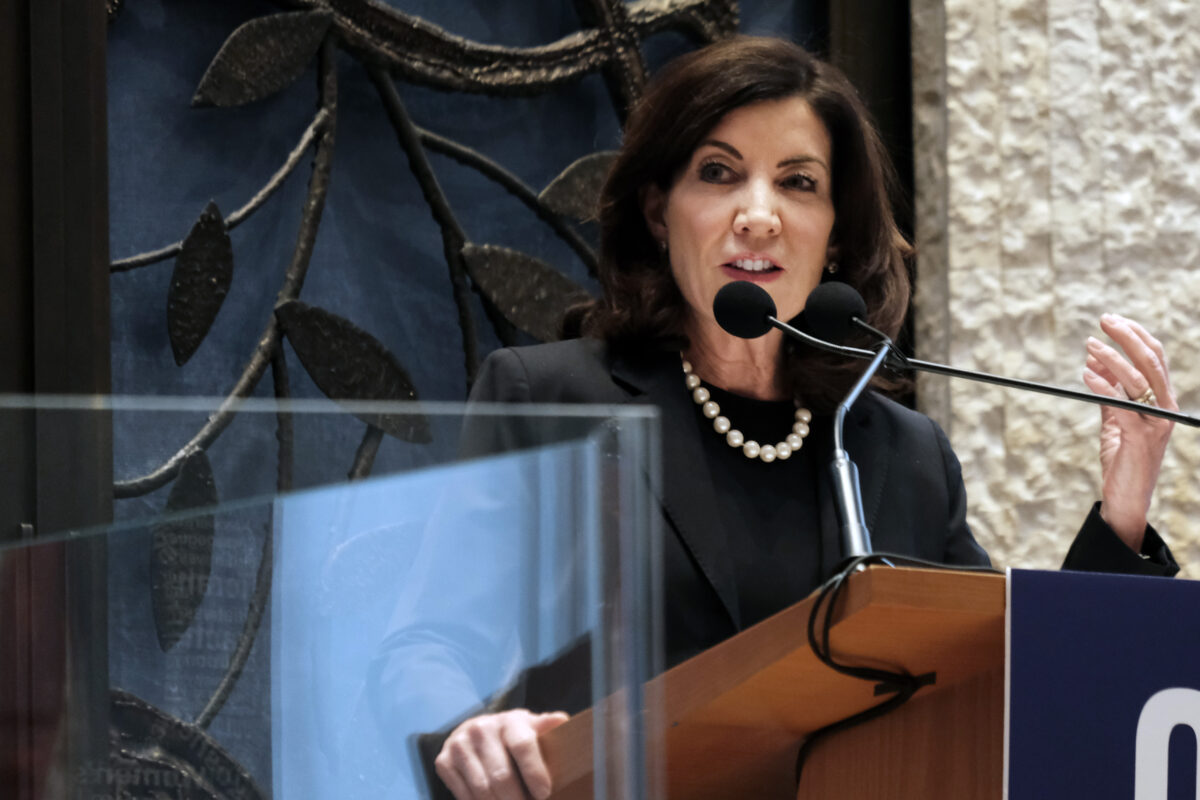 NEW YORK, NEW YORK - DECEMBER 12: New York Governor Kathy Hochul joins other politicians and Jewish leaders for a conference addressing the rise in antisemitic incidents across the United States at the Lincoln Square Synagogue in Manhattan on December 12, 2022 in New York City.

“When you attack one of us, anyone, that is picking a fight with 20 million other New Yorkers,” New York Gov. Kathy Hochul said at meeting on antisemitism attended by New York elected officials and local Jewish community leaders on Monday morning. Sen. Chuck Schumer (D-NY), New York City Mayor Eric Adams and Homeland Security Secretary Alejandro Mayorkas also attended the summit, hosted by the Orthodox Union at the Lincoln Square Synagogue on the Upper West Side. The event’s key takeaway: There’s no place for antisemitism in this country, least of all in New York.

“This is our family. This is who we are as New Yorkers, we embrace everyone,” Hochul said at the convening, organized in response to rising threats and violence against the tri-state area’s Jewish communities.

Hochul announced a new statewide “Hate and Bias Prevention Unit” within the Department of Human Rights and running throughout all 62 counties “to educate and also be an early warning system.”

“This is going to be a taskforce that is going to go all over the state of New York and have meetings convened, and bring together stakeholders and the trusted voices that can rise up with us,” Hochul said. “So count me in. I will be there with you every step of the way. To protect, unite, call out and ultimately eradicate antisemitism in our lifetime.”

“We’re living in a time of unprecedented levels of antisemitism,” OU Advocacy Center Executive Director Nathan Diament told Jewish Insider. “The good news is that government leaders, within the federal government and state and local governments, have spoken out very forcefully against it. But those statements have to be married with concrete actions…so convening community leaders with the secretary of homeland security, the governor, the mayor, etc., is a critical moment to really…push towards practical steps.”

The speakers gave impassioned speeches on the state of antisemitism — both Schumer and Mayorkas also added personal stories of their families’ connection to the Holocaust — emphasizing it as a “human issue,” not just a Jewish one.

“There is no such thing as a small act of antisemitism…It reverberates throughout our community, our country and even the world,” said Mayorkas, who, in a nod to the 50th anniversary of his bar mitzvah on Dec.9, wore the same kippah donned by his father during the celebration. “We must respond accordingly.”

The responses, Mayorkas added, not only include generating additional funding for prevention programs, but holding “the perpetrators of targeted violence, of whatever scale, accountable.” Adams mirrored accountability sentiments in his own speech, noting the “three categories” it will take to “win this battle” over antisemitism.

Category one, he said, is to “look at the historical relationships between communities” — Adams mentioned in particular the Black-Jewish relationship, noting those who had marched with Martin Luther King Jr. during the Civil Rights movement — as well as building new relationships by visiting, talking and learning from other groups. Category two is to have zero tolerance for perpetrators of hate crimes — Adams, who spent 22 years working for the NYPD, emphasized the need for a “no plea-bargaining rule if you are arrested for hate crimes.” The third category, which Adams said he believes is most important, targets individuals who use social media to spread hate anonymously, and the platforms that host them — “We have to have a full-frontal assault on social media and the platforms that are spewing this hate.”

“‘Never again’ cannot be at the completion of the task, ‘never again’ must be at the beginning of the task,” Adams said. “History is going to reflect on this moment and they’re going to ask, ‘Where were you when these attacks were happening?’”

Schumer, the highest-ranking Jewish elected official in American history, also spoke of recent and rising antisemitic attacks, adding that politics need to be removed from the issue.

Schumer ended on a hopeful note, however, saying a prayer for an antisemitism-free future and maintaining America as a land of tolerance.

“The roots of tolerance go deep, I would argue deeper than the roots of bigotry in America,” Schumer said.

“You have friends, you have allies, you have people who are deeply committed to ensuring that we fulfill our moral responsibility…and each of us, Jewish or non Jewish, have to lift up the voices of all and to stand when an arm is raised or a voice is spewing out evil words, that we stand up,” Hochul concluded.