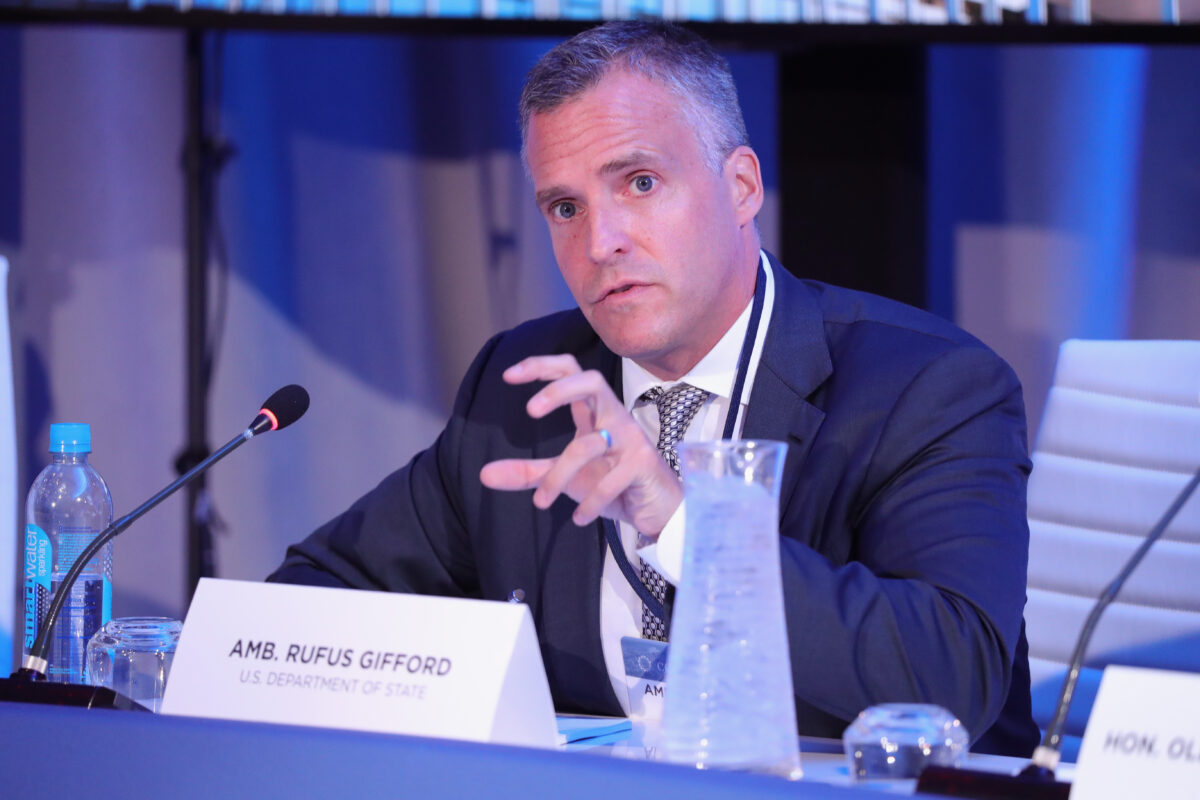 To Ambassador Rufus Gifford, chief of protocol for the U.S., the most important aspect of foreign policy is human relations. Building bridges between countries, he says, is the “backbone” of diplomacy, a mission he’s oriented his career around.

“In essence, we’re the primary liaison between foreign governments and the Biden administration,” Gifford said of his current position during a recent interview with Jewish Insider’s “Limited Liability Podcast” co-hosts Rich Goldberg and Jarrod Bernstein. “We try to create an environment in which diplomacy can thrive.”

Gifford likes to get creative when it comes to throwing events, utilizing some of the presidency’s more VIP venues, including the Blair House, the president’s official guest house, which Gifford also oversees.

“The power to convene, the power to bring people together in these remarkable venues, there’s so much value in that, and it’s something that I think we overlook or we don’t think about enough. So when I think about the spectacular venues, and for those of you who have not been to Blair House, it is…one of the most beautiful, beautiful buildings that the U.S. government owns, and as far as I’m concerned, that should be shared,” Gifford told JI. “So we’re going to try to think about this a little differently, try to open it up and share it with our foreign guests, and use it as an opportunity to really advance Biden administration foreign policy by utilizing that sort of the soft power that comes inherently in many ways with doing an event at Blair House.”

That power of convening extends to a range of communities. On Oct. 12, Gifford helped to put on the first-ever Sukkot celebration at Blair House, complete with an on-site sukkah.

“We had this idea to partner with the special envoy to combat antisemitism [Deborah Lipstadt] and her office to…not just try to preach to the converted [about the work she and her team are doing] — which I think is oftentimes such the mistake that we make in government, is that we’re oftentimes just talking to the same people that agree with us anyway — so how can we think about this a little bit different? But how can we also do it in a way that’s a little bit softer, how can we celebrate over a meal? How can we enjoy ourselves while having a substantive conversation? And that’s where this all came from,” Gifford explained. “So we built the sukkah outside, we got Doug Emhoff, the second gentleman, to come, in addition to the special envoy to combat antisemitism, the ambassador-at-large for religious freedom at State [Rashad Hussain], as well as most [of] the ambassadors we invited were potentially not the ones you’d expect. It wasn’t just the Israeli ambassador, who of course was there with his spouse, but also mostly Arab state ambassadors, and many of whom had never been to an event like this, had never stood under a sukkah before.”

“And we had this conversation and we had this debate and it wasn’t about necessarily just getting a public diplomacy message out there, that was part [of it], but it was also about advancing a larger Biden administration narrative about the rise of antisemitism in the world, both frankly at home and abroad, and what we can do as the global community to fight it,” he added. “It was a very thoughtful and positive event, and we got to eat some delicious food and learn a little bit about a holiday that, over the course of my life I had had one meal, one Sukkot meal, but I learned a little something and I think we advanced American foreign policy at the same time and that’s pretty damn exciting.”

Gifford’s team also put on the first-ever Pride event at Blair House and, like with Sukkot, made sure the guest list included dignitaries on both sides of the conversation.

“We didn’t just invite, you know, the Brits and the Canadians and the Dutch and the Scandinavians, [we] invited countries from around the world who may not be all the way there as it relates to LGBT equality,” Gifford said. “We want to try to advance this, these arguments, we want to try to push them and we want to try to get people to think about them differently.”

Luckily for Gifford, stale and sterile have never been in his nature. During former President Barack Obama’s second term, Gifford was named the U.S. ambassador to Denmark, and, in a unique strategy to further foreign policy, became the subject of a Danish reality TV show — Gifford prefers the term “documentary series” —  “I am the Ambassador.”

“It is easily the most unexpected thing that has happened to me over the course of my professional life,” Gifford attested.

“When I arrived in Denmark, which was the end of 2013, what I learned really quickly is that there was a whole generation of Europeans, and largely sort of left-leaning Europeans, that had lost interest or trust in the transatlantic relationship led by the United States,” he said. “What I really wanted to try to do is engage a new generation of Europeans and try to talk about American diplomacy in a way that they would listen and not just preach to the choir.”

The show, Gifford added, humanized his role in a way that helped the Danes feel more comfortable with him.

“I believe it helped advance American foreign policy at the time, because of our ability to connect with the public and make people in general fond of the work that we were doing in Copenhagen,” Gifford said.

Similarly, in his current role as chief of protocol, Gifford believes in the importance of finding and creating those joyful moments that bring people together even if they don’t directly help to advance American foreign policy.

“I believe this is partly a mandate of mine in this job, so I will continue to try to find those little moments over the course of this. It might not be a reality TV show, but I think you can do it in different ways.”