The father of Malki Roth, a victim of the 2001 Sbarro attack in Jerusalem, talks about keeping his daughter’s legacy alive and his fight to get her justice two decades on 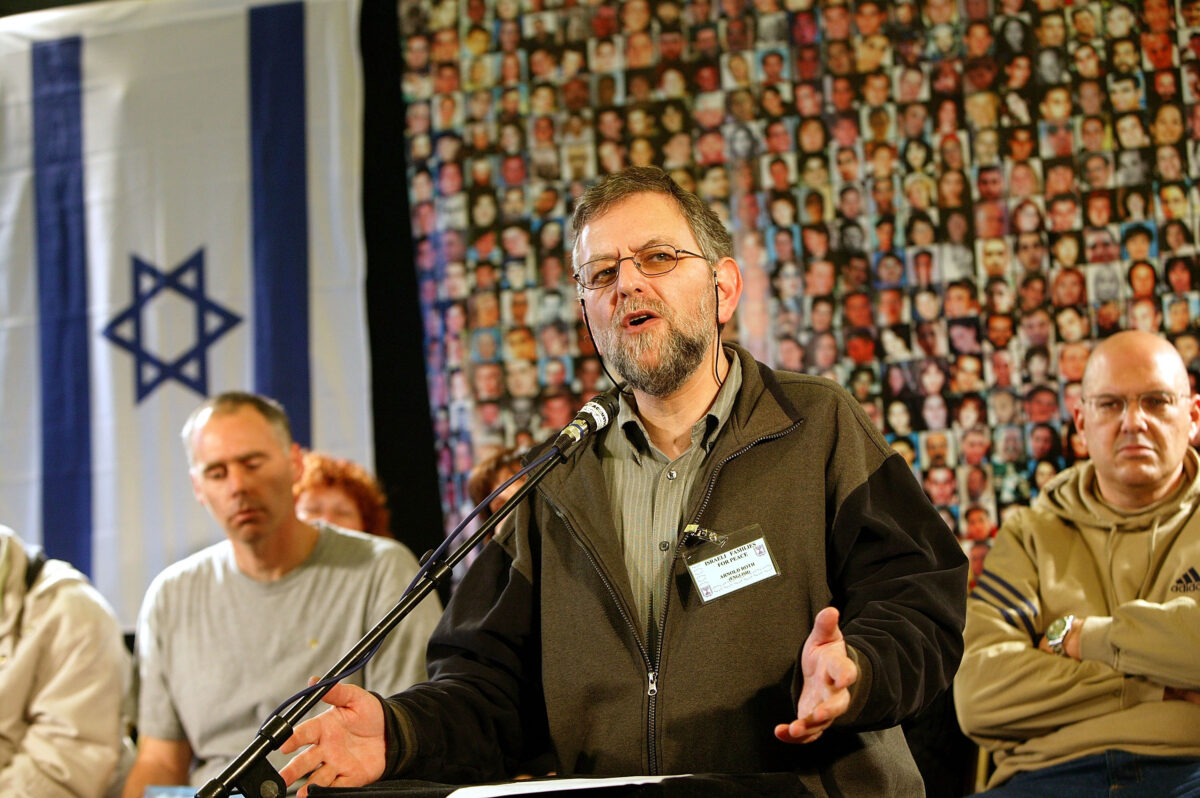 Arnold Roth (L) of the foundation Israeli Families for Peace speaks to the press in front of a wall of pictures displaying Israeli victims in February 22, 2004, in The Hague, The Netherlands.

On Aug. 9, 2001, in the late afternoon of what had been a typical day in Jerusalem, families gathered for lunch, as they often did, at Sbarro on the corner of Jaffa Road and King George Street. A bustling area, the kosher pizzeria was a particularly popular spot among neighborhood children and members of the area’s religious communities. That Thursday, the restaurant was packed. Fifteen-year-old Malki Roth, a citizen of Israel, Australia and the U.S., was there with her best friend.

At the same time, Malki’s father, Arnold Roth, the head of a drug development company, was taking his lunch break amid an afternoon of nonstop meetings. He had just finished when, around 2 p.m., he answered a call from his wife screaming into the phone. There had been an attack.

Malki, her best friend and 13 others — mostly young mothers and children — were killed when a Hamas terrorist entered the restaurant and detonated a bomb, killing himself in the process. An additional 130 people were injured.

In the 21 years since Malki’s death, Arnold and Frimet Roth have worked tirelessly to preserve her memory and seek justice for their daughter, creating the Malki Foundation (Keren Malki) in her honor. This week, on the most recent episode of Jewish Insider’s “Limited Liability Podcast,” co-hosts Rich Goldberg and Jarrod Bernstein were joined by Arnold to talk about Malki: her life, her tragic death and the family’s efforts to hold her murderers accountable.

Below are excerpts from the conversation:

Roth: Malki was the youngest of the four children that we brought with us from Australia when we moved to Israel in the summer of 1988, she was just 2 ½ years old. [In] 2001 she had just finished 10th grade, had acquired the leadership of a group of girls through a youth group and had proven herself to be terrifically good at this, and was an advocate for change in her own circle in the school, in the social setting, for children with disabilities. I mentioned that, because the youngest of our children, who lives with us today and who was born 10 years after Malki, is catastrophically disabled. And Malki was somebody who just looked right past that and saw a sibling, a sister whom she adored. That was actually a large part of her personality. She was always smiling and very engaged with other people, just a wonderful human being to be around.

Bernstein: Twenty years ago seems like a long time, but in many ways, it’s like yesterday. So many of us came of age in that time; I remember the Sbarro bombing pretty vividly. Take us back to that day and the days that followed.

Roth: At around 2 o’clock I got back from lunch, my wife was on the phone, and she was shrieking into the phone, something I’m not at all used to, and she said that there had been a “פיגוע” — a terror attack — in the center of Jerusalem. She knew that because she was on the floor with our youngest child watching CNN, and her message was, “I can’t reach the children,” and then she hung up. Naturally, like everybody else in Jerusalem, I reached for my phone and called all of my children one after the other… And I found very quickly that the cell network had gone down…An hour later, I still hadn’t reached Malki and I had spoken to the other children. And from there it was just a movie plot that just got darker and blacker and more awful…

Around 5 o’clock, 5:30 that afternoon, this is the ninth of August 2001, and the downstairs neighbor, [a] lovely lady who’s no longer alive, came up the stairs with an awful look that I’ll never forget on her face, and she said, “Michal is dead.” Michal was our daughter’s best friend and we knew that they were together, and we hadn’t had any status update. Well, the television had provided the first status update, so we knew we were in something that was more worrying, more catastrophic than anything that I think we were prepared for. And so it went until 2 in the morning. Two in the morning, our two oldest sons had been accompanied by a social worker, they went down to the government forensic center in Yaffo near Tel Aviv, and at roughly 2 o’clock they phoned home from there and they said they had found Malki. And that was, as you can imagine, just one of those moments you never forget.

In the case of Ahlam Tamimi, the woman who as we now know and certainly did not know at the time, had found the site, sought it out because of the large number of Jewish children in a strictly kosher pizzeria in the center of town on a school holiday. She has been, in effect the poster child, for the redemptive value of murdering Jewish children…She was arrested, charged, convicted and sentenced to 16 terms of life imprisonment…with a strong recommendation by the panel of three judges, that there be no circumstances under which should ever be released or have a shortened sentence.

Of course, that’s not the way it played out. In 2011, with the euphoria around the release of [kidnapped IDF soldier] Gilad Shalit and a government deal between Israel and Hamas, she walked free against our deeply, deeply bitter opposition to her being released. But it was useless, no one was interested, no one listened, and we were really talking, in addition to talking to the international media, we were talking to the wall. She went back to Jordan, which is where she came from — she was a Jordanian citizen born and bred, her father served in the Jordanian army — and she arrived back in Jordan as a genuine, certifiable VIP. She was very quickly caught up in public appearances all over the kingdom, and then later throughout the Arab world. And starting in February 2012, so we’re talking now, three months, three or four months after she was given back her life through the Shalit deal, she began a TV career as a presenter of her own program.

Bernstein: What is the Jordanian position, given the [1995 U.S.-Jordan extradition] treaty given that the facts here really aren’t in dispute in any way, shape or form?

Roth: The Jordanian position was articulated six days after the charges were unsealed in March 2017, so that on the 20th of March, the highest court for this purpose…in Jordan, pretty much out of the blue from the point of view of the American Embassy and me, handed down a ruling that the 1995 extradition treaties entered into between Jordan and the United States, or more particularly King Hussein, the father of today’s King [Abdullah II], and the Clinton administration, was invalid…

To jump to the bottom line, it’s been so infuriating to us [to] not get support and the shoulder-to-shoulder that I was talking about before, that we actually litigated. We filed an application under the Freedom of Information Act in the United States asking the State Department to hand over the documents that related to that extradition treaty of 1995, which, by the way, the United States continues to regard as being valid, and we were ignored. We filed papers a second time, and we were ignored. And then we decided we’re going to sue the U.S. government. And we did, and we got a settlement almost immediately, almost as if they were waiting for us to do this, but by this time it had taken us several years, and then we got the documents…And the most key of the key documents is a document of ratification of the treaty signed in the personal hand of King Hussein, who talks about God ensuring that no one will ever come to undermine the treaty in the future…

The bottom line of all of this is that Jordan is telling whoppers when they say they don’t have to hand her over. But the much more worrying thing, because in the end I don’t really care what the Jordanians say, is that the United States government seems to be perfectly OK with saying in a very quiet voice, “We’re asking for the extradition to happen and that’s the law,” and in a much larger voice saying, “Hey, the Jordanians, they are our buddies in the Middle East.” President Biden, and he’s not the only one in this story whom I’m going to invoke as president of the United States. I could say the same about Obama and about Trump, almost word for word, but President Biden has now taken several opportunities to say, “King Abdullah is a loyal friend in a tough neighborhood.” And I’m sorry, but I’m fed up to the back teeth with that kind of empty throwing around of slogans. Talk about tough friends when they’ve handed over the people they’re obliged to hand over under bilateral treaties. That’s not what’s happened.

Roth: This has not, a) weakened in the smallest way, my devotion or that of my wife and our family to Zionism. We know why we’re living in Israel…we came here to raise our children in Israel, and we love what’s happened, we are happy, and we have children and grandchildren living here…So, it has not changed our connection to Israel in the smallest way. But it has sharpened, I would use the word contempt, the contempt that I personally feel towards politicians in multiple places and multiple levels of seniority.

Bonus — Malki’s favorite things: “Malki loved music. She was terrifically talented, she played in the Jerusalem Youth Orchestra briefly. She was a classical flutist, and after she was already gone, and in the shiva house when we were sitting in our home with many guests coming to comfort us, we learned that she had written a song. That song is on the website of the Malki Foundation…

“The most meaningful way that we have found for, a) dealing with the profound pain of losing Malki and, b) forcing people to remember her life, has been by creating a charity in her name, which is really very active today…

“Malki loved music. She had this wonderful song which has now gone to every part of the world and has different versions of it, but the musical spirit that she carried with her is something that really sustains us…I want people to know about the happy side of Malki’s life. She wasn’t an unhappy person, she left behind unhappy people, her parents, but that she was really an uplifting, inspiring kind of person, and the Malki Foundation really carries on the spirit of inspiration, the wonderful things that she did for children with disabilities.”

Learn more about the Malki Foundation and listen to multiple versions of Malki’s song on the Keren Malki website.