More details are emerging about President Joe Biden’s upcoming trip to the Middle East. Biden touches down at Ben Gurion Airport on Wednesday afternoon local time. We’ll bring you on-the-ground coverage from his visit as it happens. Here’s what we know so far:

A U.S. officialsaid that Biden will push for the reopening of a consulate in Jerusalem to serve Palestinians, despite confirmation from an Israeli official that discussions over the issue are not on the agenda. He’ll also participate in a four-way virtual summit with Israeli, Emirati and Indian leaders.

Meanwhile, the U.S. turned down a request from Israel to have Israeli officials accompany Biden on a visit to an East Jerusalem hospital, scheduled for later this week.

The administrationis considering lifting its ban on offensive arms sales to Saudi Arabia, days before the president is set to visit the Gulf nation.

Frimet and Arnold Roth, whose daughter Malki, a U.S. citizen, was killed in a 2001 terror attack in Jerusalem, are seeking a meeting with Biden this week as part of a yearslong effort to pressure Jordan to extradite a woman convicted in the killing to the U.S. to stand trial. Ahlam Tamimi was released by Israel in a 2011 prisoner swap, and has since become a popular television personality in Jordan.

Former New York City Mayor Bill de Blasio, now mounting his first House bid in the redrawn 10th Congressional District, spoke out against a Democratic primary rival, state Assemblywoman Yuh-Line Niou, who has expressed support for the Boycott, Divestment and Sanctions movement targeting Israel. “The vast majority of us who are Democrats, the vast majority of us who are progressives, don’t agree with her,” de Blasio told Jewish Insider’s Matthew Kassel. “We support the State of Israel. We oppose BDS.”

Rapid response: De Blasio was responding to an interview, published by JI on Monday, in which Niou endorsed the BDS movement for what appears to have been the first time since she assumed office in 2017. “I believe in the right to protest as a fundamental tenet of western democracy, so I do support BDS,” said Niou, who, along with de Blasio, is among at least seven leading candidates in the hotly contested race for an open House seat encompassing Lower Manhattan and parts of Brooklyn.

Broader backlash: Niou is the only Democrat in the race who has publicly supported the BDS movement, which holds only fringe support within the House. Since her comments were published, she has faced criticism from a range of elected officials including freshman Rep. Ritchie Torres (D-NY), the Bronx congressman who identifies as a pro-Israel progressive. “BDS is not merely a ‘protest,’” he wrote on Twitter. “It takes the sinister position that Israel should no longer exist as a Jewish state. It’s an eliminationist movement at its core, one that should itself be protested by any public official professing a concern for peace.”

Bonus: New York State Assemblymember Brian Cunningham announced he was withdrawing his endorsement of Niou over her support of the BDS movement.

At the height of his fame, Jason Kander was considered a rising star in the Democratic Party and a lock for higher office — maybe even the White House. After an oh-so-close defeat in the 2016 Missouri Senate race to incumbent Republican Roy Blunt, Kander spent the next few years fueling 2020 presidential primary speculation with trips to Iowa and New Hampshire. But just as quickly as it began, the dream faded. In 2018, Kander declined to run for president, then unexpectedly ended a campaign for Kansas City mayor, announcing a need to address symptoms of post-traumatic stress disorder and depression. The next day he checked into a Veterans Affairs hospital, where the Afghanistan veteran was placed on suicide watch.

Seeking help: “That day felt just like utter defeat. I had been building something for a decade and I knew what the rest of the world didn’t know,” Kander, who details his struggles in a new book, Invisible Storm: A Soldier’s Memoir of Politics and PTSD, recalled during a recent interview on Jewish Insider’s “Limited Liability Podcast.” “I just remember feeling like a failure, and scared because I didn’t know what my future held, not just from a career perspective, but from a personal perspective,” he said. “I had no idea if I could get better. I knew that I was trading in the only thing in my life that was going well, my career, for the chance at getting better, having no idea if I could.”

Just meetings: For years the seeming normality of his service experience kept Kander from recognizing the trauma he faced. “I was an intelligence officer who took meetings with people who we suspected of being bad guys pretending to be good guys and I thought, ‘That’s not war, I just went to meetings,’” he explained, adding that he believed his lack of live-fire experience meant he “didn’t earn PTSD.”

‘Most dangerous place on the planet’: “Now, cut to 11 years later, somebody at the VA sits me down and says, ‘OK, let me get this straight: You were in the most dangerous place on the planet, you were practically by yourself, just you and a translator, you were vulnerable as all as all heck for hours at a time. And you were in meetings with people who might want to kill you and nobody knew where you were, so nobody was coming to save you.’ And I’m like, ‘yeah’ and they’re like, ‘Yeah, that’s combat and it’s really traumatic.’”

Extending a hand: Since the end of his tour in the Army Reserves in 2007, Kander has rebuilt his life with an eye toward his past experience. He currently serves as president for national expansion at Veterans Community Project, a Kansas City-based nonprofit that supports homeless veterans by providing housing, social and health services. “We have an 85% success rate of getting people from homelessness to being successfully housed and staying there, which is about twice of what is considered really good for the world of transitional housing out of homelessness,” Kander added proudly.

Read the full story and listen to the full podcast here.

U.N. to review reports of torture carried out by the Palestinian government

For the first time, a United Nations committee focused on addressing torture will scrutinize the actions of the Palestinian Authority and its treatment of those under its care. The U.N. Committee against Torture (CAT) — a subsidiary of the U.N. Office of the High Commissioner for Human Rights (OHCHR) — convenes today in Geneva, where it will investigate instances of enforced disappearances, violent interrogations and the holding of the remains of Israeli soldiers, among other issues, Jewish Insider’s Matan Kogen reports.

What to expect: CAT, which holds broad powers to probe incidents of torture and cruel treatment, is expected to review reports submitted by American, Palestinian and Israeli NGOs, including Human Rights Watch, the Palestinian Coalition Against Torture, the Hebrew University of Jerusalem’s Clinic on International Human Rights and others.

Session prep: In preparation for this session and in accordance with the Convention against Torture and Other Cruel, Inhuman or Degrading Treatment or Punishment (from which CAT derives its authority), the Palestinian Authority (PA) was required to submit a report of its current adherence to the convention.

🗳️ Breakaway: In Bloomberg, Zev Chafets suggests that President Joe Biden’s upcoming visit to Israel provides an opportunity for former Prime Minister Benjamin Netanyahu, who hopes to resume his old post, to make a clean break from his once-close relationship with former President Donald Trump. “Bibi no longer needs Donald Trump. Bibi’s voters belong to him. Trump, in Israeli politics, was just a prop. In the US and the wider world, being linked to Trump would be a legacy killer. Bibi would love to see him disappear. How? After their meeting this week, Bibi should publicly praise Biden. He can let it be known that despite his gratitude toward Trump, Israel has many ardent friends in Washington — including Republicans such as Mike Pompeo, Nikki Haley, Tom Cotton and Mike Pence — all of whom happen to be presidential aspirants. It would make headlines, distance Bibi from Trump and give timid Republicans a chance to see that it is actually possible to shoot at Santa Claus.” [Bloomberg]

💌 The Diva of Divorce: The New Yorker’s Naomi Fry interviews divorce attorney Laura Wasser, who garnered a reputation for representing Hollywood’s elite. “​​She has represented some of the biggest celebrities of the past generation: Britney Spears during her split with Kevin Federline, Angelina Jolie during her divorce from Brad Pitt, Johnny Depp during his divorce from Amber Heard, and Kim Kardashian during her divorce from Kanye West, among them. The gossip Web site TMZ has dubbed her ‘the disso queen’ for her facility in dissolving the unions of the rich and famous, and she is often featured on that site and on others like it, in conjunction with the relationship travails of her clients. (She begins every morning, she told me, by reading the Daily Mail, ‘where I get all my news.’) As managing partner at her firm — which was established by her father, Dennis Wasser, also a divorce lawyer — she is currently overseeing about a hundred cases. Wasser, Cooperman & Mandles’ offices were featured in Noah Baumbach’s 2019 divorce drama, ‘Marriage Story,’ and Wasser was reportedly an inspiration for Laura Dern’s character in the movie, a kittenish attorney with a killer instinct.” [NewYorker]

💊 Teva Trial: New York Attorney General Letitia James accused Teva Pharmaceuticals of lying about the extent of its operations in the U.S. in an effort to evade trial.

⚖️ Property Battle: The village of Atlantic Beach, N.Y., is attempting to use eminent domain to seize two parcels of land purchased by the local Chabad for nearly $1 million last year.

🛫 Friendlier Skies: El Al will restore its pilots’ salaries to pre-pandemic levels, following negotiations to end months of labor shortages and flight cancellations brought on by the pilots’ protests.

✈️ Taking Off: Russian President Vladimir Putin will travel to Tehran next week for trilateral meetings with leaders of Iran and Turkey, as National Security Advisor Jake Sullivan said U.S. officials believe that Iran is preparing to deliver hundreds of armed drones to Russia.

🇮🇷 Detained: Iran is detaining three people — an activist and two filmmakers — and charging them with acting against national security.

King Felipe VI of Spain meets with a delegation from the American Jewish Committee last week at the Zarzuela Palace in Madrid. 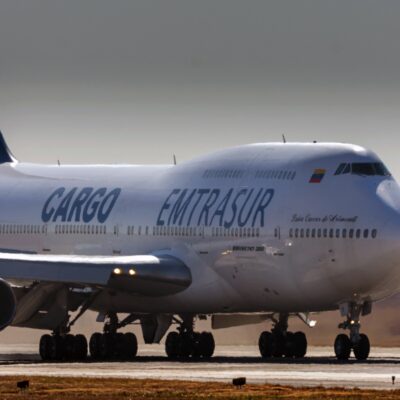 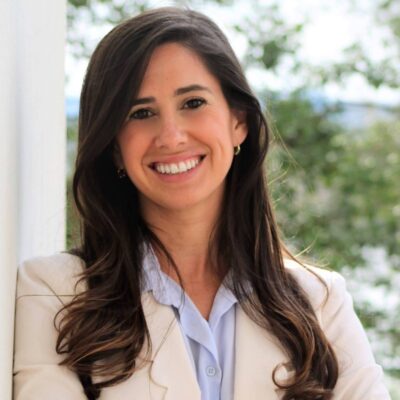 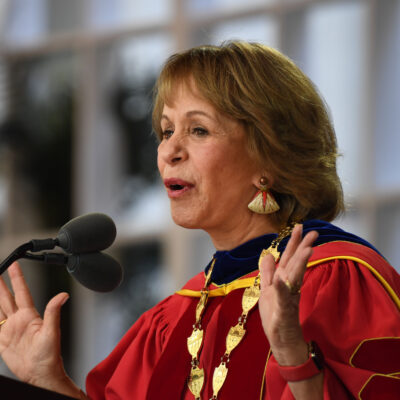