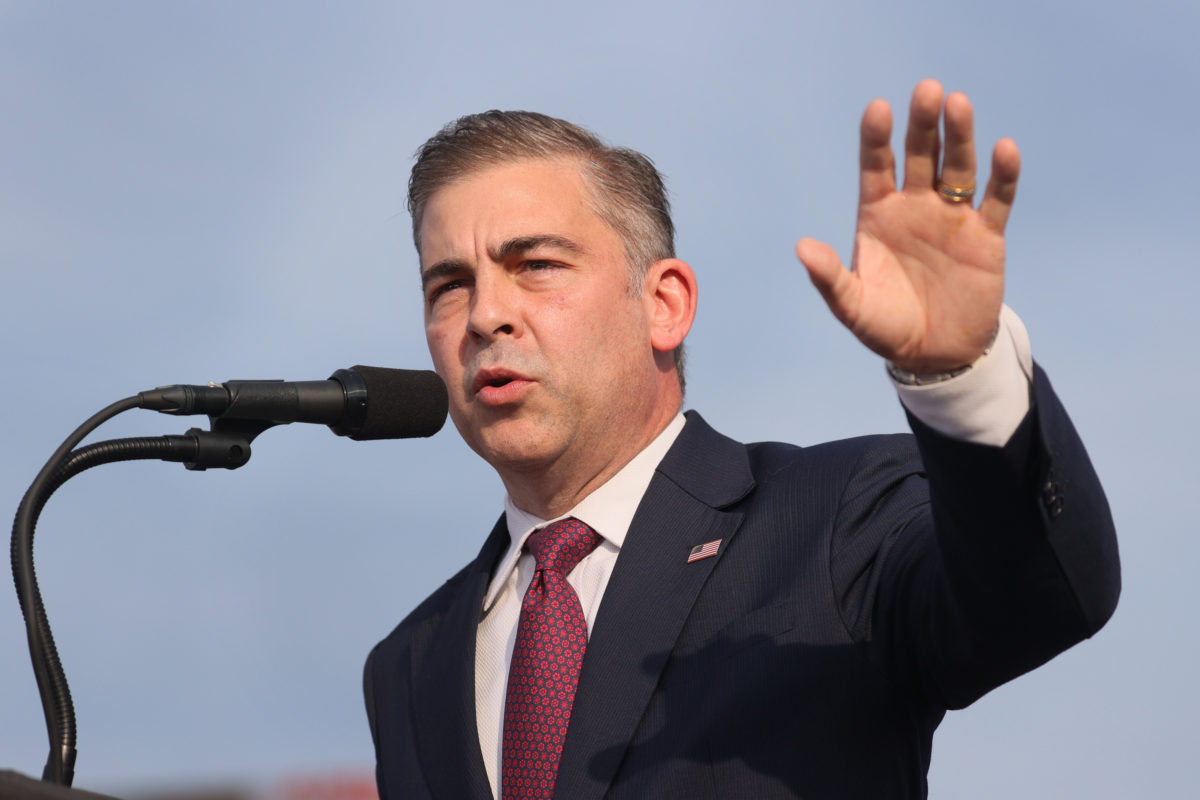 Mike Carey speaks at a rally hosted by former President Donald Trump after receiving his endorsement on June 26, 2021 in Wellington, Ohio. Carey is running for a seat vacated by former U.S. Rep. Steve Stivers in Ohio's 15th Congressional District.

“Great Republican win for Mike Carey,” the former president boasted in a statement on Tuesday night. “Big numbers! Thank you to Ohio and all of our wonderful American patriots.”

Carey, a former executive at American Consolidated Natural Resources, cast himself as a political outsider in the crowded race to succeed former Rep. Steve Stivers (R-OH), a moderate Republican who retired in May to lead the Ohio Chamber of Commerce. Stivers had endorsed Ohio state Rep. Jeff LaRe, who fell short of first place by a double-digit margin.

In some ways, Carey’s victory represents a rebuke of the establishment wing of the GOP as Trump sets his sights on the 10 House incumbents who voted to impeach him in February. But the results were hardly resounding, despite a June internal poll showing Carey with 52% after voters were informed of the Trump endorsement.

“Trump will claim credit for this, but Carey fell well short of a majority,” said Paul Beck, a professor emeritus of political science at The Ohio State University.

Carey disputed that view in a statement following his victory on Tuesday. “Tonight, Republicans across Ohio’s 15th Congressional District sent a clear message to the nation that President Donald J. Trump is, without a doubt, the leader of our party,” he said. “I could not be more grateful for his support, and I am proud to deliver this win to advance his America First agenda.”

While Carey raised the most of any candidate, he was operating at a significant disadvantage as outside groups poured money into the 11-way primary race and competing endorsements threatened to peel away support. Ron Hood, a former Ohio state legislator endorsed by Sen. Rand Paul (R-KY), was aggressively promoted by a Paul-affiliated political action committee.

Trump upped his involvement in the final weeks, speaking at a telephone town hall for Carey and releasing a combative statement attacking the crowded field of candidates without mentioning any of them by name.

“Numerous candidates in the Great State of Ohio, running in Congressional District 15, are saying that I am supporting them, when in actuality, I don’t know them, and don’t even know who they are,” the former president said. “But I do know who Mike Carey is — I know a lot about him, and it is all good. Mike Carey is the only one who has my Endorsement and he’s the one I feel will do the best job for Ohio, and for the United States. Please vote for Mike Carey next Tuesday, and let there be no further doubt who I have Endorsed!”

Carey, who is 50, touted his pro-Trump bona fides in an interview with JI last month, praising an “America first” agenda while decrying such right-wing bugbears as cancel culture and critical race theory. He also positioned himself as a fiscal conservative, arguing in favor of a balanced budget amendment.

The Ohio-born first-time congressional candidate was raised in a Jewish and Catholic home until the age of 10 and attended Jewish day school during that time. He credits that experience with influencing what he described as his strong support for Israel. “I learned to respect the Jewish culture and the religion, and I think that’s why you’re going to find that I am so committed to these Israeli issues and committed to Israel, because it was one of the founding building blocks of my life,” Carey told JI. “These are very personal issues.”

“Mike Carey knows the Jewish community from the time he was a kid,” Howie Beigelman, executive director of the nonprofit Ohio Jewish Communities, told JI on Tuesday after the election was called. “I think he also knows Israel can be a real partner to Ohio on reimagining our economy and rebuilding our workforce.”

Carey said he would build on the Trump administration’s Middle East foreign policy agenda, praising its role in brokering the Abraham Accords between Israel and a number of Arab nations.

“Most local observers believe he will be a pretty traditional Republican,” Brad Kastan, a pro-Israel advocate and co-chair of the Jewish Community Relations Committee in Columbus, told JI. “Carey has met with AIPAC, has spoken with pride of his Jewish roots and understands both the importance of the U.S.-Israel relationship while sharing our concerns with the current rise in antisemitism.”

Carey will compete against Allison Russo, a Democratic state legislator and healthcare consultant, in the November election.

“We look forward to working with whoever wins the general — be it Carey or Russo,” said Justin Shaw, director of Jewish community relations at the nonprofit organization JewishColumbus. “Both have been friends to the Jewish community and supportive of the issues that matter most to us.”

The odds are heavily tilted in Carey’s favor given the partisan makeup of the red-leaning district.